You are here: Home / Sports / Bullpen Can’t Hold up for Hamels, Rangers Lose to Giants in Extras 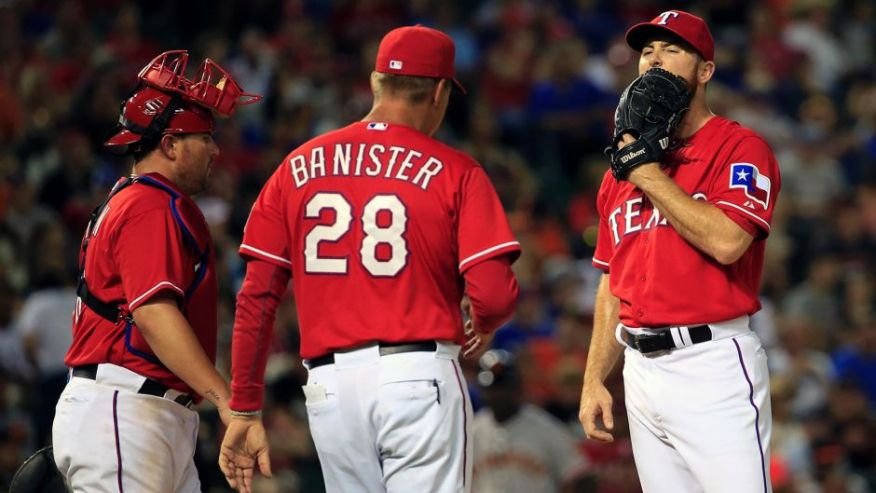 The trade for Cole Hamels led to an extra 8,500 people buying tickets for Saturday night’s Texas Rangers game to see him make his Texas Rangers debut.

If they stuck around long enough in the game against San Francisco, they saw an all-too-familiar scene.

A Texas bullpen that has the worst ERA in the majors couldn’t protect the lead for Hamels and the Giants eventually won with two homers in the top of the 11th to beat Texas 9-7.

Hamels left a 7-4 game with two outs in the eight and a runner on second. But Tanner Scheppers didn’t retire any of the three batters he faced and instead of a win Hamels got a no-decision in his first start for the Rangers.

The Rangers weren’t as lucky as Hunter Pence hit a solo homer off new reliever Sam Dyson to lead off the 11th and then two batters later Brandon Belt homered off Sam Freeman to complete a deflating loss for the Rangers.

It wasn’t the way the Rangers had drawn up the night but manager Jeff Banister had no issues with the start of Hamels or the pitching of Scheppers. Banister went to Scheppers despite the fact that Hamels was at just 97 pitches.

“A situation where, really, we wanted to give the bullpen some room, which we did,” Banister said. “Schep came in and really the only ball off the barrel was the slicing ball to right field. The fly ball to center field, we’re playing in a no-doubles situation there. Didn’t get to the ball. The ball got away and allowed the runner to get to second base. And then made a good pitch to Pence and [he] went down and flipped the ball into the outfield, just far enough out of our reach. So, really felt like Schep did, he made some good pitches and just came out on the wrong end.”

Scheppers, who now has a 5.66 ERA, felt like he let Hamels down.

“It was definitely unfortunate,” said Scheppers. “I definitely wanted to go out there and Cole pitched a helluva game, did such a great job, went deep in the ballgame. I just wanted to go in there and get one out and it wasn’t my day.”

He wasn’t the only one who struggled. After working a scoreless 10th Dyson was touched for a run and then Freeman gave up his first run after not allowing an earned run in more than a month.

Despite losing a chance at a win Hamels believes he could have done more to help the Rangers. Texas had given up a 2-0 lead early and then he allowed three runs in the third.

“I got myself in a little trouble and I didn’t slow down the game in the third inning,” Hamels said. “Those guys were jumping all over pitches early and it’s understandable. They’re good hitters and they want to get those runs in as quick as possible. There are certain situations where you have to slow the game down and be a little smarter.”

Hamels allowed five runs on eight hits and struck out two. Saturday night marked just the second time he’s left a game this season in position to record and win and didn’t get one.

Banister had no issues with the way he pitched.

“Really, given everything involved, coming off the no-hitter, the volume of pitches he threw in the no-hitter, just everything swirling around the trade, the travel and getting him here, really been here for about a day and some change,” Banister said. “So, really felt like that he threw the ball well.”

Texas gave Hamels support by getting two RBI from Bobby Wilson and three from Mitch Moreland. Texas scored twice in the seventh to take the 7-4 lead, with Moreland bringing in a run on a sac fly and an error scoring another.

When it comes to ransomware, you don't always get … END_OF_DOCUMENT_TOKEN_TO_BE_REPLACED

Peyton Carr is a financial advisor to founders, … END_OF_DOCUMENT_TOKEN_TO_BE_REPLACED