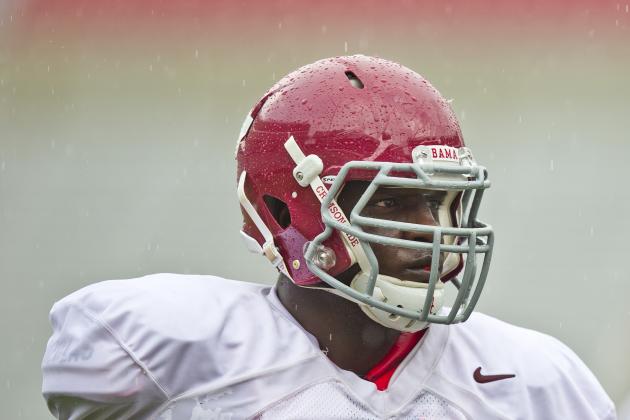 Matt Zenitz of AL.com noted Cam Robinson’s return to the practice field, saying the offensive lineman did not have any “noticeable limitations.” Saban later told Cecil Hurt of the Tuscaloosa News that Robinson “is fine.”

He also praised his star offensive tackle, noting “when he sets his mind to something he has a strong personality and is a strong, effective competitor,” per Alex Scarborough of ESPN.

“It was just a little knee sprain. I’m fine. I’ll be alright,” Robinson said, per Casagrande, who provided more:

“Yeah, I heard stuff about my foot, it wasn’t even my foot,” he said. “I heard some people saying stuff about broken foot, but it was just rumors. It wasn’t anything true about my foot or anything about that.”

“The trainers told me the brace was big,” Robinson said, “helped with the injury not being too bad.”

“It takes mental toughness and a little bit of that magic they work in the training room,” he said. “If you want to push though it bad enough, you’ll be able to play through it.”

Despite being just a sophomore, Robinson is one of the more talented offensive linemen in the country. A preseason All-SEC selection, he started all 14 games for Alabama as a true freshman and thrived, and he is expected to be a pillar on the line for the Crimson Tide this season.

His loss would have been a crippling one for Alabama, so Sunday’s news was certainly a relief for the program. The Crimson Tide simply can’t afford to lose a player as valuable as Robinson as they compete in the brutal SEC West.

When it comes to ransomware, you don't always get … END_OF_DOCUMENT_TOKEN_TO_BE_REPLACED

Peyton Carr is a financial advisor to founders, … END_OF_DOCUMENT_TOKEN_TO_BE_REPLACED