You are here: Home / World / Cars and Hikers Swept Away as Flash Flood Rages in Utah 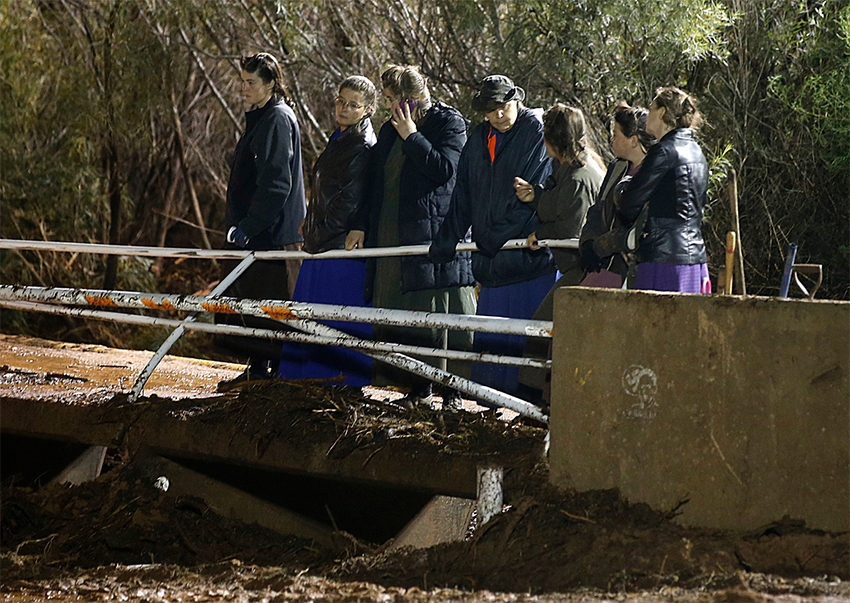 When the thunderstorms hit, it took only a few minutes for Short Creek to turn from a trickle into a lethal torrent, ripping through this community.

“A roaring river, just a wall of mud and debris, ripping up trees,” said Pamela Black, 63, whose house overlooks the creek. “We knew it would flood, because it always does when there’s a downpour, but never anything like this.”

“It is dry most any day of the year, but in this instance, there was a small flood starting in that channel,” said Kevin Barlow, the assistant fire chief of this small city on the Arizona border. “They hesitated and watched the flood for a minute and were backing up when a huge 300- to 400-foot-wide flash flood came around and even behind them.”

The names of the dead were not immediately released, but residents said that the victims, like many people in the area, were members of the Fundamentalist Church of Jesus Christ of Latter-day Saints, or F.L.D.S., a polygamous sect that split from the Mormon Church in the early 20th century. The longtime sect leader, Warren S. Jeffs, was convicted in Texas in 2011 of child sexual assault, and is serving a life sentence.

The victims were three adult sisters and their children, said Carolee Jessop, 47, who has lived her entire life in this small town, where many people are members of a handful of extended, intertwined clans. One of the two vehicles was a white passenger van, a common sight among the large families here.

The victims had been to Maxwell Canyon but decided to seek shelter when the storm struck, Philip Barlow, the mayor of Hildale, said Tuesday at a news conference. Seeming stunned, Mr. Barlow explained that the victims had been driving on Canyon Street in the northeast part of the city and were crossing a bridge when a fast-moving surge of water and debris rose from the creek below and carried them off.

“Most people, they entertain themselves with their children by just driving around,” Mrs. Jessop said. “We come up to the canyons a lot; we get water. It’s just a fun place to come. They must have just gotten caught in it.”

The vehicles were found a quarter-mile away, and some of the bodies were not found until Tuesday because they were carried far downstream into Arizona (one was five miles away). Three children were rescued from the vehicles; one was hospitalized and released Tuesday afternoon, the mayor said.

In Zion National Park, about 45 miles north of Hildale, a group of hikers were in a small, narrow canyon Monday when a storm set off flash flooding, according to the National Park Service. The storm dropped more than a half-inch of rain in an hour, and the hikers were on a route that required them to rappel distances of about 30 feet and swim through small pools of water, park officials said.

The bodies of four of the hikers were found, but their names were not immediately released because the family notification process had not been completed, officials said. Three hikers were still missing Tuesday.

Rangers realized the hikers had not left the park after their cars were found Monday night, officials said. A search began on Tuesday, but the effort was delayed by severe weather.

“The high water levels and continued rain showers pose further flash flooding concerns and have hampered searchers’ access to the technical portions of the canyoneering route,” the Park Service said in a statement.

In Hildale, flash flood warnings from the National Weather Service were broadcast on Monday, but many residents might not have seen them. Warnings were also sent by text message, but Mayor Barlow said that alert did not reach his phone until after the deluge.

“Around here, the floods have always been an entertainment,” Mrs. Jessop said. “It’s always so dangerous because children will run out there and run across the bridge. They cleared them off, and within a couple minutes, the water was over it. That’s how fast it was.”

Steady rain saturated the ground on Monday, and then two strong thunderstorms swept through in the late afternoon, dropping two and a half inches of rain in just two hours, said Lisa Verzella, a Weather Service meteorologist in Salt Lake City.

“There were trees coming down our road and huge rocks,” said Irene Jessop, 22, a common surname in a town where many bear some relation. “They’ve cleared all the major debris, but there’s about a foot of mud still on top of the road. The street we live on is very prone to flooding, and it happens every year, but never to this magnitude.”

Isaac Wyler, 49, returned on Monday night to his home in Colorado City, Ariz., next to Hildale, to find his neighborhood upended. “I saw, two streets down, a dump truck completely upside down,” he said. “I saw retaining-wall blocks, a couple of feet of solid concrete, about a half a mile from where it started.”

Emergency crews and about 500 volunteers searched for survivors and cleared debris Tuesday. Recovery work was hampered by wreckage that made many streets and driveways impassable and that clogged culverts that allow water to pass under roads. There was also the threat of another round of thunderstorms, and Mayor Barlow said the authorities had stationed people farther up the canyons to provide radio warnings of new floods.

Colorado City and Hildale were founded a century ago by a forerunner group to the F.L.D.S. and have long been known as polygamist havens where church leaders wielded enormous power.

Most of the land in both cities has for years been owned by the United Effort Plan Trust, created by F.L.D.S. leaders who effectively controlled municipal government. The cities were remote and small — their combined population is less than 8,000 — and for generations, both states largely left them alone.

In the past decade, though, the authorities have been more aggressive toward the church, prosecuting Mr. Jeffs and other leaders. Utah took over the trust, and has been working to strip it of some of its power by establishing individual ownership of homes.

When it comes to ransomware, you don't always get … END_OF_DOCUMENT_TOKEN_TO_BE_REPLACED

Peyton Carr is a financial advisor to founders, … END_OF_DOCUMENT_TOKEN_TO_BE_REPLACED