You are here: Home / Entertainment / Celine Dion drops her Jupiter Florida House in Half! 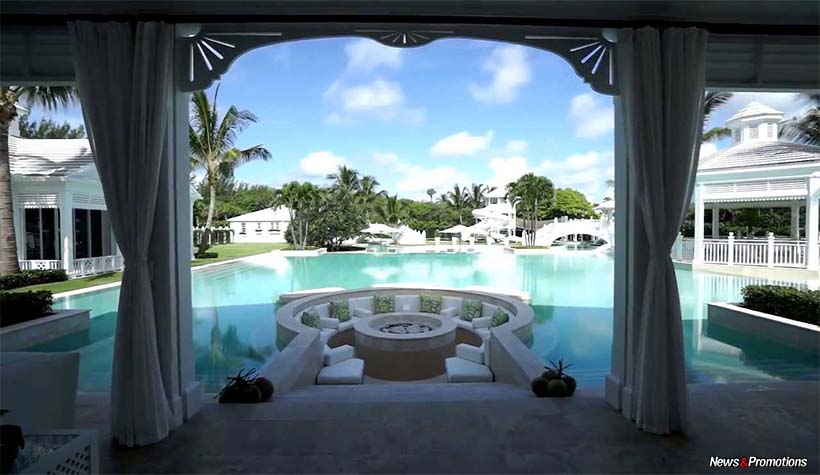 The Canadian diva Celine Dion, dropped the price of her Palm Beach (Florida) property, from 72,5 million dollars to 38,5 million. The reason is the difficulty of finding a buyer, according to the EFE. The luxury property is situated on the Atlantic Ocean’s shore and it has an area of 10,000 square feet. Kid Rock and Michael Jordan also have properties here. The mansion has two interconnected pools with two sliders, water gun stations, bridge over a river and a water park. The third pool is at the property’s rear. The main house has 930 square meters and two rooms for children, each of them with own bathroom and a main bedroom, view to the wharf and a hydro-massage bathtub. The home is built in the Bahamian-style, has five en suite bathrooms and five bedrooms, a living room with screened-in porch, an elevator, a guest wing and a media room.

It also has two decks, one with a hot tub and one with a fireplace. In the master suite, the buyer will find a walk-in closet with an automated shoe carousel and automated clothing rack. Dion’s property has its own waterpark, tennis court, a beach house with massage room and sleeping loft as well as a guesthouse with eight bedrooms. The garage can welcome seven cars. Celine and her husband Rene Angelil built the property in 2010 before she gave birth to their twins.

They knocked down the existing property to build the actual mansion. The couple had complaints from the neighbors when they built the water park because of the huge quantity of water used by the park. Celine Dion also sells the mansion because she spends the most of her time in Las Vegas where she sings at the Cesar Palace. Her contract with the casino was extended to 2019.

When it comes to ransomware, you don't always get … END_OF_DOCUMENT_TOKEN_TO_BE_REPLACED

Peyton Carr is a financial advisor to founders, … END_OF_DOCUMENT_TOKEN_TO_BE_REPLACED