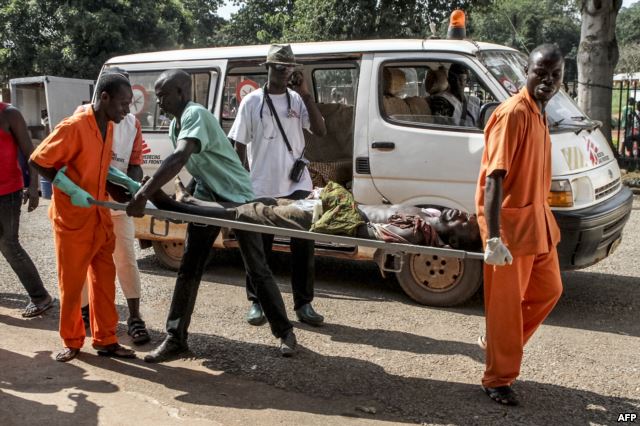 At least two people died in clashes between gangs and militias in Central African Republic’s capital, where peacekeepers and pressure from international leaders have failed to halt more than two years of violence, witnesses said.

Mourners brought one of the bodies to Bangui’s main morgue in a cart early on Wednesday, the latest victim in a five-day outburst of fighting between U.N. peacekeepers and Christian, Muslim and other groups, the worst the city has seen this year.

The fresh violence has raised doubts about plans to hold elections on Oct. 18, meant to restore democracy in an impoverished country at the heart one of Africa’s most combustible regions following a rebellion and years of turmoil.

One of the dead was killed in a mainly Muslim district and the other in a clash near the airport, witnesses said, without giving further details.

Officials say at least 39 people have died since Saturday, but streets appeared calmer on Wednesday.

Seleka stepped aside the next year, under pressure from the United Nations and former colonial ruler France, clearing the way for an interim government led by President Catherine Samba-Panza. But reprisals and counter-attacks have continued.

Samba-Panza left the U.N. General Assembly on Tuesday to deal with the violence and spent the night in neighboring Cameroon. There were no details on when she would return.

Hundreds of people rallied in a city square for a planned march calling for the restoration of a national army, then dispersed when organizers called the protest off.

“We have decided to put off our demonstration until another date because people of bad faith have decided to infiltrate it to give our movement to give it a bad name,” Gervaise Lakosso, coordinator of the Civil Society Working Group, told Reuters.

The army was sidelined after Seleka seized power. The U.N.-backed interim government has yet to rearm it after officers were linked to the largely Christian anti-balaka militia that conducted reprisals against Muslims after the coup.

Interim president Samba-Panza has said the unrest is being stoked by supporters of ousted president Francois Bozize, who was forced into exile by Seleka in 2013.

When it comes to ransomware, you don't always get … END_OF_DOCUMENT_TOKEN_TO_BE_REPLACED

Peyton Carr is a financial advisor to founders, … END_OF_DOCUMENT_TOKEN_TO_BE_REPLACED