You are here: Home / Sports / Champions League Final Is Just Latest Moment in Spotlight for Olympiastadion 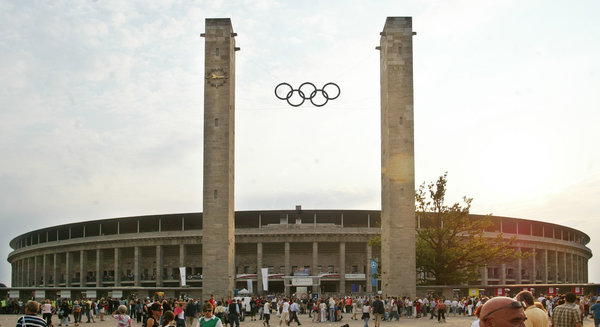 A legendary track performance in front of Hitler. A record-breaking baseball game. The most famous head-butt in sports. Guns N’ Roses and the N.F.L. Europe.

When the Champions League final comes to the Olympiastadion in Berlin for the first time on Saturday, it will join a long list of famous and infamous events held in the venerable stadium.

Designed by Werner March, whose father, Otto, was the architect of an earlier stadium at the same site, the 120,000-capacity Olympiastadion was finished in 1936 as part of the Nazis’ sweeping propaganda-through-architecture plan.

Hitler was on hand to open the 1936 Olympics there, and the titanic ceremony, captured in Leni Riefenstahl’s lauded and reviled documentary Olympia, featured the first torch relay. The crowd repeatedly gave the Nazi salute, and it was often returned by the athletes, even those from countries like France that would soon be at war with Germany.

The stadium was the site of several events during the 1936 Games, including the soccer final, won by Italy, and the team handball final, played then as an 11-man outdoor event.

But it is most remembered for the exploits of Jesse Owens, who embarrassed Hitler by winning the 100 meters, 200, long jump and 4×100 relay at the expense of the German team.

“German nationalism and the prejudice that seems to go with it revealed themselves somewhat disagreeably,” Arthur J. Daley reported in The New York Times after Owensâs 100-meter win, noting that Hitler did not congratulate any of the black American winners that day but did find time for German hammer throwers.

Despite German theories of racial superiority, Owens, the grandson of slaves, said he was mobbed by friendly fans seeking autographs. A street near the stadium is now known as Jesse-Owens-Allee.

Oddly enough, two teams of amateur American baseball players participated in an exhibition game in the stadium during the Games. About 100,000 people turned up to see it, The New York Times reported, making it at that time the largest crowd to watch a baseball game anywhere. The Times also reported that the game was “warmly, but not too intelligently received.” Given the low stakes and obscurity of the players, it added a cheeky headline: “One Team Wins, 6-5.”

The World Cup has come twice to the Olympiastadion. In 1974, it hosted three preliminary games, all involving Chile.

It played a more prominent role in 2006, hosting six games. Kaka scored in a 1-0 Brazil win over Croatia in the first of four preliminary round games there. Germany delighted the home crowd with a quarterfinal win there over Argentina in a penalty-kick shootout.

The stadium also was the site of the final between France and Italy. Zinedine Zidane and Marco Materazzi of Italy scored quickly to make the game 1-1, but those goals have almost been forgotten given the notorious incident between the two men in extra time. Infuriated by Materazziâs taunts, Zidane charged and head-butted him in the chest, resulting in a red card in the final game of his international career. Italy won the game on penalties a few minutes later.

American football was once a regular visitor to the stadium. The N.F.L. held a preseason game there every year from 1990 to 1994. The Berlin Thunder of N.F.L. Europe made the stadium its home from 2003 to 2007. In 2004, the team went 9-1 and won the World Bowl behind the Jamaican-born former L.S.U. quarterback Rohan Davey, who also won two Super Bowl rings as a backup to Tom Brady with the New England Patriots.

In addition to the big-ticket events, the stadium has been the home of the Bundesliga team Hertha Berlin since 1963, and the German Cup final since 1985. Perhaps the most memorable final came in 2012, when Robert Lewandowski scored a hat trick and Borussia Dortmund walloped Bayern Munich, 5-2, completing the first league-Cup double in its history.

Outside the world of sports, the stadium is the go-to site in Berlin for the kind of rock acts that can pack in 50,000-plus fans. The Rolling Stones, U2, Guns N’ Roses, Michael Jackson and Bruce Springsteen have all rocked the house, as have acts less familiar to Americans. Later this month, the German pop star Helene Fischer and the drummer Udo Lindenberg will perform there.

But the first event after the Champions League leaves town is on June 25, when AC/DC plays the Olympiastadion.

Luis Su’¡rez, Lionel Messi, Neymar, Carlos Tevez, Paul Pogba … and Angus Young have a lot to live up to.

When it comes to ransomware, you don't always get … END_OF_DOCUMENT_TOKEN_TO_BE_REPLACED

Peyton Carr is a financial advisor to founders, … END_OF_DOCUMENT_TOKEN_TO_BE_REPLACED