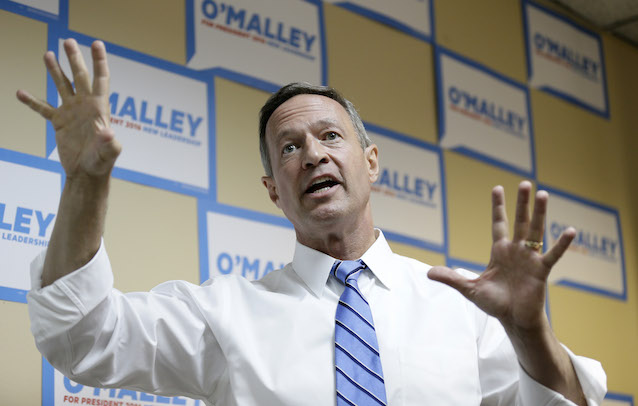 Democratic presidential candidate Martin O’Malley linked climate change to the rise of ISIS earlier this week. Conservatives pounced. Score this round for O’Malley.

For three years now, leading security and climate experts — and Syrians themselves — have made the connection between climate change and the Syrian civil war. Indeed, when a major peer-reviewed study came out on in March making this very case, Retired Navy Rear Admiral David Titley said it identifies “a pretty convincing climate fingerprint” for the Syrian drought.

Titley, a meteorologist who led the U.S. Navy’s Task Force on Climate Change when he was at the Pentagon, also said, “you can draw a very credible climate connection to this disaster we call ISIS right now.”

“One of the things that preceded the failure of the nation-state of Syria and the rise of ISIS was the effect of climate change and the mega-drought that affected that region, wiped out farmers, drove people to cities, created a humanitarian crisis that created the symptoms — or rather, the conditions — of extreme poverty that has led now to the rise of ISIL and this extreme violence.”

Let’s run through the science underpinning what O’Malley, Admiral Titley, and others have said.

We know that the Syrian civil war that helped drive the rise of the terrorist Islamic State of Iraq and Greater Syria (ISIS) was itself spawned in large part by what one expert called perhaps “the worst long-term drought and most severe set of crop failures since agricultural civilizations began in the Fertile Crescent,” from 2006 to 2010.

That drought destroyed the livelihood of 800,000 people according to the U.N. and sent vastly more into poverty. The poor and displaced fled to cities, “where poverty, government mismanagement and other factors created unrest that exploded in spring 2011,” as the study’s news release explains.

The March 2015 study, “Climate change in the Fertile Crescent and implications of the recent Syrian drought,” found that global warming made Syria’s 2006 to 2010 drought two to three times more likely. “While we’re not saying the drought caused the war,” lead author Dr. Colin Kelley explained. “We are saying that it certainly contributed to other factors — agricultural collapse and mass migration among them — that caused the uprising.”

Events leading up to 2011 Syrian uprising, with chart of net migration of displaced Syrians and Iraqi refugees into urban areas (in millions) since 2005. Source: Kelley et al. (2015)

The study identifies “a pretty convincing climate fingerprint” for the Syrian drought, Admiral Titley told Slate at the time. Titley is the former COO of NOAA.

In particular, the study finds that climate change is already drying the region out in two ways: “First, weakening wind patterns that bring rain-laden air from the Mediterranean reduced precipitation during the usual November-to-April wet season. In addition, higher temperatures increased moisture evaporation from soils during the usually hot summers.”

This study and others make clear that for large parts of the not-terribly-stable region around Syria — including Lebanon, Israel, Jordan, and parts of Turkey and Iraq — brutal multi-year droughts are poised to become the norm in the coming decades if we don’t reverse carbon pollution trends ASAP.

Climate models had long predicted that the countries surrounding the Mediterranean would start drying out. In general, climate science says dry areas will get dryer and wet areas wetter.

In 2011, a major NOAA study concluded that “human-caused climate change [is now] a major factor in more frequent Mediterranean droughts.”

Reds and oranges highlight lands around the Mediterranean that experienced significantly drier winters during 1971-2010 than the comparison period of 1902-2010. Via NOAA [Click to enlarge].

“The magnitude and frequency of the drying that has occurred is too great to be explained by natural variability alone,” explained Dr. Martin Hoerling of NOAA’s Earth System Research Laboratory, the lead author of the 2011 study.

The connection between the conflict in Syria and climate change is not new. In March 2012, Climate Progress published a piece by Francesco Femia and Caitlin Werrell, co-founders and directors of the Center for Climate and Security, which made the case for the link between climate change and events in Syria.

In 2013, Tom Friedman went to Syria to learn firsthand about the connection between the drought and the civil war. His New York Times column, “Without Water, Revolution,” explains what he discovered.

Friedman also filmed his visit, where he talked to actual Syrians about the causes of the civil war. It was for the premiere episode in April 2014 of the Emmy-winning Showtime series, “Years of Living Dangerously,” which can be viewed on Netflix right here.

Many other recent studies have been done on this subject, such as “Water, Drought, Climate Change, and Conflict in Syria” by climate and water expert Peter Gleick.

Perhaps the central takeaway from this area of research is that the greatest danger to humanity this century from human-caused climate change is Dust-Bowlification and the threat to our food supplies and hence global security.

That’s because large parts of the most inhabited and arable parts of the planet — including the U.S. breadbasket — face the exact same heating and drying that have already affected the Mediterranean. The 2014 study, “Global warming and 21st century drying,” projected this bleak future:

The bottom line: Homo sapiens is currently on track to make drought and extreme drying the normal condition for the Southwest, Central Plains, the Amazon, southern Europe, the entire region around the Mediterranean, and many other key areas post-2050.

As Femia bluntly told an interviewer in 2013, the time to act is now: “if you let this problem get out of hand you’re going to have a number of situations in the future, whether they’re major disasters or conflicts, that our security forces may have to respond to. It will cost us a lot more in the long term if we do nothing now.”

Returning to O’Malley’s comments, it’s pretty clear that they are quite reasonable and defensible. Personally, because the causes of war and terrorism are so complicated and interconnected, I prefer to say things like “climate change HELPED create conditions for rise of ISIS.” Not that nuanced phrasing will not spare anyone the attacks from the anti-science crowd.

When it comes to ransomware, you don't always get … END_OF_DOCUMENT_TOKEN_TO_BE_REPLACED

Peyton Carr is a financial advisor to founders, … END_OF_DOCUMENT_TOKEN_TO_BE_REPLACED