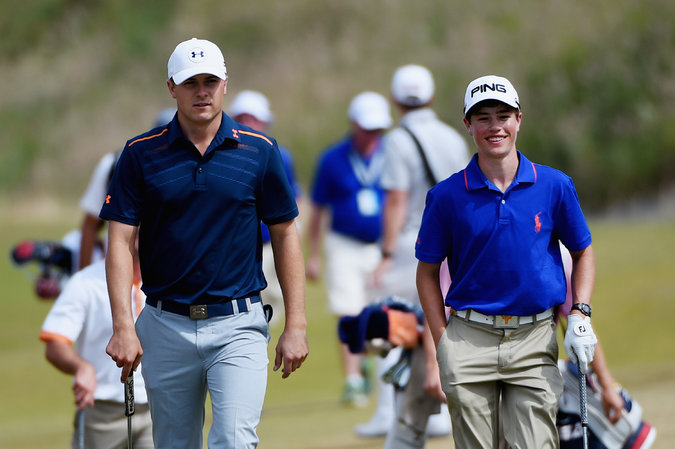 UNIVERSITY PLACE, Wash. – Cole Hammer was being interviewed Monday evening at Chambers Bay when Cody Gribble, a fellow Texan with whom Hammer had just finished a nine-hole practice round, sneaked up from behind, lifted the 125-pound Hammer off his feet in a bearhug, set him down, and started to walk away.

Halfway up the hill, Gribble turned around and said, “Are you done for the day?”

Gribble said he was going to putt for a while.

This week amounts to summer school for the 15-year-old Hammer, the third youngest man to qualify for the United States Open. He is trying to learn as much as he can from watching the pros before returning to the junior golf circuit and his Houston high school, where he will be a sophomore in the fall.

Hammer earned a spot in this weekâs field by finishing second in the 36-hole sectional qualifier in Dallas at Northwood Club, which hosted the 1952 Open. On his first 18, he carded a 64, which was three shots off the course record, and two off the 62s posted there by the major winner Justin Leonard and the six-time Tour winner Hunter Mahan. Hammer followed it with a 68.

“I think it’s amazing that he’s here,” said Jordan Spieth, the reigning Masters champion, who is from Dallas. “He’s had a smile on his face every moment that I’ve seen him.”

Spieth, 21, was another member of Hammer’s group Monday and attracted most of the attention from the fans. On the 18th hole, someone from the stands yelled out, “Hammer!,” and Hammer’s face reddened. From years of watching the pros, he knew what to do. He looked in the man’s direction and doffed his cap.

Hammer is so young, he barely shaves “a little bit, sometimes,” he said sheepishly - and he cannot drive the courtesy car that he received the keys to when he registered for the tournament. He has his learning permit and is looking forward to obtaining his license after he turns 16 in August.

“I kind of want to get it so I can take myself places,” Hammer said. “Go to the golf course when I want to and stuff like that.”

Hammer’s father, Gregg, was carrying his bag Monday and will be his caddie when the tournament starts Thursday. Both of Hammer’s parents have won club championships at River Oaks, and Hammer, who followed them into the game when he was a toddler, has caddied for them.

Was there any doubt his father would be riding shotgun for Hammer’s United States Open debut?

“Not if he wanted to eat,” the elder Hammer said with a laugh. “No, I’m kidding. It was totally up to him. I struggled with it a little bit because I didn’t want to do him a disservice by being his caddie without knowing anything about the course.”

After playing 54 practice holes, both Hammers feel more at ease in their surroundings.

“This has been an amazing experience for both of us so far,” Gregg Hammer said. His son, he added, “seems to be handling everything O.K. He’s certainly in awe of what he’s seeing because he’s watched golf since he was a kid on TV and seen all the players he’s next to on the range.”

The kids these days are growing up fast in golf. The top two spots in the world rankings are occupied by Rory McIlroy, 26, and Spieth.

“He’s so good,” Hammer said of Spieth. “Definitely one of my role models.”

Hammer had hoped to one day play against McIlroy and Spieth. He never expected that day to come this week. On Monday he was practicing next to Spieth on the range; he glanced up and there was McIlroy hitting balls.

“He hits it so far it’s crazy,” Hammer said during a Tuesday morning news conference that began with him turning to the moderator and whispering, “Do I just sit here and talk?”

Hammer said he entered qualifying as a lark.

“I just thought it would be cool to try, to see where it would take me,” he said, adding, “Just looking for a good experience to see how my game compared to others.”

Spieth said he was excited to see how Hammer plays this week.

“He’s getting better experience than I had at his age,” Spieth said. He added, “It’s cool that these young junior golfers are looking to us young guys on Tour and working their tails off to get here.”

When it comes to ransomware, you don't always get … END_OF_DOCUMENT_TOKEN_TO_BE_REPLACED

Peyton Carr is a financial advisor to founders, … END_OF_DOCUMENT_TOKEN_TO_BE_REPLACED