You are here: Home / World / Congress Urged to Help Fight Cancer With 20,000 Lighted Bags of Hope 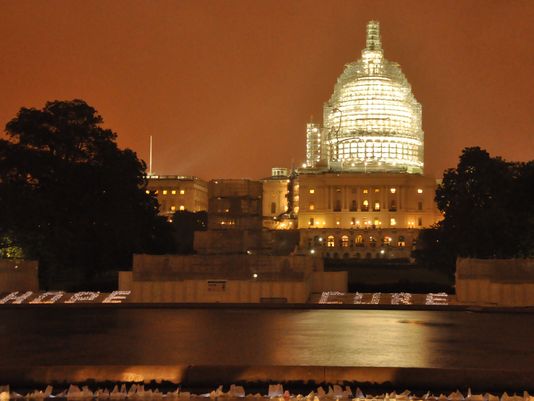 Twenty thousand glowing bags light up the nation’s Capitol in memory of those who have battled cancer and urge Congress to prioritize the fight against the disease that kills many each year.

Volunteers and advocates from American Cancer Society Cancer Action Network, a non-profit organization in advocacy of eliminating cancer, placed 20,000 lights in decorated bags around the Lincoln Memorial Reflecting Pool, spelling the words “HOPE” and “CURE.” The bags include handwritten messages to the beloved who once had cancer. Despite the rain, these bags still shine brightly in this “Lights of Hope” ceremony.

“It’s a very emotional sight because we are spending a lot of time tonight, remembering people and honoring people who have either lost their fight or struggling or conquered this disease,” said Molly Daniels, chief advocacy officer of ACS CAN.

Actress and Stand Up To Cancer Ambassador Marcia Cross and former national football player Chris Draft joined the 750 cancer patients and survivors to call on Congress to help fight cancer. Both Cross and Draft have cared for spouses who battled cancer.

“It’s going to be a rough night,” Cross said. ” When you look around and you see so much loss and so many people suffering, it’s … it’s suffering.”

“Football really prepared me for her diagnosis. You really have to deal with it and find the positive in those moments, Draft said.” That’s what we have to do in terms of cancer, really look at it, face it.”

Lights of Hope began in 2011 at the National Leadership Summit and Lobby Day to celebrate ACS CAN’s 10th anniversary. It has been an annual event since then, and the number of bags grows each year.

“There is a light at the end of the tunnel. That’s because people who have lost their loved ones contribute to the fight,” Cross said.

When it comes to ransomware, you don't always get … END_OF_DOCUMENT_TOKEN_TO_BE_REPLACED

Peyton Carr is a financial advisor to founders, … END_OF_DOCUMENT_TOKEN_TO_BE_REPLACED