You are here: Home / Science / Could This Be The ESA’s Missing Comet Lander? 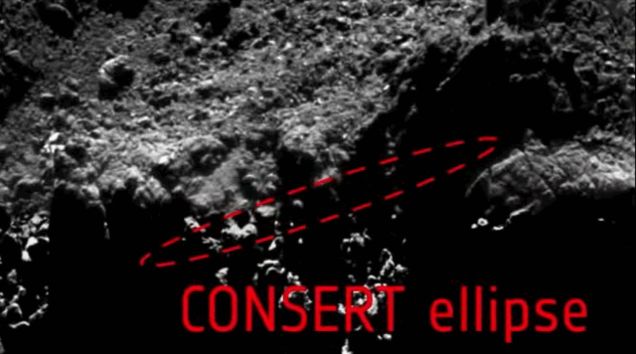 After months of searching, the European Space Agency says it may have finally caught a glimpse of the missing Philae Lander on the surface of Comet 67P/Churyumov-Gerasimenko. During its historic descent back in November 2014, the lander’s harpoons failed to properly deploy and its ice screws were not enough to secure it at its intended landing site, an area known as Agilkia.

After a tremendous bounce that resulted in an additional two-hour flight, the lander finally came to rest in an area called Abydos. The probe managed to snap its now iconic final image, but soon expired due to its inability to draw any energy from the sun.

In the weeks and months following, the ESA’s OSIRIS team been tirelessly searching for the lander by analyzing images and performing simulations to determine where it might be. After ruling out four out of five possible landing sites, the ESA now says it may have finally located the missing lander, though it cannot be confirmed.

A key component to the possible discovery was in narrowing down the lander’s final location. The ESA scientists did this as part of the CONSERT experiment soon after touchdown. By analyzing radio signals sent between the lander and Rosetta (its mother spacecraft) they were able to establish the landing site to within an ellipse roughly 52 x 525 feet (16 x 160 meters) in size, just outside the rim of the Hatmehit depression.

“We have identified several possible lander candidates in OSIRIS images, both inside the CONSERT region of interest and nearby,” noted Holger Sierks, OSIRIS principal investigator at the Max Planck Institute for Solar System Research (MPS) in Germany, in a statement.

Four of the five spots are well away from the ellipse, but two images in particular grabbed the attention of the OSIRIS team. Photos captured on December 12 and 13 from a distance of 12.4 miles (20 km) appears to show something just a few meters outside the CONSERT ellipse.

Importantly, the objects were not seen in images taken two months prior. The ESA says that most of the spots are likely surface features of the comet, but one of them could very well be the lander.

“Although the pre- and post-landing images were taken at different spatial resolutions, local topographic details match well, except for one bright spot present on post-landing images, which we suggest is a good candidate for the lander,” noted OSIRIS team member Philippe Lamy, adding: “This bright spot is visible on two different images taken in December 2014, clearly indicating that it is a real feature on the surface of the comet, not a detector artifact or moving foreground dust speck.”

So is this the lander? The ESA says it’s still not entirely sure:

On one hand, analyses carried out at the Philae Science Operations and Navigation Center (SONC) at CNES suggest that this candidate satisfies a number of constraints regarding, for example, illumination and radio visibility in this region.

On the other, the candidate is located just outside the ellipse currently identified by CONSERT, although as mentioned earlier, improved shape models and continued CONSERT data analysis may alter its position.

Also, given the relatively long seven week interval between the ‘before’ and ‘after’ images, it is possible that this object is due to a physical change at that location on the nucleus, perhaps as fresher material was newly exposed. The relative lack of significant illumination in this region at the time argues that such changes are unlikely, but they cannot be completely ruled out.

The ESA adds that the chances of finding the lander could be heightened if Philae collects enough solar energy to wake up and transmit a signal.

Source: io9 Could This Be The ESA’s Missing Comet Lander?

When it comes to ransomware, you don't always get … END_OF_DOCUMENT_TOKEN_TO_BE_REPLACED

Peyton Carr is a financial advisor to founders, … END_OF_DOCUMENT_TOKEN_TO_BE_REPLACED