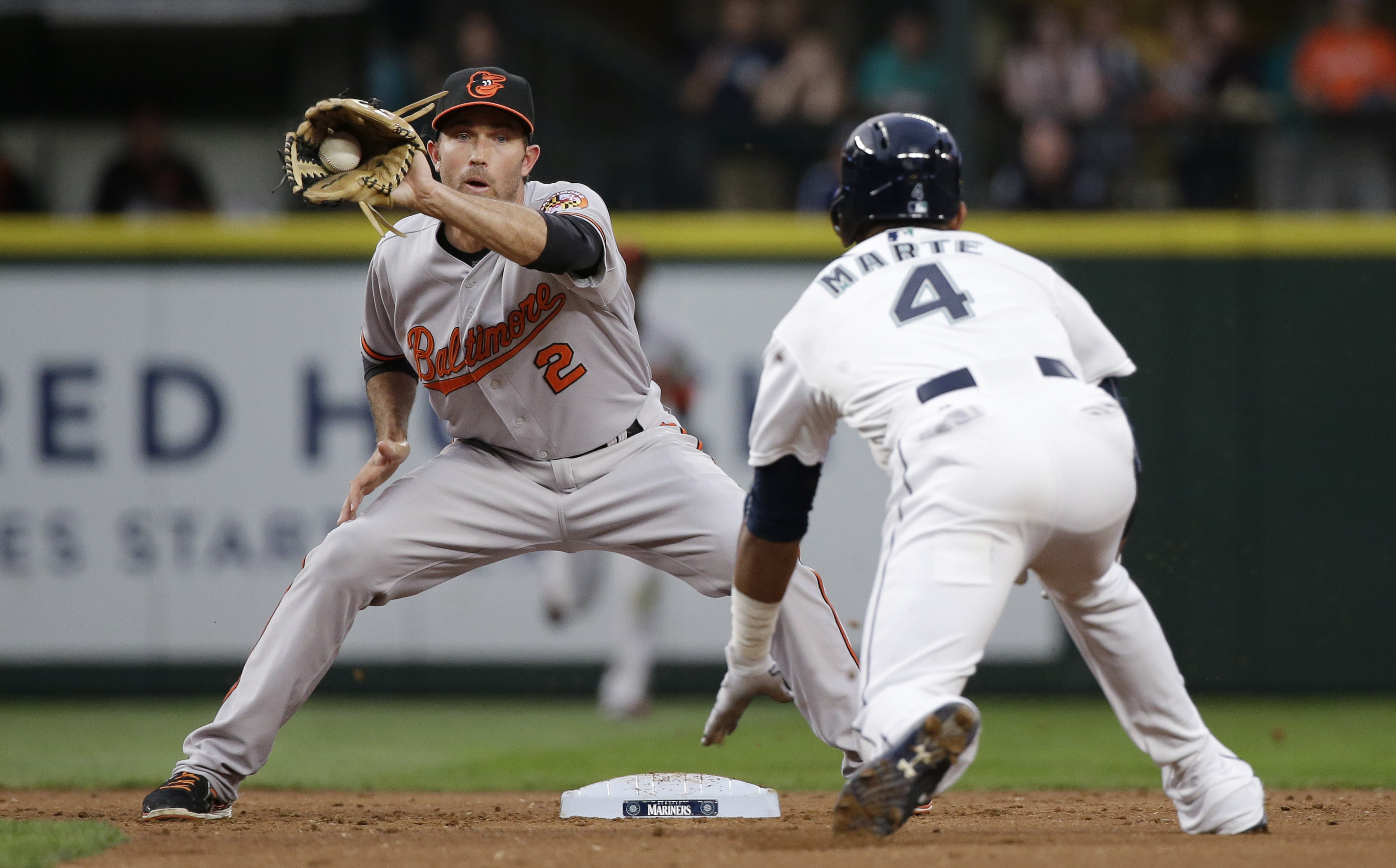 Nelson Cruz extended his hitting streak to a career-best 20 games, but couldn’t match the power of Adam Jones and Chris Davis. Jones homered in the first inning off Seattle starter Vidal Nuno, Davis added his 30th home run in the sixth inning and the Baltimore Orioles beat the Mariners 3-2 on Monday night.

“Tonight was one of the few games where they beat us,” Seattle manager Lloyd McClendon said. “We played an extremely good game, they played a good game and they beat us. Those games happen.”

But aside from Cruz extending his streak and Franklin Gutierrez’s solo home run, there was very little punch from the Mariners against Baltimore lefty Wei-Yin Chen.

“He’s had our number this year,” McClendon said.

Chen (6-6) won for the second time since July 1, pitching into the eighth inning as the Orioles inched within two games of the Los Angeles Angels in the race for the second wild card in the American League.

Chen allowed only Gutierrez’s home run leading off the second that barely eluded the leap of Junior Lake in left field. It was Gutierrez’s fifth homer of the season, but all Seattle could do against Chen.

The lefty gave up just three hits. He struck out five and retired 13 of his final 14 batters.

Mark Trumbo walked on a 3-2 pitch with one out in the eighth, Chen’s last hitter. Kyle Seager, who doubled in the first inning, was the only batter other than Gutierrez to reach second base against Chen.

“He got stronger as the game went on, the late life was there and the depth on his breaking ball,” Baltimore manager Buck Showalter said. “When you give a good catcher those things to work with, it’s going to work.”

Jones launched his 18th homer in the first inning off Nuno (0-1) and scored on Davis’ base hit in the fourth. Davis then hit a line drive out to center field off reliever Mayckol Guaipe in the sixth that landed in nearly the same spot as Jones’ shot.

“The middle of their lineup is just red hot right now. It was two mistakes that hurt me a little bit,” Nuno said. “The bottom line is I attacked the zone and that’s how I kept us in the ballgame.”

Zach Britton got five outs for his 24th straight save, but it wasn’t simple. He gave up a two-out double to Gutierrez in the ninth and, after a wild pitch, Gutierrez scored when catcher Caleb Joseph missed Austin Jackson’s swinging third strike. Jackson was safe at first, but Britton rebounded and fanned Jesus Montero for the final out.

It was the fifth time this season Britton went more than one inning for a save.

Orioles: Right-handed reliever Chaz Roe was placed on the 15-day disabled list with tendinitis in his shoulder. Roe pitched Sunday but flew back to Baltimore to be examined by team physicians.

Mariners: Left-handed reliever Charlie Furbush threw a 40-pitch bullpen session as he continues to recover from a biceps strain. Barring a setback, Furbush should go out on a rehab assignment in the next few days.

Orioles: One-time Seattle prospect Chris Tillman (8-7) looks to win his seventh straight decision. Tillman last lost on May 31. Since then he is 6-0 with four no-decisions.

Mariners: Taijuan Walker (8-7) goes for his ninth win after Seattle’s bullpen failed to hold a 5-3 eighth-inning lead in his last start. McClendon said he’s starting to get worried about the number of innings Walker is projected to throw this season.

When it comes to ransomware, you don't always get … END_OF_DOCUMENT_TOKEN_TO_BE_REPLACED

Peyton Carr is a financial advisor to founders, … END_OF_DOCUMENT_TOKEN_TO_BE_REPLACED