You are here: Home / Technology / Don’t Hit MIT’s Hermes Robot, He Can Hit Back 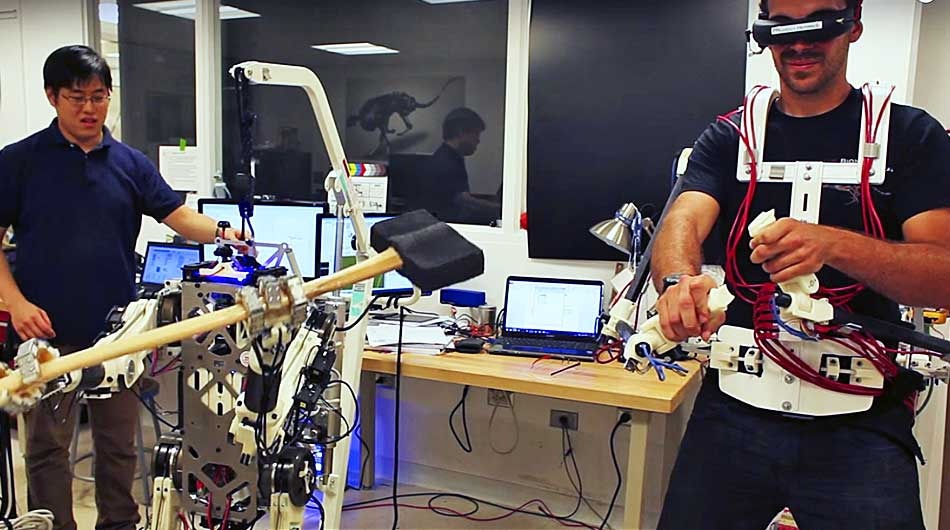 We’ve seen films depicting human-controlled robots with lightning reflexes, mimicking its human puppet master, but the reality of such constructs has been less than viable, until now. The Hermes robot is shown in a video released on Friday responding to the real-time physical input from a human controller.

In the demonstration, the robot shows it can be imbued with faster reflexes for emergency response situations.

“[W]e decided that connecting the robot to a human operator was the easiest way to incorporate the kind of intelligence we need,” said Albert Wang, a project team member at MIT’s Department of Mechanical Engineering, on MIT’s site. “It would take a computer a long time and a lot of programming to come to the quick conclusions that humans come to almost instantaneously through good instincts.”

In the video, we see the Hermes robot, powered by lightweight electric motors and custom actuators, doing everything from punching through a wall of sheet rock to wielding an axe — two actions that could help save a human life during a fire emergency.

The real-time force feedback dynamic is demoed in the video (top of page) and the sensations felt by the human operator appear to be instantaneous and comparable to the force experienced by the robot.

But aside from the emergency rescue applications, the robot-to-human set-up just looks incredible, and brings us one step closer to the Mobile Suit Gundam dream we’ve seen in anime for so many years.

The team says that in a future version of Hermes they hope to give it the ability to have more autonomous functionality.

When it comes to ransomware, you don't always get … END_OF_DOCUMENT_TOKEN_TO_BE_REPLACED

Peyton Carr is a financial advisor to founders, … END_OF_DOCUMENT_TOKEN_TO_BE_REPLACED