You are here: Home / Lifestyle / ELEVATE: Greener, Leaner Houses and Businesses on a Stick 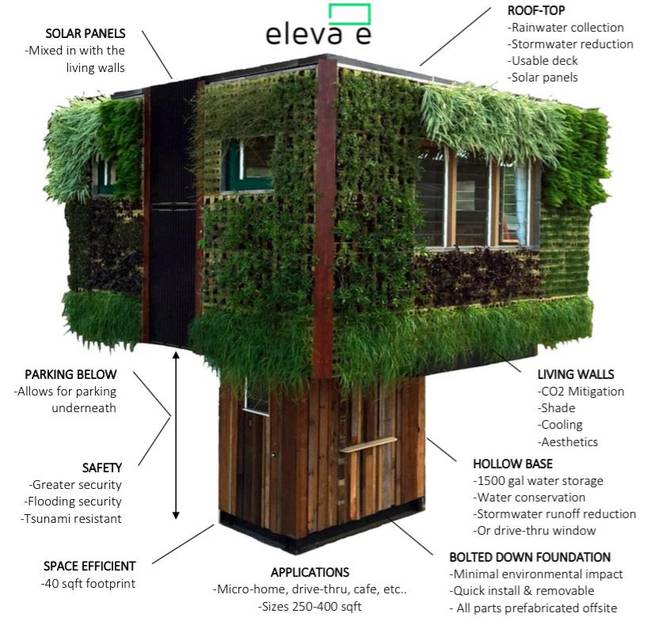 We have a lot of problems to solve in this world. The Toothman Foundation in Hawaii lists some of them as insufficient water availability, poor air and water quality, and high energy consumption that are exacerbated by the increasing population density and demands of urban environments.

Metropolises all over the world face the challenge of continual growth. The most pressing problems facing cities in the world are: scarcity of space for new development and environmental degradation.

So the foundation has a mission:

Our mission is to bring to the world the most innovative, practical spaces, that address global environmental concerns, while helping ELEVATE people’s lives.

And the Foundation offers a house-on-a-stick solution. Now don’t get me wrong, it’s a very nice tiny house on a stick, with a lot of nice features. There are a lot of advantages to being built on stilts like this: the air up there is cooler and there are fewer crawly things; It frees the ground plane for storage of cars and provides shade; it’s useful in floods.

There is a lot to be said for the lovely green living walls too; they keep the place cool and help purify the air. They eat CO2. They can be watered by captured rainwater from the roof. It looks terrific.

But there are also problems when you put a box on a stick, that founders Nathan and Tiffany Toothman, both Bachelors of Science in Civil Engineering can probably explain better than an architect like me. When you put a 400 square foot box on a 40 square foot stick, you have to design the foundation really well to keep it from falling over, particularly in the wind. It has to go deeper and have a lot more material. It also takes a lot more structure to cantilever the box out over the stick than a conventional building would need.

Then there is the Americans with Disabilities Act, which requires that just about any space used by the public be universally accessible. This would eliminate about 90% of the uses listed on the applications page. And yes, I know that you can put an elevator in the stick, but elevators are expensive and need a lot of electricity.

Finally, and most importantly, how does this save the world? On Prefundia they write:

Elevate is bringing the world innovative and practical spaces. Our structures allow optimal space utilization, while addressing pressing global issues: depletion of water, need for renewable energy, and excess CO2 emission. The simplicity of the design allows for limitless ways it can be used from residential, commercial to governmental.

OK, green walls, solar panels and rainwater collection are useful and lovely. But how does it deal with the problems of population density and “scarcity of space for new development and environmental degradation.”? It still essentially has the same footprint as if it was sitting on the ground. It can’t be the tiny house size; In most of the world outside of the USA people already live in tiny houses between 250 and 400 square feet, neatly stacked on top of each other and called apartments or flats. It’s a more efficient way of dealing with density.

The Toothman Foundation is launching a Kickstarter campaign shortly to raise money for this project. Perhaps we will understand better when it launches on the 12th to see the full picture. Because there has to be more than this. This would be a lovely little project if they weren’t promising the earth. More at Toothman Foundation’s Elevate Structures site.

When it comes to ransomware, you don't always get … END_OF_DOCUMENT_TOKEN_TO_BE_REPLACED

Peyton Carr is a financial advisor to founders, … END_OF_DOCUMENT_TOKEN_TO_BE_REPLACED