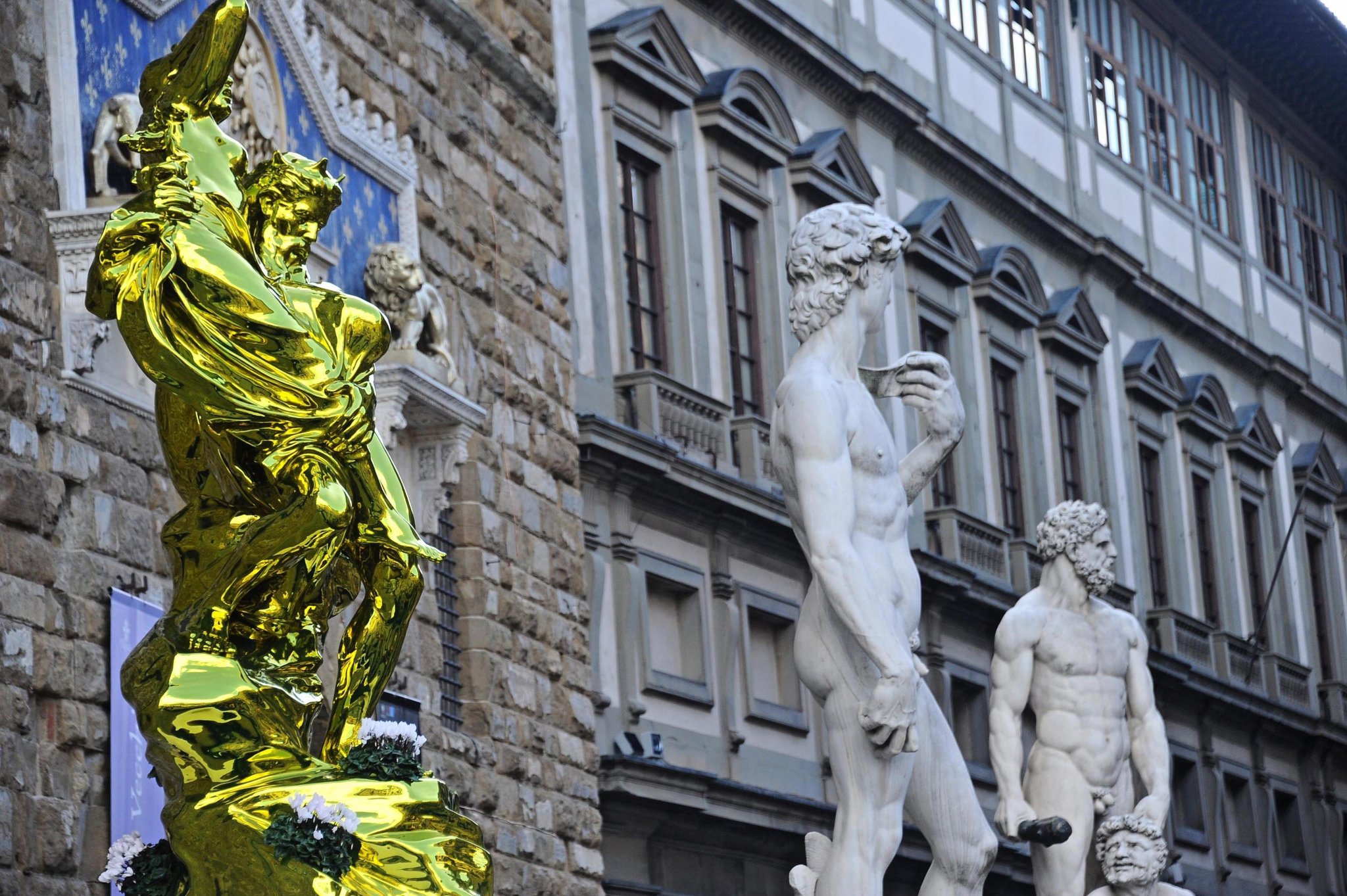 You could be forgiven for thinking Michelangelo’s David has turned his shapely back and is looking away. The presence of Jeff Koons’s monumental gilded steel sculpture Pluto and Proserpina, standing between copies of masterpieces by Donatello and Michelangelo outside Florence’s medieval town hall, is certainly a shock to the eyes.

But this is exactly what the old master paintings dealer Fabrizio Moretti had in mind when he invited Mr. Koons to show two sculptures at the Palazzo Vecchio and to cut the opening ribbon at the 29th edition of the Biennale Internazionale dell’Antiquariato di Firenze at the nearby Palazzo Corsini. Both events opened to the public on Sept. 26.

“I wanted to combine old masters and contemporary,” Mr. Moretti, the new chairman of BIAF said in a telephone interview. “Florence is the city of the Renaissance, but it needed new input, and he is an old master painting and sculpture collector.”

High-end fairs specializing in old masters and antiques, such as BIAF, TEFAF Maastricht and the Biennale des Antiquaires in Paris, have struggled to retain and attract buyers in recent years. Mr. Moretti and BIAF’s 88 participating dealerships were hoping that Jeff Koons in Florence — a three-month showing of those two sculptures, conceived by the city’s mayor, Dario Nardella, and curated by Sergio Risaliti — would broaden international interest in Italy’s oldest and most prestigious fair devoted to its own historic art.

Pluto and Proserpina, a work from Mr. Koons’s Antiquity series, is the first monumental sculpture to be placed in front of the Palazzo Vecchio in almost five centuries. Dating from 2010-13, the three-meter-high work updates Bernini’s celebrated baroque marble The Rape of Proserpine in glaring mirror-polished steel with live flowers sprouting here and there. Inside the palace, in the Room of the Lilies, Mr. Koons’s 2013 synthetic marble male nude, Gazing Ball (Barberini Faun), inspired by an ancient Roman statue, reclines with a mirror ball on his knee in front of Donatello’s ferocious 15th-century bronze of Judith chopping off the head of Holofernes.

Both Koons works, each from editions of three plus one artist’s proof, are loans from private collections arranged by the New York gallery David Zwirner, which wouldn’t divulge prices for these works. Two dealers with knowledge of the matter, however, said the current gallery prices for Koons works like Pluto and Proserpina were about $8 million and sculptures from the Gazing Ball series cost $3 million apiece.

“All of a sudden I had this opportunity to have a dialogue with artists like Michelangelo and Donatello, who are also referencing classical art,” Mr. Koons, 60, said in an interview in the Palazzo Vecchio the day before his exhibition and the BIAF fair opened. He added: “I really feel I’m having a dialogue with the areas that interest me most.”

And what are these areas?

“Bringing polarities together. Of harmony,” he said. “If you think of my equilibrium pieces, it’s really like a classical Greek ideal of all pressures being equal, a sense of entropy, of all these forces coming together.” (Mr. Koons came to prominence in the 1980s with his sculptures of basketballs floating in “equilibrium tanks” filled with distilled water.)

The artist’s public persona is a disarmingly persuasive blend of evangelical minister and life-insurance salesman. The conceptual inscrutability of what he says about his art seems almost knowingly unrelated to the provocative nature of the art itself. Yet Mr. Koons also articulates a thoughtful fascination with history, which has become a rarity in today’s contemporary art world.

“I love this linkage to the past, while being in the moment,” he said. “The way art functions in its connective power is very similar to our genes. Picasso will be referencing El Greco and El Greco will be making another reference. It’s a community. Information is transferred.”

Mr. Koons said he felt this connectivity as a collector. His home on the Upper East Side of Manhattan contains an eclectic group of contemporary, modern and historic pieces by artists like John Currin, Courbet, Magritte and Quentin Massys. Several have an edge of eroticism that characterizes much of his own work. In the interview, the artist cited a 1969 Picasso “Kiss” painting as a particular inspiration, as well as a 17th-century Nicolas Poussin canvas of Jupiter seducing Antiope, bought at Christie’s in 2008 for $959,400, according to the auction price database Artnet.

But wealthy “crossover” buyers like Mr. Koons are few and far between. As the specialist collector-base is aging, and museums are increasingly short of funds, traditional art and antiques fairs have to find ways broaden their international appeal.

Florence’s BIAF displays only Italian art or art that has been significantly influenced by Italy. As such, the fair faces the additional challenges of a moribund domestic economy and a Mussolini-vintage law that deems all artworks created more than 50 years ago, regardless of value, require an export licence to leave the country. Works officially “notified” as national heritage can only be sold to Italians.

At the event, Arnolfo di Cambio’s superb 13th-century marble statue of an apostle, from the original façade of Florence Cathedral, was priced at 2 million euros, about $2.2 million, by the Munich and Turin dealers Mehringer & Benappi. Another work on sale was Luca Giordano’s opulent 1675-80 Neapolitan School painting The Rape of Europa, priced at €1.5 million by the London, Milan and St. Moritz dealers Robilant + Voena. Both prices, significantly below international market values, reflected the “notificato” status of these works.

Dr. Günther, in keeping the Italophile ethos of the fair, showed an outstanding selection of printed books and manuscripts by Dante, Petrarch and Boccaccio, brought to the fair on temporary export licenses for prices as high as €5 million. Equally important, he also brought to Florence two of his wealthiest international clients — one from South America, the other from central Europe. Bruce Springsteen’s manager, Jon Landau, was among the other foreign collectors spotted in BIAF’s predominantly Italian crowd.

“This event is refreshingly old fashioned,” Dr. Günther said in an interview at the Sept. 25 preview, referring to the previous evening’s black-tie dinner for 600 V.I.P. guests (including Mr. Koons), culminating in a spectacular firework display on the Arno river.

Mr. Naumann showed the early 1630s painting The Martyrdom of Saint Bartholomew, made by the Dutch baroque artist Matthias Stomer while working in Rome. Bought in grimy original condition for $845,000 at Christie’s New York in January, it has been cleaned and was priced at $1.75 million.

The Stomer was another of several museum-quality works temporarily imported into Italy for the fair, so free to be bought by international collectors.

Arguably the most spectacular of them all was the neoclassical marble sculpture, The Genius of the Arts Unveiling Nature, made by the Austrian artist Leopold Kiesling in Rome in 1808-1809 while working under the influence of Canova. Consisting of an idealized male nude revealing an archaic bronze-inset figure of Diana of Ephesus, this superbly carved allegory, from a Swiss collection, was one of the most important neoclassical sculptures to come on the market in recent years. It was offered by the Rome dealers Galleria Carlo Virgilio with a price tag of €1.8 million — about a quarter of the price of Mr. Koons’s Pluto and Proserpina.

At the time of writing, around the mid-point of the fair, the Kiesling, like so many of the big-ticket items there, was attracting interest, but had yet to find a confirmed buyer.

Admittedly, major sales at traditional events like BIAF do tend to take some time. But the fact remains that for all the publicity generated by Mr. Koons’s involvement in Florence, the biennale remains, as yet, stubbornly national, and the trade in old master paintings and sculptures stubbornly specialized.

“The problem is that old masters are a niche market,” said Mr. Moretti, the chairman of BIAF. They are “inexpensive compared to contemporary. But an artist like Andy Warhol is an icon.”

Mr. Koons has also produced plenty of works — the French porcelain maker Bernardaud has just created an edition of 2,300 miniature yellow Balloon Dogs, priced at $8,000 each — and he could be said to be an artistic icon.

Unfortunately, the same cannot be said of Matthias Stomer and Leopold Kiesling.

When it comes to ransomware, you don't always get … END_OF_DOCUMENT_TOKEN_TO_BE_REPLACED

Peyton Carr is a financial advisor to founders, … END_OF_DOCUMENT_TOKEN_TO_BE_REPLACED