You are here: Home / Weather / Four Hurricanes Churning in the Oceans with More Dangerous Weather Coming 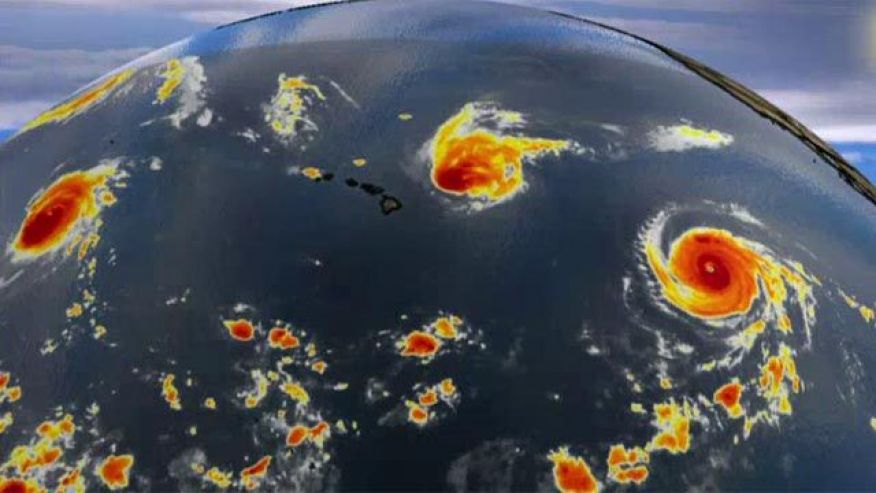 Forecasters are keeping a wary eye on four hurricanes — two of which are Category 4 — feeding off the warm waters of the Pacific and Atlantic oceans. Hurricane triplets Kilo, Ignacio and Jimena have simultaneously formed in the central Pacific.

It’s the first time three hurricanes that held a Category 3 rating or stronger had formed in the central and eastern Pacific basins at the same time, according to the National Hurricane Center.

Ignacio’s path should take it close to Hawaii’s north edge, but forecasters expect the storm to weaken as it approaches land and it should only have an indirect affect, according to Fox News’ weather blog. Ignacio strengthened into a Category 4 on Sunday but was downgraded to a Category 2 on Monday and it could weaken even further to a Category 1 by Tuesday before becoming a tropical storm. Ignacio’s strongest sustained winds were reaching 105 mph winds Monday morning.

Neither Jimena, which remained a Category 4 in the eastern Pacific, or Kilo, far southwest of Hawaii, are expected to threaten land.

But more could be in store for the U.S. via the Atlantic Ocean, as the remnants of Tropical Storm Erika move over Florida, bringing a high probability of heavy rain and flash flood concerns.

Hurricane Fred is the sixth named storm of the Atlantic season, forming at a record easternmost position. The Cape Verde Islands have issued a hurricane watch for the first time in the area’s history. A tropical storm warning is also in effect. A Category 1 storm, Fred’s sustained winds topped out at 85 mph on Monday, according to the U.S. National Hurricane Center in Miami. After it nears the Cape Verde Islands, Fred is expected to track west toward the open Atlantic Ocean.

Fred has already caused flooding and downed trees in Cape Verde as it passes over the archipelago. Officials have closed down all the airports in the country of 10 volcanic islands with a population of 512,000. Rain accumulations were expected to near 10 inches.

The Associated Press contributed to this reporter

When it comes to ransomware, you don't always get … END_OF_DOCUMENT_TOKEN_TO_BE_REPLACED

Peyton Carr is a financial advisor to founders, … END_OF_DOCUMENT_TOKEN_TO_BE_REPLACED