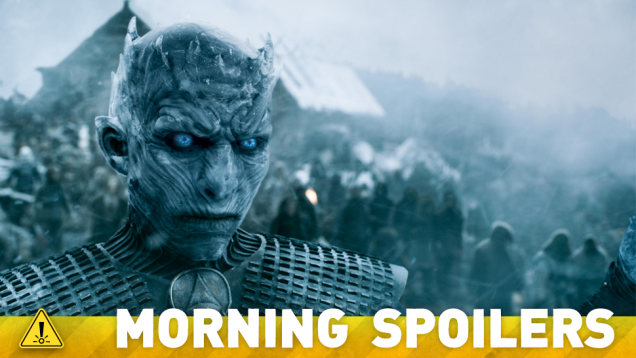 Get a closer look at Jurassic World. AKA Jessica Jones gets a title change. Once Upon A Time is looking to cast some Arthurian legends. Plus, a teeny bit of Game of Thrones, Julie Benz teases Defiance, and Doug Jones want to return to The Flash. Spoilers Now!

Colin Trevorrow talks about referencing Jurassic Park in the movie:

We wanted to do it in a very balanced and measured way. First of all, I know that all of the fans are going to go, and there are certain things they’re going to want to see that are going to make them feel like this has a connection to the films that they loved, and yet the movie has to be for more people than just the fans of “Jurassic Park” (of which there are a great many). I wanted to do it in a way that didn’t invade the experience too much and yet was present. I would say on the set, “Let’s hold Jurassic Park in our hands but not too tight” and that’s the rule we applied. [Coming Soon]

Responding to a fan’s question on LiveJournal about recent developments on the show (mainly concerning the accidental naming of a Targaryen King as “Maegor III”), George R. R. Martin had this to say about the show’s supposed inclusion of the mythical Wight, the Night’s King:

As for the Night’s King (the form I prefer), in the books he is a legendary figure, akin to Lann the Clever and Brandon the Builder, and no more likely to have survived to the present day than they have.

When the leader of the White Walkers was revealed to be called the Night’s King, many people assumed this was the same as the ancient figure of legend — a former Lord Commander of the Night’s Watch who went bad. And maybe, the Night’s King had survived for thousands of years, thanks to the mystical powers of the Others. But Martin seems awfully certain that the Night’s King is long dead — so unless this is another huge difference between the books and the TV series, the name is just a weird coincidence.

The 100
Here’s the extended synopsis for the third season:

For two seasons, the refugees of The 100 sent to Earth have been at war. First with themselves, then with the Grounders, and finally with Mount Weather. Many have lost their lives along the way. All have lost their innocence. They have learned the hard way that in the fight for survival, there are no heroes and no villains. There is only the living and the dead. But now the war is over. The battle against Mount Weather has been won. The prisoners have returned home to a world seemingly at peace, but can they find peace within themselves after what they had to do to escape? And is there more to life than just surviving?

Unfortunately, their newfound sense of normalcy will be short-lived, and their lives will be changed forever, as threats both old and new test their loyalties, push them past their limits, and make them question what it truly means to be human. First, they fought to survive. Then, they fought for their friends. Now, they will fight for the human race…

Once Upon A Time
TV Line has details about casting calls for King Arthur, Merlin and Guinevere, all allegedly going be to series regulars on the show. British actors are being looked at for Arthur and Merlin (who is also specifically referred to as being a role for a black actor), while the casting for Guinevere is focusing on Latin American women.
Rebecca Mader (Zelena) and Sean Maguire (Robin Hood) have both been promoted to series regulars. [EW]

Supergirl
CBS has moved the premiere of the show up to Monday, October 26. [TV Guide]

Arrow/The Flash
Doug Jones (Deathbolt) talks about a possible return in either series:

At the end of The Flash episode, it was episode 1×22, “Rogue Air,” you’ll see me with a bunch of my Rogue friends, and I use “friends” lightly because none of us like each other, but we’re being transported. They wanted to move us from one lockdown area to another, safely, without harm. We got loose. So, Captain Cold, played by Wentworth Miller, gives me a shot in the face during this whole scuffle.The question remains: was I killed or was I just kind of silenced for a minute? I turned toward the camera and there was just had freezer burn across my face. I fell out of frame and that’s the last time you saw me – with my eyes open. Then it was referred to, Liam McIntyre, he asked Wentworth Miller, “Why did you shoot him?” When we were filming, he did a few takes going “Why did you kill him?” So, the fact that they said, “Why did you shoot him?” I don’t want to get caught up in semantics but there might be a possible return!

Season 2 was quite a dark path for Amanda. We see at the beginning of Season 3 that she is out of the darkness. She’s back to being mayor. She’s really fighting to keep the town alive. The E-Rep have buggered off. The mines have shut down, so there is a lack of gulanite in the town. Those who can leave have left. It’s pretty desolate at the start of Season 3, so she’s really struggling to hold everybody together and hold the town together.

Wayward Pines
Ben gets paranoid about his schoolmates in this clip from “The Truth”.

When it comes to ransomware, you don't always get … END_OF_DOCUMENT_TOKEN_TO_BE_REPLACED

Peyton Carr is a financial advisor to founders, … END_OF_DOCUMENT_TOKEN_TO_BE_REPLACED