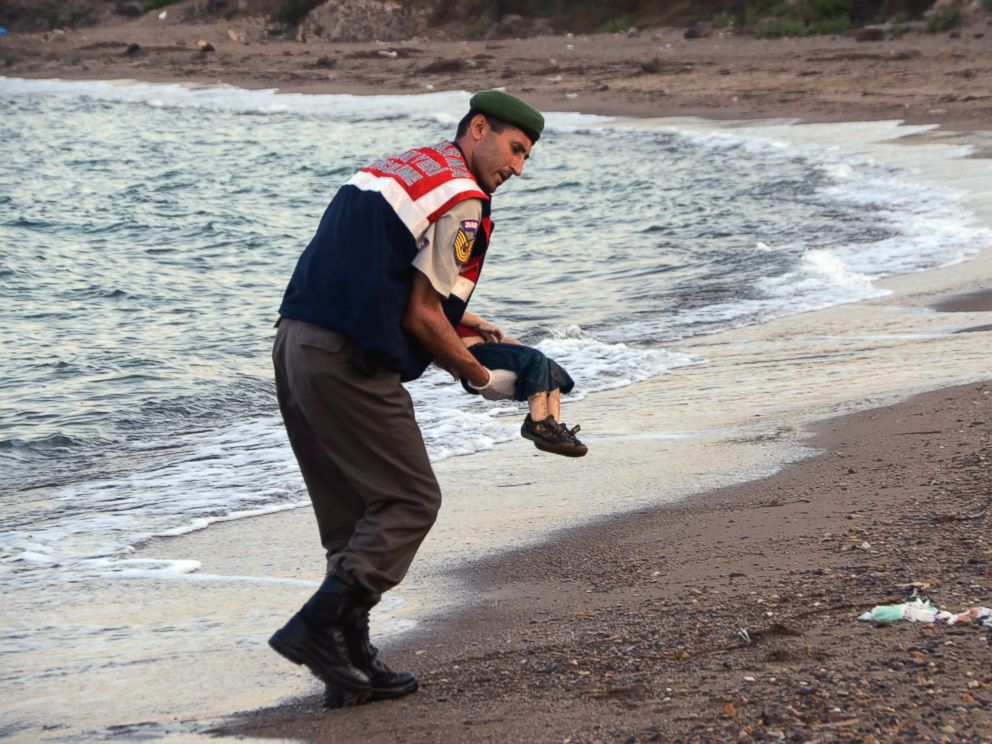 A series of photos of a young boy who drowned on a Turkish beach has prompted outrage over the lack of help refugees are being given in Europe. Local reports state that the 3 year-old boy and his 5 year-old brother died as they were fleeing to Europe after leaving their Syrian hometown of Kobani.

The Associated Press has identified the boy as Aylan Kurdi, and now his name is a trending topic on Twitter.

The photo was used on the front pages of newspapers around the globe, from the Wall Street Journal to the Guardian.

People shared the photos online, including one where he is lying face down in the sand, leading to a debate over whether it was right to share such a graphic image.

Peter Bouckaert, the director of Human Rights Watch, wrote a post about how he thought “long and hard” before deciding to share one of the photos.

Attila Kisbenedek/AFP/Getty Images PHOTO: Migrants board into a local train heading to the Hungarian-Austrian border at the main train station in Budapest, Sept. 3, 2015, after authorities re-opened the station to refugees.

“Some say the picture is too offensive to share online or print in our newspapers. But what I find offensive is that drowned children are washing up on our shorelines, when more could have been done to prevent their deaths,” he wrote.

“It was not an easy decision to share a brutal image of a drowned child. But I care about these children as much as my own. Maybe if Europe’s leaders did too, they would try to stem this ghastly spectacle,” Bouckaert added.

Cartoonists also weighed in by interpreting the scene and sharing drawings where the boy has angel wings or is being lifted up from the water by heavenly beings.

Angelos Tzortzinis/AFP/Getty Images PHOTO: A refugee carries a child as they arrive on the shores of the Greek island Lesbos in an inflatable dingy across the Aegean Sea from from Turkey, Sept. 3, 2015.

Thousands of Syrians have been fleeing the violence in their country and headed to Europe in recent weeks, overwhelming authorities in Hungary, where chaos ensued after the main train station in Budapest was closed because of the crowds.

Many of the migrants were in Budapest on a stop towards their intended destination of Germany.

When it comes to ransomware, you don't always get … END_OF_DOCUMENT_TOKEN_TO_BE_REPLACED

Peyton Carr is a financial advisor to founders, … END_OF_DOCUMENT_TOKEN_TO_BE_REPLACED