You are here: Home / Technology / Home Care Robots Coming to an Elderly Home Near You in Japan 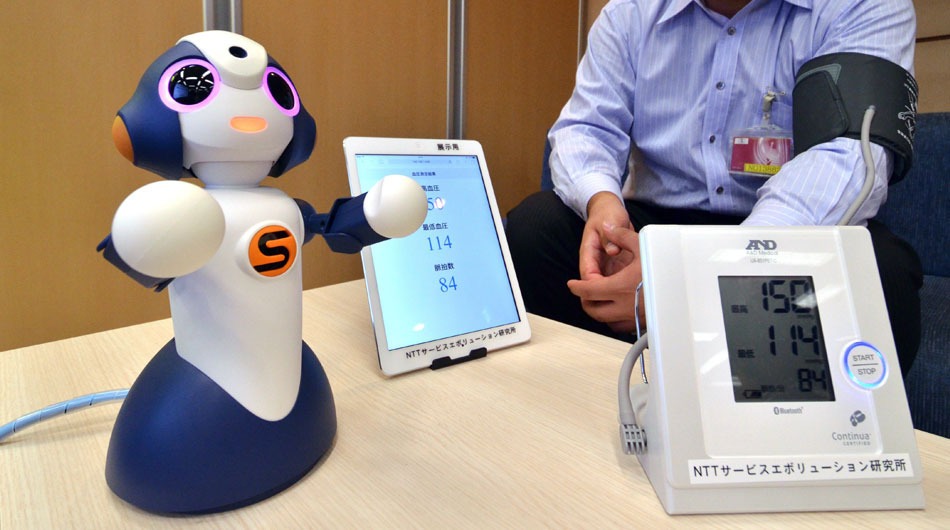 Japan has toyed with the idea of bringing robots into the home to care for its elderly for years, but the idea is finally moving from speculation to reality. NTT, Japan’s largest telecommunications company, will begin placing tiny communication robots in the homes of some older Japanese citizens.

In some ways, NTT’s robot launch seems to be an answer to Softbank’s (a rival Japanese telecom company) Pepper robot, which went on sale in June.

Although not as mobile as Softbank’s Pepper robot, the Sota is cheaper (about $800, plus a monthly service of around $30 for home use) and much smaller (just 11 inches tall), two major advantages considering the fact that many Japanese homes tend to be smaller and have tricky flooring for a rolling robot (e.g. tatami mat flooring).

In addition to its ability to communicate with the user verbally, the robot can also assist the user with health functions by interacting with wearable devices to check a user’s blood pressure and heart rate. The robot is also being touted as an interface for Internet of Things devices, with the ability to turn on smart televisions and dim a home’s lighting on command, for example.

“We hope to offer convenient services so that every household gets [a robot],” Shintaro Watanabe, head of technological development at NTT Data, told the Nikkei.

In a video released back in January, the robot, developed by Osaka-based Vstone, is shown interacting with another robot, the CommU, and a human user.The robots show off their ability to act as an English-Japanese tutor, and even greet the human warmly after she returns home from work. At one point in the video, one robot cries out “charge me, charge me,” as a somewhat disturbing glowing red dot appears on its chest where a human heart would normally be located.

An exact launch date hasn’t been set, but the NTT hopes to begin offering the robot to elderly care facilities in March of 2016.

When it comes to ransomware, you don't always get … END_OF_DOCUMENT_TOKEN_TO_BE_REPLACED

Peyton Carr is a financial advisor to founders, … END_OF_DOCUMENT_TOKEN_TO_BE_REPLACED