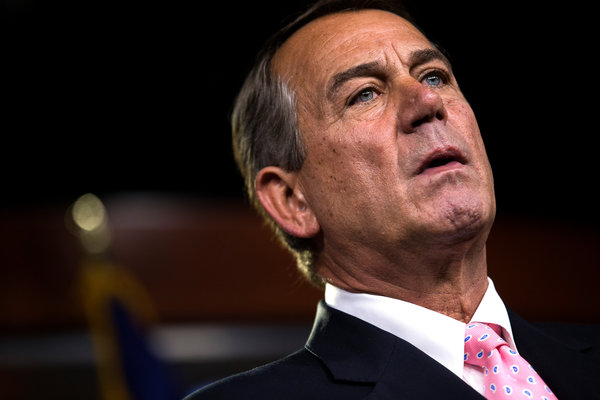 WASHINGTON — Congressional Republican leaders and White House officials on Monday explored ways to resurrect trade legislation that stalled last week when House Democrats objected and dealt President Obama an embarrassing defeat at the hands of his own party.

In meetings at the Capitol and in telephone conversations with Mr. Obama and administration officials, lawmakers ticked through a list of complicated procedural options that could circumvent House Democratic opposition to granting the president the power to expedite trade deals.

As they examined the possibilities, House Republicans took steps Monday night to give Speaker John A. Boehner until the end of July to try again to win approval of a bill to aid workers displaced by global trade agreements, a measure that was tied to the package that would give Mr. Obama so called fast-track authority to advance trade negotiations. The extension could be under vote on Tuesday and showed that the trade fight was far from settled.

Led by Representative Nancy Pelosi of California, the party leader, most House Democrats last Friday opposed the worker aid — something the party has backed for four decades — leaving the fate of the president’s ambitious trade agenda tenuous.

As House Republican leaders tried to settle on a strategy, aides said that Mr. Obama and Mr. Boehner spoke by telephone, though they provided no details. House Democrats had a leadership meeting of their own Monday evening as lawmakers straggled back into town.

The White House press secretary, Josh Earnest, would not say whether the president had reached out to lawmakers in the days since the vote in an effort to get them to change their minds.

“There are senior White House officials who were in touch with members of Congress over the weekend,” he said. “But I don’t have any specific conversations to read out to you.”

Mr. Boehner could schedule a vote to force a second effort on the aid known as trade adjustment assistance. But there were few indications Monday that large numbers of Democrats were ready to reverse themselves, approve the aid and send the trade legislation to the president’s desk.

Another option would be for Republicans to try to persuade members of their own party, most of whom traditionally oppose such worker assistance, to vote for it in the interests of reaching their larger trade goal. But that would require about 90 Republicans switching sides, an unlikely development, and leadership aides were skeptical of that approach.

Republicans were also exploring whether it would be possible to advance the expedited trade authority that narrowly cleared the House on its own and try to push that through the Senate, where it was likely to meet Democratic resistance. White House officials said that Denis R. McDonough, the chief of staff, had consulted with Senator Mitch McConnell, Republican of Kentucky and the majority leader, in the aftermath of the trade vote.

Should Republicans and the administration move in the direction of fast-track trade-negotiating authority without the worker assistance, it would be a significant blow to House Democrats.

The struggle for a resolution showed how much the Democratic move in the House had thrown off the trade agenda even as House Democrats threatened the worker-assistance program due to expire later this year.

Representative Gerald E. Connolly, Democrat of Virginia, a proponent of the trade package, compared the actions of his fellow Democrats who voted against the trade-adjustment bill to the scene in the cult classic “Blazing Saddles,” when the sheriff, finding himself surrounded by angry townspeople, takes himself hostage, pointing his own revolver at his head and telling them to “Hold it,” or he would shoot himself.

“This was supposed to be the piece that we, as Democrats, cared the most about,” Mr. Connolly said of worker-assistance provisions. “But unless somebody can change the dynamic — Democrats get something new, or Republicans decide to hold their noses and vote for it — it’s not going to happen.”

When it comes to ransomware, you don't always get … END_OF_DOCUMENT_TOKEN_TO_BE_REPLACED

Peyton Carr is a financial advisor to founders, … END_OF_DOCUMENT_TOKEN_TO_BE_REPLACED