You are here: Home / World / Inside Calais’s Deadly Migrant Crisis 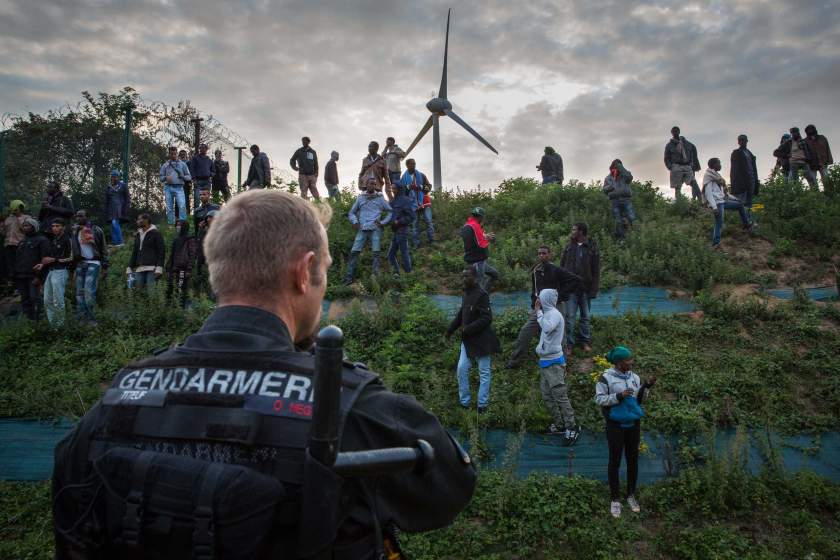 It was late on Thursday night in the French port city of Calais when the mood shifted. In a field awash with silvery moonlight, some 50 illegal migrants—mainly Syrians—sat down and turned their backs on the 20 French policemen who had formed a barricade across the field to prevent them from returning towards the entrance of the railway terminal linking England and France.

There had been scuffles earlier that night when groups of migrants had faced off against the local gendarmerie as they tried to get near to the fencing surrounding the tunnel. But this was something different: a peaceful demonstration against the riot police that had been dispatched to this city to bolster security.

“Let us cross,” a voice in the crowd cried. “We are Syrians. We have a war in our country. Why all of this police just for us? We are just trying to cross for a safe place.”

The voice belonged to a 27-year old man who gave his name only as Adam. He had arrived in Calais four months ago, fleeing the sectarian conflict raging in his hometown of Idlib in northern Syria, part of a civil war that has caused some 4 million Syrians to escape their country. His pleas went unheard – the police continued to usher the migrants away from the railway complex – but Adam gave voice to the anguish felt by the growing number of migrants attempting to cross into the U.K. every night from France, men and women who have traveled thousands of miles in search of safety and prosperity.

2015 has been the year of the migrant in Europe, which has struggled to absorb the 137,000 asylum-seekers who have arrived on its shores in the first half of 2015 alone—an 83% increase from the same period last year. So far that impact has largely been borne by the countries of southern Europe, whose proximity to the Middle East and Africa has made them de facto destinations for migrants attempting to cross into the Mediterranean.

But though Calais’s 3,000 migrants may represent only a fraction of those seeking asylum in Europe, the city – already struggling with an unemployment rate of 13%, well above the national average – says it can no longer cope with the additional economic and security challenges of hosting so many migrants. A sharp surge in violence in the French port has now brought the crisis into the very heart of the continent.

In Calais, the dream of a better future literally shimmers on the horizon. The strait between England and the European continent is at its narrowest here, and on a clear day the white cliffs of Dover can be seen just 21 miles away. For those like Adam, who have left behind everything and traveled thousands of miles to flee conflict and persecution back home, that last distance seems like nothing. Indeed, migrants have been trying to cross into the U.K. from Calais ever since the Kosovo War in the late 1990s. Many speak English or have relatives in the U.K., where they believe jobs are more plentiful than in continental Europe. In the past, migrants often tried to leave by stowing away in lorries that crossed the sea by ferry. With increased security around the port, the focus has shifted recently to the undersea Channel Tunnel, where migrants try to hide on international freight trains and Eurotunnel Shuttles carrying vehicles.

These days, those living in ‘The Jungle’, as the squalid encampments on the edge of Calais are known, come from conflicts that rage beyond Europe’s borders. With the world witnessing the worst refugee crisis since the end of the Second World War, these makeshift camps are a snapshot of a global phenomenon, housing large numbers of Syrians, Sudanese, Eritreans and Afghans who have been forcibly displaced by violence back home.

As the number of migrants has grown, the final leg of the journey to the U.K. has become increasingly perilous. British border controls were effectively moved to Calais as part of deals in 1994 and 2003 with France that meant immigration checkpoints take place before departure (by train or ferry) rather than upon disembarkation. As Cameron noted Thursday, the agreement means Britain’s natural sea border is strengthened by having border controls on the French side – though now senior French politicians are questioning the effectiveness of such a system, which they say places too much of a burden on France.

Years after those deals were made, Calais has come to resemble a fortress, with towering chain-link fences and coils of barbed wire running for miles around the port and Eurotunnel complex.

Ruben Andersson, a migration expert at the London School of Economics, says the increased fortification of land borders in Calais is a “disproportionate” response that fails to acknowledge the negative effects of similar policies at borders in other parts of the world—and which has failed to stop the migrants. “What we’ve seen in Calais over many years is that the more you fortify a border, all you do is displace routes across relatively safe borders to much riskier crossings,” he says.

As the British and French authorities crack down on the more direct routes to reach England, migrants in Calais are trying more dangerous methods. Over the past six weeks, at least nine people have died in attempts to reach England, falling from trains as they tried to hang on, killed by lorries on the motorway, and even drowning in a canal at the tunnel entrance. That compares to a total of 15 migrant deaths for all of 2014.

More than 39,000 attempts to cross the Channel illegally were prevented in 2014 to 2015 – more than double the previous year. British Home Secretary Theresa May said that between June 21 and July 11, the French and British authorities successfully blocked over 8,000 attempts by illegal migrants to enter ports in France. Eurotunnel, the company that runs the shuttles through the Channel Tunnel, said that since January it had prevented 37,000 attempts, describing “nightly incursions” of hundreds of migrants trying to storm security forces at once, in the hope that a lucky few will make it to the other side.

On the night of July 28 alone, a few hundred migrants made over 2,000 attempts to breach the entrance of the Channel Tunnel, the railway line that links France and England. One young Sudanese man died, most likely crushed by a truck exiting one of the shuttles.

Later that week, Prime Minister David Cameron promised that Britain would not become a “safe haven” for illegal immigrants, pledging more fencing and sniffer dogs to crack down on illegal border crossings. Accused of being lax by British politicians, France quickly dispatched 150 extra riot police to Calais. As dusk fell on July 30, the police began patrolling the 14-mile perimeter of the Eurotunnel complex, blocking roads previously open to the public.

But the residents of ‘The Jungle’ were unfazed. That evening a steady parade of more than a hundred people could be seen walking across the city’s bridges and fields, silhouetted against the sunset as they headed towards the railway terminal. They told hopeful stories of friends and family who had reached England. Rumors floated in the crowd that in one night recently, as many as 60 migrants had made it to Dover in the U.K. (The British government has acknowledged that some successfully make it across to the U.K., but has declined to confirm exact numbers.) The real possibility of death did little to discourage migrants who had already faced worse.

“Back home, you could wake up in the morning and go to work and die. You could die every day, any day,” says Tahir Dlil, a 26-year-old radiology graduate who fled the turmoil in Sudan a year ago and has been in Calais for more than four months. “Would we have come if there was peace? Why would we want to live like animals in the jungle? No. We just want to live, to work, that’s all.”

While some of his friends have sought asylum in France, Dlil is confident his year-long quest will eventually end in England. He spends his nights making the nine-mile walk from the camp to the railway terminal, displaying cuts from barbed wire and bruises from clashes with the police. When asked how he usually spends his days in Calais, he breaks into a wide smile.

“England,” he grins. “I dream about England all day.”

When it comes to ransomware, you don't always get … END_OF_DOCUMENT_TOKEN_TO_BE_REPLACED

Peyton Carr is a financial advisor to founders, … END_OF_DOCUMENT_TOKEN_TO_BE_REPLACED