You are here: Home / Science / It’s Open Season on Interpreting the Geology of Pluto and Charon 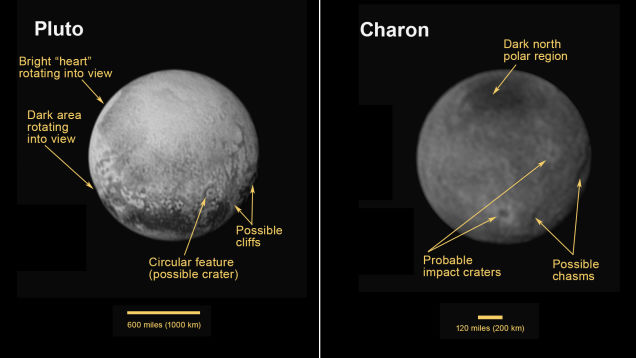 At less than a million miles from Pluto leading up to closest approach flyby on Tuesday, the New Horizons probe is sending back outright spectacular images of the dwarf planet and its largest moon.

Every batch of best-ever images sparks speculation on what geology underlays the features on these distant, rocky worlds.

Geomorphology is the large-scale study of landforms, unravelling the story of how they formed like a murder mystery on geologic timescales of millennia. We’re just starting to get back images from the New Horizons probe that are detailed enough to start guessing at the geomorphology of Pluto and now of its largest moon Charon.

Days after getting our first close-up look of Pluto’s enormous moon Charon, we’re seeing it in enough detail to start identifying traces of its geology. Admittedly, it’s mostly guesswork at this resolution, but it’s enough to eyeball potential craters and chasms of a geologically active world!

The dark anti-polar cap we saw in the earlier, far-blurrier images is still a coherent if mysterious feature, a ragged patch stretching over 320 kilometers (200 miles). Its source is open to wild theorizing: a compositional change due to some To Be Determined process, a region that’s been melted and refrozen as larger crystals, a deposition spot within some temporary, nebulous atmosphere formed by stealing stray gases from Pluto, or something altogether different.

Unlike the cantaloupe-texture hexagons of Pluto, Charon is home of circular features that are very likely craters. The most prominent suspected crater is a 96.5 kilometer (60 mile) diameter circle near the south pole. Bright rays radiating out from from it suggest it formed relatively recently, meaning sometime within the last billion years. The dark center suggests the crater floor might be exposing a different type of icy material than coats most of the planet, or ice that refroze with larger, less-reflective grains after the impact.

But the most interesting features of all are dark, linear areas: potential chasms. If they are chasms, we’re looking at gaping canyons that put Earth’s wimpy Grand Canyon in a corner of shame for being such a weak attempt at splitting the surface. However exactly we end up defining it, if it’s a fault or a surface disruption with depth of any type, it’s shocking us by revealing moon we thought would be near featureless and rather boring is actually home to some sort of geological activity. Or maybe Mass Effect was unintentionally truthful, and those are the flaws in otherwise perfect camouflage for a mass relay.

Meanwhile, on Pluto the initial interpretation of, “Look, Pluto has a heart!” morphed into, “This band o’ squiggly stuff sure is interesting,” and is now elevated to actual potential geology of cliffs and craters.

The “band of complex patterns” is evolving into potential cliffs with distinctive relief, and some of the hexagonal texture is starting to look like a complex crater with a central peak.

I’m unreservedly excited at all this new science coming in, but at the current resolution it’s a bit hilarious to declare we know what any of it is for certain. When showing off the latest images to a geoscience friend at a coffee shop earlier this afternoon, she burst out laughing at the annotations.

Her take on a hypothetical conversation between deputy lead scientist William McKinnon and the press officer Tricia Talbert is likely far too close to the truth for comfort:

With that as our disclaimer that all these interpretations should be read with a decidedly uncertain tone ending on a questioning inflection. Until we get even better images in an excitingly-short few days, these geomorphic interpretations feel a bit like naming shapes in the clouds, but it sure is a fun game to play. Now I want French artist Boulet to share his pareidolia interpretation of Charon’s surface before the images are supplanted with something even more detailed!

The New Horizons probe is currently in good health (thankfully!), and is on schedule for its closest approach to Pluto early on Tuesday morning. We’ll keep bringing you the latest updates, and of course we’ll have a live stream of the historic flyby!

Source: io9 It’s Open Season on Interpreting the Geology of Pluto and Charon | Top image: Pluto and Charon as seen by New Horizons on July 11, 2015, with annotations of current geological interpretations of surface features. Credits: NASA/JHUAPL/SWRI

When it comes to ransomware, you don't always get … END_OF_DOCUMENT_TOKEN_TO_BE_REPLACED

Peyton Carr is a financial advisor to founders, … END_OF_DOCUMENT_TOKEN_TO_BE_REPLACED