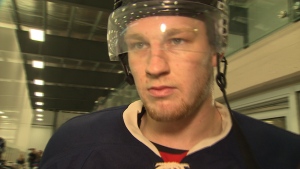 A hockey tournament featuring several NHL players in Bedford, N.S. Saturday raised $130,000 for the Heart and Stroke Foundation and the QEII Foundation. The tournament was held in honor of Jordan Boyd, a 16 year-old who died two years ago from an undiagnosed heart condition while in training camp with the Acadie-Bathurst Titan, a QMJHL team.

After Boyd died, two members of his family found out they also had the same heart defect.

His father, Steve, is encouraging other young elite athletes to get detailed tests done before they head off to training camps.

“Jordan had a QMJHL medical six weeks before he passed away and nothing came up, so basic medical testing normally doesn’t find the kind of thing that Jordan had,” he said.

Six teams battled for the Boyd Cup. Some of the NHL players who attended were Nathan MacKinnon and Brad Marchand.

This is the second year for the Jordan Boyd Celebrity Hockey Challenge.

“It feels good I guess to see the support of the community and everybody that’s come out to support the cause and remember Jordan and what a great young man he is, but at the same time we’re obviously quite sad that we’re having this day in memory of Jordan,” said Boyd’s father.

When it comes to ransomware, you don't always get … END_OF_DOCUMENT_TOKEN_TO_BE_REPLACED

Peyton Carr is a financial advisor to founders, … END_OF_DOCUMENT_TOKEN_TO_BE_REPLACED