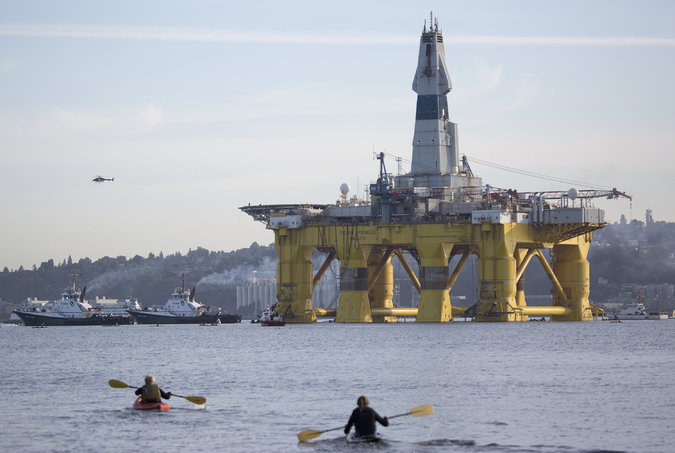 SEATTLE - The U.S. Coast Guard temporarily detained two dozen protesters who formed a blockade with kayaks and other vessels Monday to try to stop Royal Dutch Shell’s drill rig as it left Seattle on its way to explore for oil in the Arctic Ocean.

The protesters were scooped up from the water because they were violating the safety zone around the Polar Pioneer, which departed around 6 a.m., Coast Guard Lt. Dana Warr said. They were released after receiving violation notices that carry fines, the Coast Guard said.

Some protesters had indicated they hoped to confront the rig off Port Townsend on Washington’s Olympic Peninsula. However, Petty Officer Amanda Norcross said late Monday night that a gale warning was in effect in that area until Tuesday morning. She said the Coast Guard had not had any more interactions with protesters there.

About a dozen “kayaktivists” paddled out around 4 a.m. Monday to try to prevent the 400-foot-long rig from leaving Seattle, said Cassady Sharp, a Greenpeace spokeswoman. Several dozen supporters in kayaks and canoes lined up behind them, she said.

Seattle Councilman Mike O’Brien was among those detained. He and others in kayaks paddled into Seattle’s picturesque Elliott Bay before dawn to oppose Shell’s plans to open a new frontier of fossil fuel exploration off Alaska’s coast.

“That monstrous rig is headed to the Arctic to attempt to do something unconscionable,” he said in a text message as he was processed by the Coast Guard at its offices. “I had done everything I know how to do as a citizen, an activist, and as a councilmember to stop Shell from drilling in the Arctic.”

The petroleum giant has been using the port to load drilling rigs and a fleet of support vessels with supplies and personnel before spending the brief Arctic summer in the Chukchi Sea, which stretches north from the Bering Strait between Alaska and Russia.

Shell spokesman Curtis Smith said Monday that the vessels are on the way to Alaska.

“We remain committed to operating in a safe, environmentally responsible manner and look forward to exploring our Chukchi leases in the weeks to come,” he said in an email.

The Coast Guard picked up Kelly Mears, 28, in a yellow double kayak as he and others unfurled a massive “Shell No” banner on the water.

“Ultimately, I think that it’s pretty negligent decision to allow the vessel to drill in the Arctic,” said Mears, who came from South Carolina in April to participate in a series of protests. “My personal moral compass wasn’t allowing me to stand idly by and bemoan it as something that we can’t escape from.”

Monday’s blockade was the latest protest since the Polar Pioneer arrived in Seattle in May. Activists say they are concerned about the risks of an oil spill in the remote Arctic waters and the effects that tapping new oil and gas reserves will have on global warming.

Activists also have chained themselves twice to a support ship in Bellingham, north of Seattle. They have tried to block entrances to the Seattle terminal where the rig was loaded. Several have been arrested.

Officials in Alaska, including the governor, have touted the economic benefits that drilling could bring there and to the Pacific Northwest.

When it comes to ransomware, you don't always get … END_OF_DOCUMENT_TOKEN_TO_BE_REPLACED

Peyton Carr is a financial advisor to founders, … END_OF_DOCUMENT_TOKEN_TO_BE_REPLACED