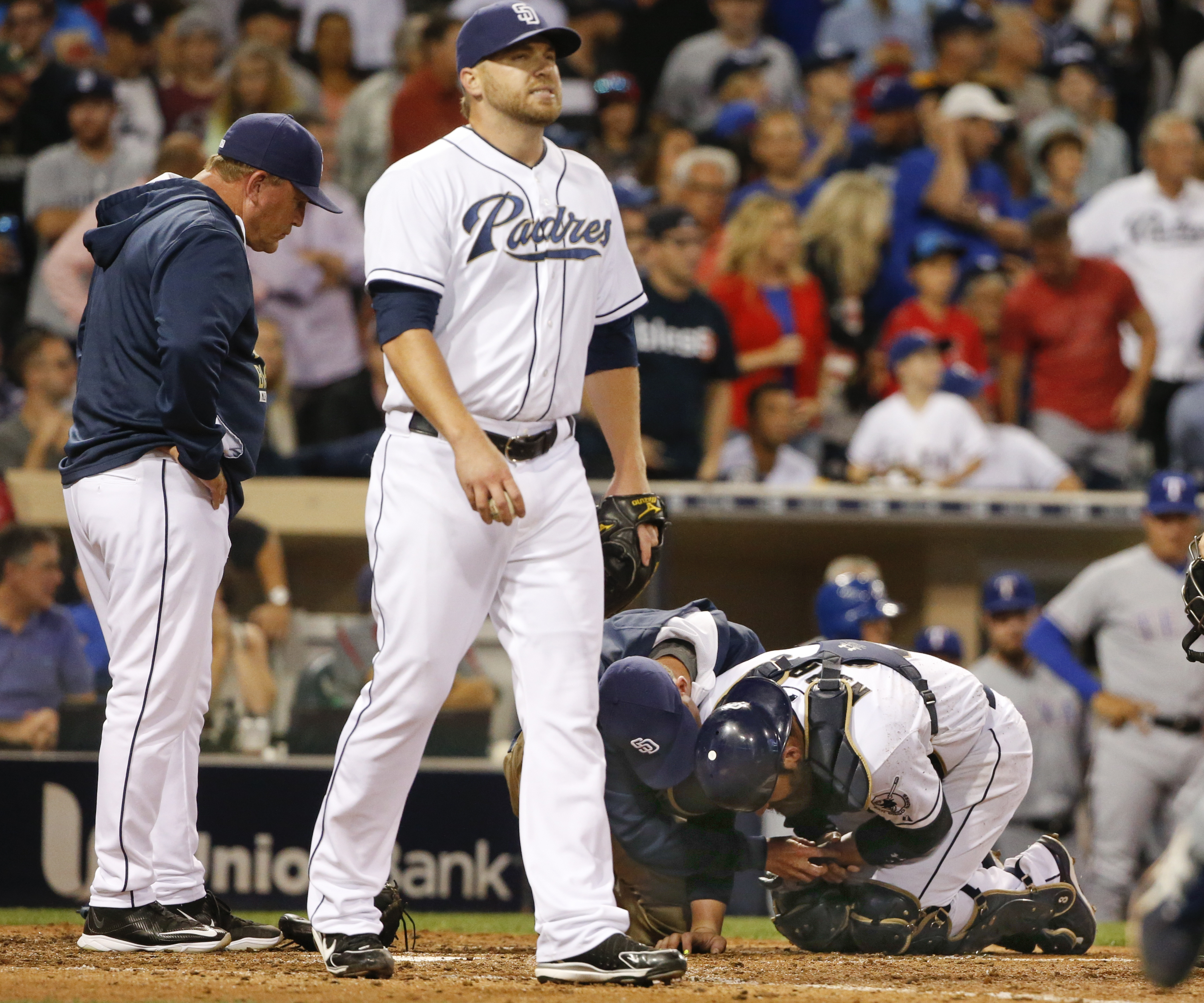 Kemp homered and drove in four runs but on a night the Padres lost three players to injury, it wasn’t enough to overcome a four-run seventh inning in the Texas Rangers’ 8-6 win on Tuesday night.

Kemp’s two-run homer in the fifth, his 17th, gave the Padres a 4-3 lead. But Elvis Andrus tied the game in the sixth with a sacrifice fly, then keyed the big seventh inning.

The inning started with reliever Marc Rzepczynski (0-1) getting the first two outs before the Rangers broke a 4-all tie on Andrus’ bases-loaded single off Sean Kelley. Two more runs scored on catcher Derek Norris’ fielding error on a thrown home.

Andrus capped off the inning with a straight steal of home with right-hander Kevin Quackenbush pitching.

“It was a tough night, for sure,” Kemp said. “”That’s baseball, man. These things happen sometimes. All we can do is to come in tomorrow and see what the diagnosis is and move on and get ready to play.”

Norris got hurt while attempting to tag out Adrian Beltre at the plate in the seventh inning, suffering a strained left shoulder. Kelley exited moments later while throwing a warmup pitch with a strained right forearm. First baseman Yonder Alonso left in the third with lower back tightness.

Kemp has a major-league best 38 RBIs since the All-Star break.

Texas, which has won eight of 11, remained one game ahead of Minnesota for the final AL wild-card berth.

“Exciting baseball but that is our guys,” Rangers manager Jeff Banister said. “We let these guys play. When they see things on the field … that’s playing baseball.”

The Padres loaded the bases with no outs in the ninth against Rangers’ closer Shawn Tolleson. He struck out Justin Upton looking before Jed Gyorko had an RBI single and Austin Hedges a sacrifice fly. Tolleson retired Cory Spangenberg on a fly out to end the game.

Fielder hit a 95 mph fastball off Andrew Cashner that skimmed off the top of the center-field wall for his 18th home run.

After getting two outs in the seventh, Rzepczynski gave up a single to Fielder and was replaced by Kelley. Beltre singled Fielder to second, who then went to third on a passed ball. The right-handed Kelley intentionally walked lefty Rougned Odor to load the bases.

Andrus followed with a sharply-hit single to right to drive in Fielder. Kemp’s throw to the plate was in time for Norris, who dove to his left to tag Beltre. But on the slide, Beltre’s foot knocked the ball out of Norris’ glove and to the backstop, allowing Odor to also score.

Norris, who was on the ground holding his left arm, left the game. Kelley threw one warm-up pitch to Norris’ replacement, Austin Hedges, then walked off the mound.

Quackenbush replaced Kelley, and with a 2-1 count on Will Venable, Andrus took off for home. He was about three-fourths of the way to the plate before Quackenbush delivered the pitch, which was low and away.

Kemp extended his career-best streak of reaching base in 21 straight games. Kemp is now tied with Pittsburgh’s Andrew McCutcheon for third in the NL with 85 RBIs.

IT’S NOT THE FIRST TIME

Andrus has stolen home four times in his career. Before Tuesday night, the last time he pulled off the feat was Aug. 19, 2013 against Houston.

Rangers: OF Josh Hamilton (left knee inflammation) and C Carlos Corporan (left thumb sprain) were activated from the 15-day DL. Hamilton, who had missed 18 of the previous 24 games, is expected to be restricted to pinch-hitting duty.

Padres: CF Wil Myers (left wrist tendinitis) began a rehab assignment with Single-A Lake Elsinore. Myers has missed 95 games since May 11. … Alonso was lifted for a pinch hitter in the third inning after he experienced lower back tightness.

Rangers: LHP Cole Hamels, makes his sixth start since being acquired in a trade with Philadelphia. Hamels, who grew up the San Diego suburb of Rancho Bernardo, is 9-2 with a 2.15 ERA in 16 starts against the Padres.

Padres: RHP Ian Kennedy has pitched much better in the second half but was inconsistent with his normally solid command in his last start, a 7-1 loss at Philadelphia. The right-hander needed a near-season high 118 pitches to get through 6 2/3 innings as he walked five, hit a batter and threw a wild pitch.

When it comes to ransomware, you don't always get … END_OF_DOCUMENT_TOKEN_TO_BE_REPLACED

Peyton Carr is a financial advisor to founders, … END_OF_DOCUMENT_TOKEN_TO_BE_REPLACED