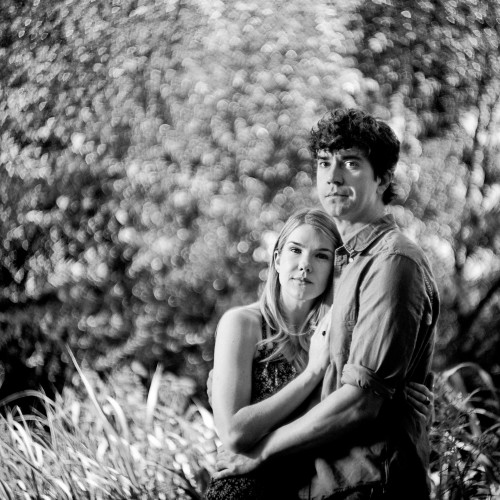 Hamish Linklater was singing. Lily Rabe was not listening. As Mr. Linklater warbled, Ms. Rabe lay in bed with her hands pressed firmly over her ears, a pained expression on her face. (This seemed excessive; he was only a little off-key.)

They were rehearsing a scene from “Cymbeline,” which starts previews on July 23 at Central Park’s Delacorte Theater. Ms. Rabe plays the king’s “stern daughter,” Imogen. Mr. Linklater, in a feat of double-casting, plays both her husband, the virtuous Posthumus Leonatus, and her stepbrother and unwanted suitor, the cloddish Cloten, who serenades her with “Hark, hark, the lark.”

“What were you singing while I was brushing my teeth?” she asked him on their lunch break.

It was Sam Smith’s “Stay,” a song Mr. Linklater admitted to with some reluctance. “Typically my serenading songbook is more Celtic and ancient,” he explained.

Whatever the tune, Ms. Rabe, 33, and Mr. Linklater, 39, have emerged as two of the most captivating and spirited Shakespearean actors of their generation, able to render that 400-year-old language feelingly and accessibly. They were first cast opposite each other in 2010, as Portia and Bassanio in the Public Theater’s Shakespeare in the Park production of “The Merchant of Venice,” starring Al Pacino. They reunited for a contemporary comedy, Theresa Rebeck’s “Seminar,” which ran on Broadway in 2011.

Back at the Delacorte, she played Rosalind without him in “As You Like It,” and he managed a couple of identical twins in “The Comedy of Errors,” partnered by Jesse Tyler Ferguson. But there was considerable anticipation when they were announced as last summer’s Beatrice and Benedick in “Much Ado About Nothing,” adversaries in the battle of the sexes who fall, unexpectedly and helplessly, in love.

Ms. Rabe and Mr. Linklater are in love themselves, though that’s an aspect of their lives they prefer not to discuss in great detail. (Or rather, they’ll discuss it freely, only to follow up with a flurry of courteous, contrite emails asking that these matters be left mostly private.)

Whatever their personal lives, their harmony onstage has been visible from the first. His mobility contrasts with her stillness, her clarity with his bluster. “Hamish is essentially a comedic actor who has great tragic depth,” said Oskar Eustis, the Public’s artistic director, in a telephone interview. “Just as Lily is essentially a tragedian who has great comic chops. There’s a charge that goes between the two poles of their acting, which is thrilling to watch.”
On their break, they’re like more casual versions of their stage selves. Mr. Linklater, wearing a faded Lakers shirt, is voluble and jesting. Ms. Rabe, in a gray sundress, is quieter and more serious.

They both come from acting families. Mr. Linklater’s mother, the vocal expert and professor Kristin Linklater, had him playing Shakespeare at 9, for Shakespeare & Company, in Lenox, Mass., a troupe she helped to found. “We all lived in that Edith Wharton house in the Mount,” he said. “It was like a commune.”

He had a brief stint at Amherst College, “to really try to be an English major,” but dropped out quickly and began an acting career that has included stints on “The Newsroom” and “The New Adventures of Old Christine.” His 2002 marriage, to the playwright Jessica Goldberg, ended in divorce. He and Ms. Goldberg have an 8-year-old daughter, Lucinda Rose, who occasionally comes to rehearsal.

Ms. Rabe’s parents, the playwright David Rabe and the actress Jill Clayburgh, didn’t push her toward performing. “They were making efforts to have me feel like this was just one of all sorts of options,” she said.

It didn’t work. “All my mother and I ever did was come into the city and go to plays,” said Ms. Rabe, whose mother died during her run in “The Merchant of Venice.” She began to act professionally even before she graduated from Northwestern University. Her recent roles include a nun and a Stevie Nicks-type witch on the television anthology series “American Horror Story.”

The two had met a few times before “Merchant,” particularly in 2006, when Mr. Linklater played opposite Ms. Clayburgh in Keith Bunin’s “The Busy World Is Hushed.” (He’d earlier played her son in a TV pilot.) But “Merchant” was their first chance to work together. If Bassanio wasn’t much of a stretch for Mr. Linklater, who downed iambic pentameter with his mother’s milk, it was Ms. Rabe’s first crack at Shakespeare, which she’d seen a lot of, but hadn’t acted in, not even in college.

“I was definitely learning on my feet,” she said in a follow-up conversation. “Thinking I was going to get fired every second.” (On the contrary, Ben Brantley in The New York Times described her Portia as a “smashing breakout performance.”)

There was a particularly engaging quality to her scenes with Mr. Linklater. Jesse L. Martin, who played Gratiano to Mr. Linklater’s Bassanio, noticed a certain sympathy between them, even in rehearsal. “I don’t think they ever mistrusted each other,” Mr. Martin said, speaking by telephone. “They were always wide open with each other.” He laughed and added, “There’s something to be said for chemistry.”

But Mr. Linklater disdained the notion that their stage chemistry is anything special. He described watching Ms. Rabe with David Furr, who played Orlando to her Rosalind in “As You Like It” and who plays her brother in “Cymbeline,” as a kind of torture. “I get furious,” he said. “I’m like, ‘They’re born to be together.’ ” (Mr. Linklater sounded very impassioned; Mr. Furr should maybe watch out.) But the likelier truth, he acknowledged, is that Ms. Rabe “is really good at acting chemistry,” and he thinks that he is, too. “I can’t stand Jesse Tyler Ferguson, but it always seems like we’re having a good time,” he joked.

Ms. Rabe and Mr. Linklater have markedly different acting styles, from the first day of rehearsal to preferred methods of post-show recovery. (She does a vocal cool-down; he drinks a shot of Dewars.) As Daniel Sullivan, their director in both “Merchant” and “Cymbeline” said: “Lily is very methodical in relation to the text. Hamish is really improvisatory. Hamish is off-book early. Lily carries a script much longer.”

Her work is a process of opening herself up to what a character demands. She describes “penny-drop moments” when a line finally sounds and feels right. Mr. Linklater, by contrast, has to find ways to settle himself down. He’ll hurl himself at a part, trying out every possible permutation, until he can relax into it, “throw everything away” and see what that evening’s performance requires.

Yet they manage to meet somewhere in the middle. He spurs her on to greater playfulness, she pushes him toward “more presence and more depth,” he said. Ismenia Mendes, who starred with them in “Much Ado,” remembered them sitting in corners of the rehearsal room together, working scenes privately, giving each other notes. “They trust each other so much that they take enormous risks as actors together,” she said.

And their work doesn’t end in the rehearsal room, which feels natural to them. “Because of Shakespeare & Company and growing up in a commune, that felt sort of organic,” Mr. Linklater said. Ms. Rabe remembered her parents talking through their work at home. “I’ve never had that feeling, ‘Oh, I want to close my script and leave it at the rehearsal space,’ ” she said.

Colleagues were worried they’d exhaust each other, but apparently they haven’t. They’ll often arrive the next day with a new — and sometimes misguided — approach. Ms. Rabe is kind enough to blame Mr. Linklater only occasionally.

No matter how hard they work — to say nothing of the efforts of co-stars like Raul Esparza, Patrick Page and Kate Burton — it’s uncertain if they’ll make a success of “Cymbeline.” One of Shakespeare’s late plays, it borrows from comedy, tragedy, history, fairy tale, Christian allegory and a few other genres besides. George Bernard Shaw heckled it in Victorian style, calling it “vulgar, foolish, offensive, indecent and exasperating beyond all tolerance.”

But Ms. Rabe and Mr. Linklater profess to love it. She looks forward to another chance to dress up as a boy (as Portia and Rosalind, she got to put pants on, not so much as Beatrice) and to play a Shakespeare part that doesn’t require a wig.

Of course, she appreciates the text, too. “There’s so much magic in it,” she said. “It’s so incredibly sad, but also full of this softness and this hope.” She even has a thing for Cloten.

Mr. Linklater looked at her darkly. “Drink it in while you can,” he warned. “But when you clock in at the park, remember that Posthumus is your guy.”

Whether or not “Cymbeline” is a hit, they’re hoping it leads to more summers in the park. “As long as they let us come back, we’ll do it,” Ms. Rabe said. Katherine and Petruchio seem an obvious pairing for them, but maybe they’ll try their hands at the tragedies, too. Macbeth and his lady, perhaps Antony and Cleopatra.

Mr. Linklater admired Ms. Rabe’s profile, then jokingly suggested a role ripe for her interpretation: “Othella. You can see it, right?”

When it comes to ransomware, you don't always get … END_OF_DOCUMENT_TOKEN_TO_BE_REPLACED

Peyton Carr is a financial advisor to founders, … END_OF_DOCUMENT_TOKEN_TO_BE_REPLACED