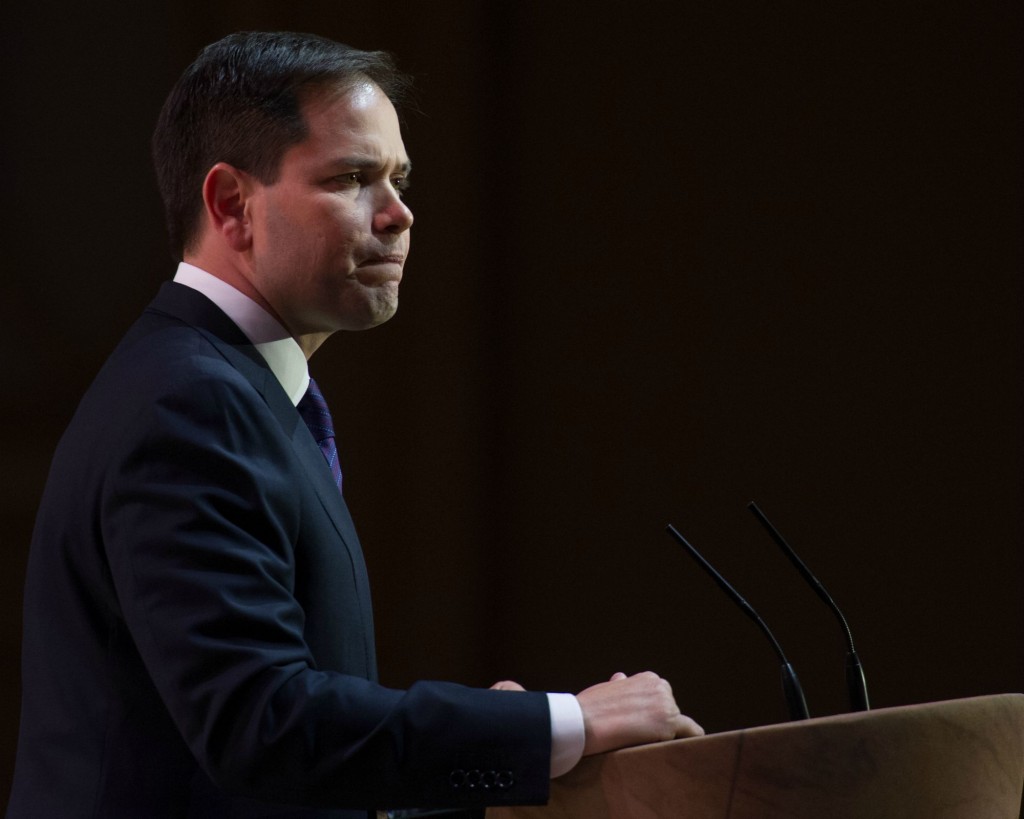 Ending the Clean Power Plan, lifting America’s crude oil export ban, and allowing states — not the federal government — to regulate fracking would be some of Marco Rubio’s top energy priorities if he becomes president. That’s according to a preview of his energy plan released Wednesday, ahead of a speech in front of the Oklahoma Independent Petroleum Association.

“Our outdated government continues to make energy one of the most politicized and regulated aspects of our economy,” Rubio said in an email previewing his comprehensive energy plan, which he said he’ll roll out sometime this fall. “America’s energy future must be entrusted to our businesses and scientists, not our bureaucrats.”

One of the first things Rubio would do as president, according to his previewed plan, would be to lift the current ban on crude oil exports, which has been in place since the 1970s. Rubio called the ban “a perfect example of just how outdated Washington has become,” arguing that “lifting the crude oil export ban would be an immediate boon to our economy” that would “create hundreds of thousands of American jobs” and “make American a net energy exporter within a few years.”

But lifting America’s crude oil export ban could also come at a cost to the environment. A recent study conducted by the Center for American Progress estimated that, if the crude oil export ban were to be lifted, 7,600 more oil wells would be drilled each year than if the ban stayed in place. This would mean a huge amount of land — an area larger than Utah’s Arches National Park — would be turned over to oil development each year.

Lifting the export ban would also have climate ramifications, as lifting the ban would likely ramp up oil production, encouraging producers to flood the market with crude oil. According to the high-end estimates produced by the CAP study, lifting the crude export ban could add more than 515 million metric tons of carbon pollution each year — the equivalent of adding 108 million passenger vehicles to roads.

Rubio’s proposed energy plan would also target the Environmental Protection Agency’s Clean Power Plan, which Rubio called “one of the most expensive and costly regulations ever created.” His opposition to the plan is no surprise: during a campaign stop in Ohio earlier this summer, he argued that the Clean Power Plan would do nothing for the environment while drastically increasing the cost of living across the country.

That’s a line — little benefit to the economy, high cost to the consumer — that Rubio has used before. In August, at a the Koch-organized Freedom Partners Policy Leaders Forum, Rubio argued that places like China and India will continue to burn fossil fuels, rendering the environmental impact of the Clean Power Plan negligible. “And so the bottom line is, as a policy maker, we just balance our interest in ecology, which is legitimate, with our interest for the economy,” Rubio said. “And the bottom line is that American energy will allow millions of people to improve their standard of living, just the way it’s eradicated poverty for millions of people around the world.”

Several studies, however, have found that under the Clean Power Plan, utility bills would likely decrease, as it encourages energy to be used more efficiently.

Rubio’s final point in his energy preview highlights his intention, if elected, to give states a large amount of leeway in how they regulate energy production with their borders — namely, he would let states decide whether or not to regulate or restrict fracking.

“State and local governments are far better equipped than Washington to oversee energy production and balance environmental concerns,” Rubio said in the preview.

The previewed plan said nothing about encouraging renewable energy, and did not mention climate change, a subject on which Rubio has become a staunch denier. In his presidential campaign announcement, Rubio said that he didn’t believe that mankind was contributing in any way to climate change.

Rubio is not the first Republican presidential candidate to release a plan regarding energy — Bobby Jindal, Chris Christie, and Lindsey Graham have all released full or partial plans describing how their administration would handle United States energy policy.

When it comes to ransomware, you don't always get … END_OF_DOCUMENT_TOKEN_TO_BE_REPLACED

Peyton Carr is a financial advisor to founders, … END_OF_DOCUMENT_TOKEN_TO_BE_REPLACED