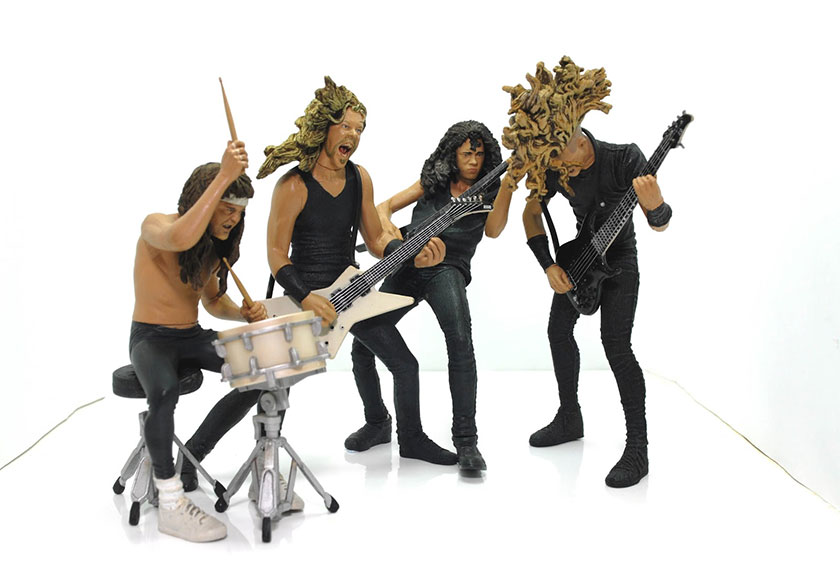 The members of the rock band Metallica demonstrated live, on the Tonight Show Starring Jimmy Fallon’, that their ‘Enter Sandman’ sounds very good when it is played on classroom instruments. Invited on the talk show hosted by Jimmy Fallon to promote their new studio album, ‘Hardwired… To Self-Destruct’, launched on November 18, the metal band interpreted ‘Enter Sandman’ in a way like never before, using exclusively classroom musical instruments. James Hetfield, Kirk Hammett, Robert Trujillo and Lars Ulrich were accompanied by the host of the show and by The Roots. The guitarist Kirk Hammett announced the possibility of Metallica to record a cover album, after 18 years from ‘Garage Inc.’, which became one of the most successful compilations of all time.

Before the launch, James Hetfield admitted in an interview for the DPA, that the 8 years pause was ‘too long’. ‘I admit, and the fans were clear that it was too long. I forgot how wonderful it is to give birth to songs, and people listen to them and get something after. It is amazing that we have the ability to create something from nothing and that this connects with someone else’, says Hetfield. About the title of the new album, which can be considered ‘dark’, the band leader stated that things are not at all like this. ‘You say that is dark, but for me is light because I can share the darkness. When you connect it to the darkness of someone else is light. All the other albums are equally dark. When I write the lyrics, I only write what is in me’, confessed Hetfield. He added that he feels happiness when he sings. ‘Is happiness when I sing, when I get them out of me. It is better outside than inside’ said the vocal of Metallica.

When it comes to ransomware, you don't always get … END_OF_DOCUMENT_TOKEN_TO_BE_REPLACED

Peyton Carr is a financial advisor to founders, … END_OF_DOCUMENT_TOKEN_TO_BE_REPLACED