You are here: Home / Sports / Miesha Tate: ‘It’s just a fact, I pose the biggest threat’ to Ronda Rousey 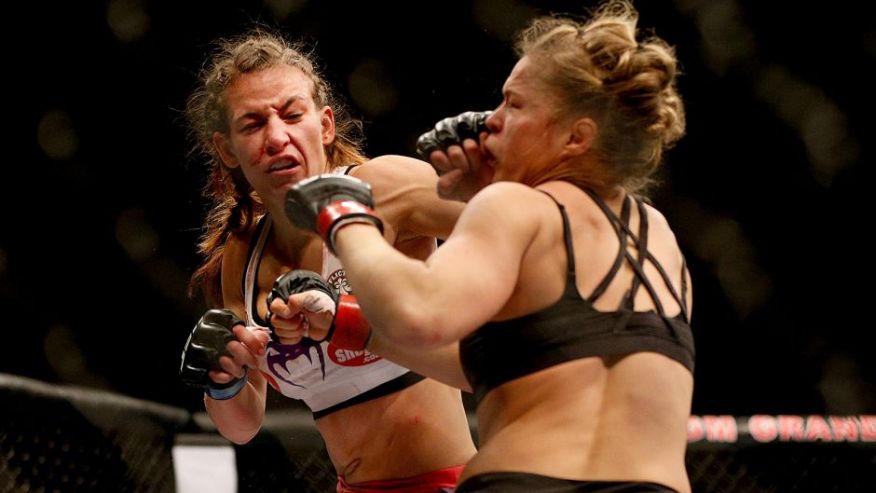 Just over a week ago, Miesha Tate was seemingly next in line for a shot at women’s bantamweight champion Ronda Rousey until she found out along with the rest of the world that former boxer turned mixed martial artist Holly Holm would get the fight instead.

Tate never went all-in on a third fight with Rousey considering she hadn’t received a contract nor an official offer from the UFC despite promises from president Dana White that she was going to get the next title shot.

Still, Tate admits it was a little disconcerting when she got the news following Rousey’s announcement on television versus being told by UFC officials that she wasn’t getting the fight after all.

“I didn’t know about it until the rest of the world,” Tate told TMZ.com from the set of a movie she’s filming in Philadelphia. “Actually after because I was still sleeping and then I woke up and had like 30 texts on my phone saying ‘awww that sucks.'”

Tate has fought and lost to Rousey on two previous occasions although she’s taken the champion deeper into a fight than any other competitor in history.

According to White, it’s those two previous losses that ultimately cost Tate the rematch because “everyone’s already seen that fight.” He expects Holm to attract more attention to the fight with Rousey although from the sound of things Tate doesn’t exactly agree.

Tate spoke to FOX Sports just days before the Rousey vs. Holm fight was announced and stated that she was more than ready to not only compete for the belt again but to win it this time.

She’s gone further with Rousey than any other fighter and Tate knows where she’s come up short in the past and how to correct those mistakes for a third fight.

“I think I’ve proven that I’m the closest to being able to figure her out, out of anyone in the division,” Tate said. “I actually make Ronda fight and if people don’t like watching good fights then I don’t understand why anyone’s a fan of the UFC. When her and I fought, it was fire and fuel and it was exciting and the fans loved it. It was insane. I don’t know why anyone wouldn’t want to see it.”

As dominant as Rousey has been lately finishing her last four opponents in just 130 seconds, Tate believes it all comes down to the level of competition. She took Rousey deep into the first round in their initial fight and then the third round during their rematch.

Tate says that’s already enough to prove Rousey isn’t invincible and she’s confident that when they meet again the result will ultimately end with the former Olympic bronze medalist’s first loss in MMA.

“I feel like if Ronda was always fighting me, people wouldn’t think she’s as unstoppable as they are buying into because she’s fighting these other girls — like Bethe (Correia), I just don’t think she’s that great, she’s not that good, she was overhyped and she got exposed,” Tate said candidly.

Rousey is currently enjoying nearly 12-to-1 odds in her favor to beat Holm on Jan. 2 at UFC 195. Holm is a former boxing champion multiple times over, but she only has two UFC fights in her career with both ending by decision.

Tate hasn’t made a prediction for the title fight, but she knows deep down inside that there’s no one on the UFC roster with a better chance to dethrone Rousey than her.

When it comes to ransomware, you don't always get … END_OF_DOCUMENT_TOKEN_TO_BE_REPLACED

Peyton Carr is a financial advisor to founders, … END_OF_DOCUMENT_TOKEN_TO_BE_REPLACED