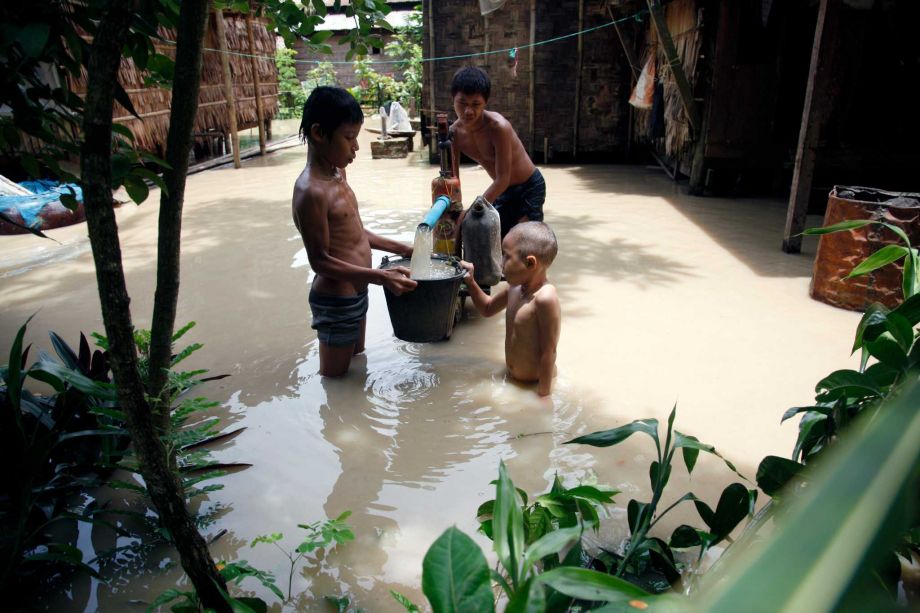 Myanmar opposition leader Aung San Suu Kyi expressed concern Thursday that massive flooding in much of the country might be used as a pretext to undermine November’s general election.

In a video appealing to the international community to help flood victims, the Nobel Peace Prize laureate drew a parallel with a referendum, carried out under military rule in 2008, that brought in the current much-maligned constitution.

The voting took place during widespread chaos following Cyclone Nargis, which killed an estimated 140,000 people. According to the official results, the charter was overwhelmingly confirmed, but many reports cast doubt on the fairness of the vote and the results. The constitution was drafted under military supervision and enshrines its dominance in government, making substantial democratic reforms difficult to achieve.

Suu Kyi’s National League for Democracy, which boycotted the 2010 general election, is expected to pose a strong challenge to the ruling Union Solidarity and Development Party this November.

The death toll from recent weeks of flooding is at least 69, and more than 259,000 people across 12 of the country’s 14 states and regions have been affected, according to the U.N. Office for Coordination of Humanitarian Affairs. The floodwaters have been spreading from northern and central Myanmar to the populous Irrawaddy Delta, the country’s rice bowl.

“Floods have inundated more than 1 million acres of farmland. Damage to crops and arable land is likely to disrupt the planting season,” the agency said in its latest report. It said priority needs include “food, water and sanitation, access to health care, and provision or repair of shelter.”

“We do not want this natural disaster to be a reason for upsetting the necessary political process without which our country will not be able to make long term progress,” Suu Kyi said in her video, which was posted on her Facebook page.

“We do not want such questions to be raised this time with regard to our elections. So let us deal with what we need to deal now, and in the best way possible, to make sure that the future of our people, socially, economical and politically, is assured,” she said.

Suu Kyi distributed aid in flood-hit areas this week, a day after President Thein Sein made a similar trip.

She also appealed for donor countries to give aid in what she called a coordinated fashion because “donations which are uncoordinated tend to go astray.” She asked for the help to be channeled through the NLD or her charitable foundation or other parties, by implication avoiding the government.

New York-based Human Rights Watch said in a critique that the 2008 referendum had been conducted “in an atmosphere of official coercion and vote tampering.” It cited reports of intimidation of voters by the authorities, and cases of voting simply being prevented, as well as other irregularities including the alteration of voting results.

Suu Kyi’s party has already said it is worried by inaccurate voter lists, which it fears will deny its supporters the right to vote. It boycotted the 2010 polls because it said election rules were unfair, but successfully contested consequent by-elections after changes were made to some of the laws.

When it comes to ransomware, you don't always get … END_OF_DOCUMENT_TOKEN_TO_BE_REPLACED

Peyton Carr is a financial advisor to founders, … END_OF_DOCUMENT_TOKEN_TO_BE_REPLACED