You are here: Home / World / Nairobi Locks Down as Obama Arrives for Kenya Visit 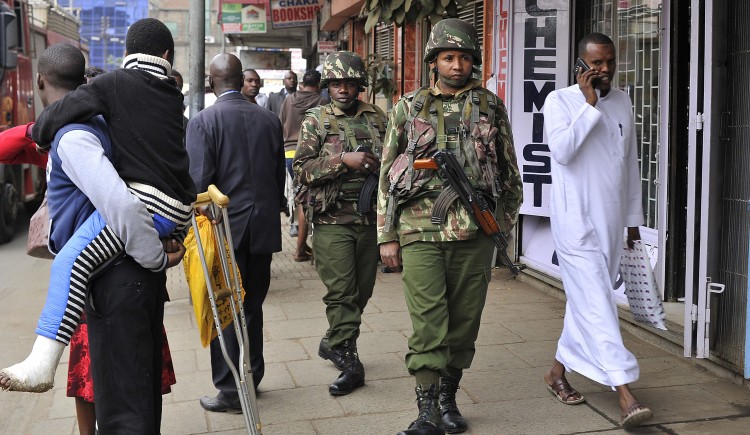 In this normally bustling, chaotic metropolis, the streets are unusually quiet. No groups of young men hang on corners, pedestrians are absent, beggars moved elsewhere.

Nairobi residents are on a lockdown starting Friday as President Obama arrives for a three-day visit. While his arrival is heavily anticipated as only a famous native son’s can be, many in the Kenyan capital are already chafing under the tight security measures meant to reduce crime and minimize terrorist threats.

“I can’t go to the bank and withdraw money simply because President Obama is coming,” said Lewis Asambe, 42, who lives in the Nairobi district of Eastleigh. “Our leaders need to be conscious and let us live a normal life. We don’t need to change anything because a visitor has come.”

The government has told non-essential businesses in Nairobi to close down. Residents are being directed to stay home. No loitering allowed. No visitors from out of town. Instead, the Kenya government wants locals to stay away, and those traveling from outside Nairobi to remain home until Obama leaves.

The heightened actions come after al-Shabab terrorists stormed a northeastern Kenyan university in April, killing 148, most of them students. Two years ago, the militant group attacked Nairobi’s Westgate Mall, killing 67 in a four-day siege. The mall reopened Saturday.

Interior Cabinet Secretary Joseph Ole Nkaissery said those violating the measures risk arrest. “We want to advise citizens to have their national identity cards (on them) and desist from loitering along the streets,” he said. “Any person found loitering and without identity card will be arrested and prosecuted.”

Beggars who depend on food from business owners in the capital were forcibly evicted from city streets while vendors and hawkers were shooed away from main roads.

President Obama is scheduled to hold talks with Kenyan President Uhuru Kenyatta to discuss security issues plaguing the country. He will also address the Global Entrepreneurship Summit and is expected to speak to Kenyan leaders about investment and economic growth.

Locals who had hoped to economically benefit from the visit say those hopes are now dashed. “We thought that it was about time to reap the harvest from the visit of President Obama,” said John Oduor, a vendor who sells bangles to tourists. “But we have been warned by security officers not to loiter and instead stay in our houses until Monday.”

Residents and business owners say the measures are too extreme, especially the razing of make-shift kiosks and stalls by security personnel. “They should know that we need to eat even if Obama is coming,” said Pauline Nyongesa, whose stall selling vegetables in Nairobi was destroyed by law enforcement. “President Obama will not give us aid to pay rent and feed our children.”

President Obama is expected to use the main artery Uhuru highway for his motorcade to access the U.S. embassy after his arrival late Friday local time. Even so, major arteries that connect the commercial capital are shut down, preventing commuters from carrying on with their daily routine.

Some locals were forced to return to their homes and wait until Obama leaves instead of going to work, school or running errands.

“I was heading to the capital to purchase some fruit and tomatoes but all roads are closed,” said Joan Wairimu, who lives in the Eastleigh district. “I have been forced to return home and wait for President Obama to leave the country.”

When it comes to ransomware, you don't always get … END_OF_DOCUMENT_TOKEN_TO_BE_REPLACED

Peyton Carr is a financial advisor to founders, … END_OF_DOCUMENT_TOKEN_TO_BE_REPLACED