You are here: Home / Science / New Horizons Has Made its Closest Approach to Pluto! 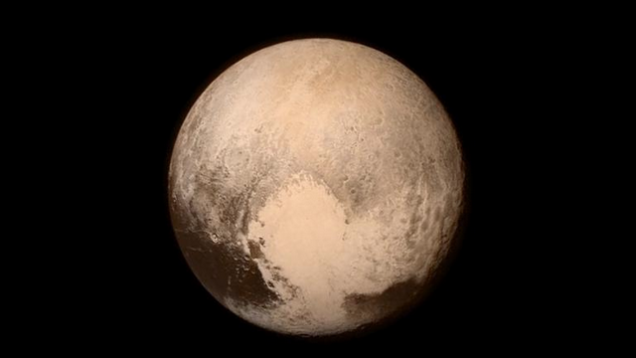 After nine years and over 3.26 billion miles, the New Horizons spacecraft made its closest approach to Pluto earlier today. Assuming it survived the encounter, the probe is now drifting away from the dwarf planet as it heads deeper into the Kuiper Belt.

Image Above: NASA posted this image of Pluto earlier this morning to its Instagram account. It’s the last picture sent to Earth of the dwarf planet before the probe entered into its autonomous data gathering mode (credit: NASA)

UPDATE: NASA switched New Horizons into data gathering mode for the encounter, so it’s going to be dark for a while. The team is not expecting to hear its first ping from the probe until about 8:34 pm ET/5:34 pm PT today (1:34 AM UTC next day). We’ll be posting a second live-stream at 8:30 pm ET/5:30 pm PT so be sure to come back to io9 for that!

In addition to the “I’m still alive” ping, NASA is expecting to receive data from the probe later today, including images. Remarkably, it will take New Horizons 16 months to transmit all the data it gathered during the encounter.

We obviously have no actual footage of New Horizons as it made its flyby, but NASA’s Eyes on the Solar System provided the next best thing. Here are some screen-grabs from the simulation:

New Horizons made its closest approach at 7:49 am ET/4:49 am PT. The timing of the encounter was set years ago after the Jupiter encounter. First call home is expected at 8:53 pm ET/5:53 pm PT. New Horizons mission controllers said the odds of the probe smashing into debris was about 1 in 10,000; fingers are crossed that this didn’t happen. We’ll obviously find out later tonight.

Scale of the #PlutoFlyby . It’s a close shave, but you could fit a proper planet in between. Glad they didn’t. pic.twitter.com/BDuZISF018
— Jarmo Korteniemi (@MarsJarmo) July 13, 2015

After the flyby, the probe will see Pluto by the reflected light of Charon. Here’s a post-closest encounter screen-grab:

Some astronomers speculate that there is atmosphere-sharing between Pluto and Charon owing to their relative mass and proximity. Space scientists would also like to know if the dark pole on Charon has anything compositionally similar to Pluto. During the flyby, the probe will be taking close-ups of that light heart-shaped region spotted late last week.

New Horizons has no deployable parts. The probe is designed like a thermos to be at constant room temperature. And after ditching six protective caps (five after launch, one after Jupiter), it’s just about pointing the whole damn craft instead of pulling things in and out.

It’s also the first space probe with a student-designed instrument — a dust collector. This device has been running since its departure, giving us a system-wide distribution, but NASA had to muzzle its sensitivity during the probe’s turning/manoeuvring stage so that it didn’t get overwhelmed with the noise (as in noisy data, not literal acoustic noise) of the probe’s engines; NASA plans on turning it back on as soon as possible.

After today’s flyby, the mission will be far from over. A second target will be finalized from the tiny pool of candidates in August, then manoeuvring thrusters in November, but the mission extension still needs to be approved in 2016. Kind of a no-brainer in my opinion.
Appropriately, Google has made the New Horizons flyby the Google Doodle of the day:

And the historic tweets:

Source: io9 New Horizons Has Made its Closest Approach to Pluto! [updating]

When it comes to ransomware, you don't always get … END_OF_DOCUMENT_TOKEN_TO_BE_REPLACED

Peyton Carr is a financial advisor to founders, … END_OF_DOCUMENT_TOKEN_TO_BE_REPLACED