You are here: Home / Technology / New Zenfones from Asus Emphasize Battery Life and Pics, Not Screens 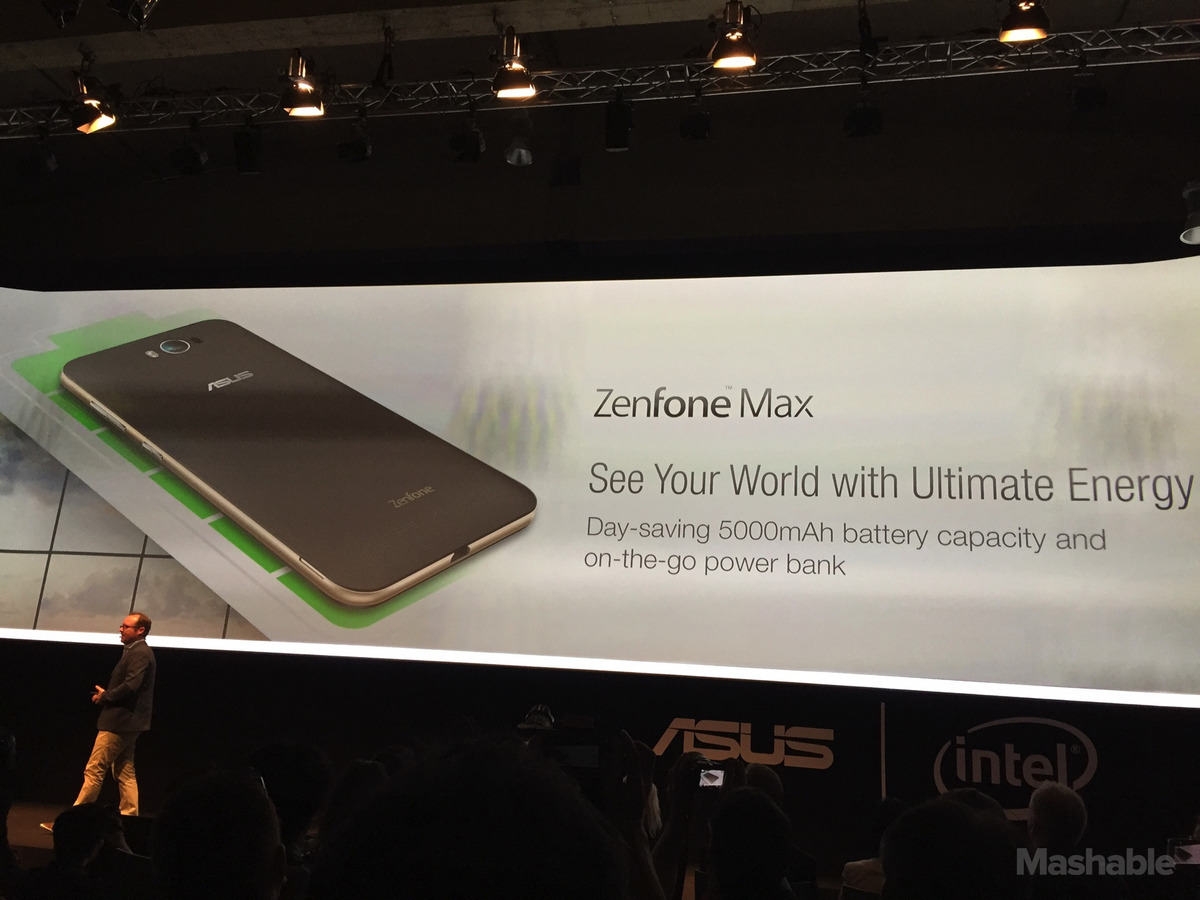 Rather than join everyone in bumping up screen resolutions, Asus is giving users what they really need: More battery life and better photos. At the IFA trade show, the electronics company announced a family of new Zenfones, including the Zenfone 2 Deluxe, Zenfone Max, Zenfone Selfie, Zenfone Zoom and Zenfone 2 Laser.

As previously detailed, the Zenfone Max is all about long-lasting battery life. With a 5,000 milliamp-hour (mAh) battery, it’s got one of the highest-capacity batteries of any smartphone.

Aside from its big battery, the Max is pretty much an entry-level Android smartphone with a 5.5-inch IPS display with an 1,280 x 720 resolution (HD) — mediocre by the standards of today’s flagships. Unlike the Zenfone 2, which is powered by an Intel Atom processor and 4GB of RAM, the Max is powered by a 1.2GHz Qualcomm Snapdragon 410 quad-core processor and 2GB of RAM.

It comes with 8GB or 16GB of internal storage, has a microSD card slot for expanding the storage up to 128GB, and two micro SIM card slots.

The Zenfone 2 Deluxe is a variant on the well-reviewed Zenfone 2. The internal specs are identical, save for the back cover, which has a prismatic pattern finish to it. It’s more eye-catching, for sure.

The Zenfone 2 Laser is another variant of the Zenfone 2. Its marquee feature is the pill-shaped laser autofocus sensor on the back that helps the 13-megapixel camera achieve autofocus in 0.2 seconds.

Selfie junkies will dig the Zenfone Selfie. Both the front and back of the phone have a 13-megapixel camera, each with LED flashes and laser autofocus. Think of it as Asus’ version of the HTC Desire Eye. And what selfie-focused phone would be complete without a beauty mode to apply “magical glamour”?

The Zenfone Zoom, on the other hand, has an enhanced 3x optical zoom on the camera’s 13-megapixel main camera. Not only that, but the camera has a macro focusing mode that lets you get as close as 2 inches in front of a subject.

Announced at CES, the Zoom has a powerful 2.3GHz Intel Atom quad-core processor, 2GB or 4GB of RAM and comes in 16GB, 32GB, 64GB and 128GB storage configurations. Like almost all ZenFones, it has a microSD card slot for storage expansion up to 64GB.

When it comes to ransomware, you don't always get … END_OF_DOCUMENT_TOKEN_TO_BE_REPLACED

Peyton Carr is a financial advisor to founders, … END_OF_DOCUMENT_TOKEN_TO_BE_REPLACED