You are here: Home / World / Obama and Putin Go Head-to-Head Over Syria Crisis 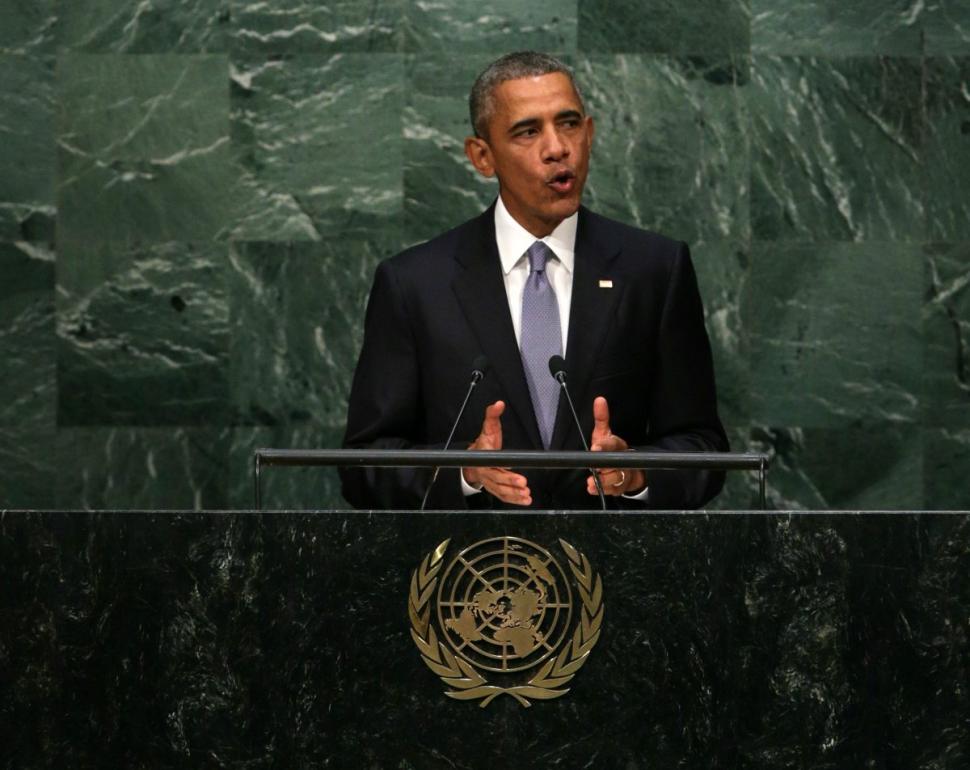 President Obama and Russian President Vladimir Putin went head-to-head over the Middle East and Islamic State terrorists Monday during a showdown at the United Nations, with Obama calling for the ouster of Bashar Assad and Putin arguing that the Syrian leader was the war-torn country’s only hope for Syria crisis.

“We must recognize that there cannot be, after so much bloodshed, so much carnage, a return to the pre-war status quo,” he said, blaming Assad for creating “the environment for the current strife” by brutalizing his people with “chemical weapons and indiscriminate bombing.”

Obama said ISIS’ bloody reign in Syria and Iraq is “an assault on all our humanity” but argued the only solution was “a managed transition away from Assad and to a new leader.”

“We think it’s an enormous mistake to refuse to cooperate with the Syrian government and its armed forces who are valiantly fighting terrorism face to face,” the Russian leader declared.

“No one but President Assad’s armed forces and Kurdish militia are truly fighting the Islamic State and other terrorist organizations in Syria,” he continued, laying the blame for ISIS and the chaos in Syria and the Middle East at Obama’s feet.

“Instead of the triumph of democracy and progress, we got violence, poverty and social disaster — and nobody cares a bit about human rights, including the right to life,” he said. “I cannot help asking those who have forced that situation: Do you realize what you have done?”

The two leaders also sparred over Ukraine, with Obama criticizing “Russia’s annexation of Crimea and further aggression in eastern Ukraine,” and arguing the sanctions that the United States and other countries responded with have “led to capital flight, a contracting economy, a fallen ruble, and the emigration of more educated Russians.”

Putin’s response was to claim Ukraine’s chaos was caused by a “military coup orchestrated from the outside that triggered a civil war,” rather than his country’s intervention, and to defend his seizure of Crimea and involvement in the country’s eastern region.

Obama’s speech came ahead of his first formal meeting with Putin in two years.

The relationship is as tense as ever, as Russia continues to support Syria’s embattled dictator and its continued involvement in Ukraine drives instability there.

Putin made a point to mock U.S. efforts against ISIS in Syria in a “60 Minutes” interview that aired Sunday night.

“The initial aim was to train 5,000 to 6,000 fighters, then 12,000, but it turns out that only 60 were trained and only four or five are actually fighting,” Putin said. “All the others simply ran away with their American weapons to Islamic State!”

Russia also just signed an intelligence-sharing agreement with Iraq to combat ISIS that also involves Iran and Syria, a compact that they didn’t run by the U.S. Putin has been backing Assad, while the U.S. is looking to find partners in the country who aren’t Assad to fight ISIS.

Putin wasn’t Obama’s only target. He also criticized China’s military activities in disputed territory in the South China Sea, encouraging them to resolve “disputes through international law, not the law of force.”

And Obama warned of a creeping “us versus them” racist mentality across the globe, taking a veiled shot at Donald Trump’s anti-immigrant comments.

Obama warned that even in advanced democracies, there was a creeping push from those who “insist on stopping the trade that binds our fates to other nations” and “calling for the building of walls to keep out immigrants.”

“Most ominously, we see the fears of ordinary people being exploited through appeals to sectarianism, or tribalism, or racism, or anti-Semitism; appeals to a glorious past before the body politic was infected by those who look different, or worship God differently; a politics of us versus them,” he warned.

When it comes to ransomware, you don't always get … END_OF_DOCUMENT_TOKEN_TO_BE_REPLACED

Peyton Carr is a financial advisor to founders, … END_OF_DOCUMENT_TOKEN_TO_BE_REPLACED