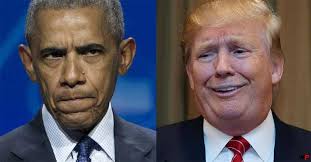 President Barack Obama was irate with Republican Nominee Donald Trump on Tuesday for admiring Russian President Vladimir Putin and appearing on a television network funded by his government.

Speaking at a rally in support of Hillary Clinton, Obama said Trump’s admiration for Putin ― who has been condemned by leaders across the globe for violating human rights, disregarding international law and silencing dissenters ― is a major departure from the rest of the Republican Party.

“Just last week, Mr. Trump went on Russian television to talk down our military and to favor with Vladimir Putin. He loves this guy,” Obama told the crowd in Philadelphia.

“Think about what’s happening to the Republican Party,” he continued. “They used to be opposed to Russia and authoritarianism… And now their nominee is out there praising a guy, saying he’s a strong leader because he invades smaller countries, jails his opponents or threats, controls the press and drives his economy into a long recession.”

Trump has repeatedly lavished praise on Vladimir Putin, and stood by his compliments when asked about them during NBC’s Commander-in-Chief forum last week on television.

“I think when he calls me ‘brilliant,’ I’ll take the compliment,” Trump said.

He also cited Putin’s high approval ratings, which Obama mocked at the rally.

“If you control the media and you’ve taken away everybody’s civil liberties and you jail dissidents, that’s what happens,” Obama said. “The pollster calls you up and says, do you support the guy who if you don’t support him he might throw you in jail, you say, ‘Yes, I love that guy.’”

Hillary Clinton has also criticized Trump for his remarks by saying her GOP opponent is “throwing his lot in with” Putin.

“It is beyond one’s imagination to have a candidate for president praising a Russian autocrat like Vladimir Putin,” she said last week.

When it comes to ransomware, you don't always get … END_OF_DOCUMENT_TOKEN_TO_BE_REPLACED

Peyton Carr is a financial advisor to founders, … END_OF_DOCUMENT_TOKEN_TO_BE_REPLACED