Scores of fans assembled in the bleachers overlooking the fields while waiting for the Giants’ training camp practice to start Thursday night. The children in the crowd, often accompanied by their parents, gathered behind the grandstands, throwing footballs back and forth.

Most passes were not being caught, though not for a lack of coordination. It was more related to a new phenomenon, something that might be termed a Beckhamism.

In 2015, many people of all ages who play catch — and that includes N.F.L. players tossing a ball to each other — now routinely feel obliged to try to catch the ball with only one hand. Not surprisingly, the one-handed attempts have a low rate of success.

But that is hardly the point. Why use two hands if you can emulate the incandescent Odell Beckham Jr., the Giants wide receiver who rocketed to fame with an unforgettable one-handed catch in the end zone last year against the Dallas Cowboys?

It was the catch of the season and is considered by some to be the greatest catch of all time. 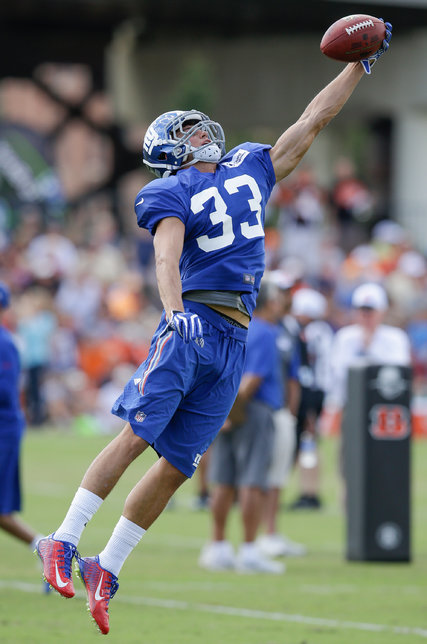 Now, before every game or practice, there is a game within the game. It has a familiar ring to it: Grab it like Beckham.

“It’s way more cool to see if you can do what Odell did,” said Joseph Miller, 13, of Nutley, N.J., who wore a Beckham jersey as he attended Giants practice with his family. “It’s kind of almost impossible, but once in a while you do it, and that’s the fun part.”

As practice was about to begin Thursday, the new world of one-handed pass catching was on full display during warm-ups. Beckham was catching passes with one hand — either hand, by the way — as simply and effortlessly as someone plucking a potato chip from a serving bowl. Sometimes Beckham also catches punts one-handed, snatching the ball out of the air as it hurtles toward the ground from a height of more than 70 feet.

Around Beckham, other players tried to match the wizardry of their teammate, who graces the cover of the Madden 16 video game. Several wide receivers and running backs were proficient at it, but they could not match the flair Beckham seemed to bring to the exercise.

Still, Giants players were making a lot of one-handed catches Thursday — certainly a lot more than their fans behind the bleachers did. Then again, the fans were not wearing gloves, and the professionals typically each receive multiple pairs of $100 tacky, high-tech gloves at no charge.

Throughout the preseason, the players have turned the one-hand catching routine into a playful competition. So, too, have the fans behind the bleachers.

But let’s face it: All this one-handed catching usually leads to a lot of one-handed dropping. And that has not gone unnoticed by another football constituency, one that is unimpressed with the panache of a one-handed grab of a spherical object spiraling through the sky.

“I’m not in favor of it; I would like to see two hands on the ball,” the Giants’ offensive coordinator, Ben McAdoo, said Wednesday when asked what he thought about one-handed catches.

“Guys are always out there trying to work on catching the ball with one hand, whether it’s pregame, pre-practice,” McAdoo continued. “They’re challenging each other. I don’t know if there’s anything wrong with that, but in a game situation, you’d like to see guys catch the ball with two hands out in front of their eyes.”

So McAdoo was not sure if there was anything wrong with it. That does not mean he thinks there is any real benefit to it.

This month, Beckham, running full speed down the sideline, made a nifty one-handed catch in training camp, and Giants Coach Tom Coughlin was asked about the play afterward.

Beckham’s teammates do not appear to mind the show.

“That guy can catch anything you throw at him with one hand pretty much at this point,” said Victor Cruz, who was the Giants’ best-known receiver until Beckham made his debut a year ago.

Cruz has tried a variety of one-handed catches himself in the pre-practice periods. But he has not matched Beckham’s proficiency. Cruz marvels at Beckham, despite pretending to mock him in a new Foot Locker commercial.

“Who knows, maybe one day Odell will be catching slants with one hand and hitches with one hand,” Cruz said, describing two particularly quick and difficult pass patterns. “It’ll just be remarkable.”

Cruz was aware of Coughlin’s comments about getting two hands on the ball.

“Coach is old-school,” Cruz said, laughing. “If we had an extra hand to put on the ball, he’d want three hands on it.”

But the phenomenon is showing no signs of abating. Other N.F.L. teams, in fact, are not letting Beckham have all the fun. And they do not seem to mind the one-handed catching either.

The Houston Texans recently posted a video on Twitter of J. J. Watt catching passes with one hand. The video, which included slow-motion replays, was filmed from behind the machine that was firing the footballs at Watt. He made catch after catch. With one hand.

Beckham, the man largely responsible for all this, does not know what to say about what has transpired since Nov. 23, when he leapt, arched backward, twisted and stopped the momentum of a ball traveling an estimated 45 miles an hour with three fingers of his right hand, pulling it back to his chest for a touchdown even as he was interfered with.

“I’ve been practicing one-handed catches for a lot of years now,” Beckham said. “It’s just a fun thing I started doing with friends.”

Beckham shrugged his shoulders. “It’s just something I do,” he said. “I don’t think about it. It’s not even something I’m trying to figure out.”

Everyone else is doing that for him.

When it comes to ransomware, you don't always get … END_OF_DOCUMENT_TOKEN_TO_BE_REPLACED

Peyton Carr is a financial advisor to founders, … END_OF_DOCUMENT_TOKEN_TO_BE_REPLACED