You are here: Home / Featured / On Tennis: Signature Moment Has Eluded This Generation of Musketeers 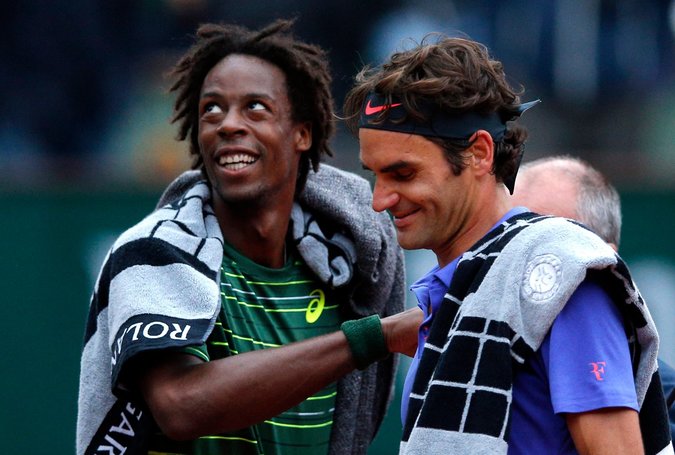 PARIS. After Monfils slammed a backhand winner down the line on Sunday night, Monfils and Roger Federer shook hands. But their fourth-round duel at the French Open is far from over. Having split the first two sets, they were simply calling it a night because of fading light that was making it a challenge to see anything but Federer’s Day-Glo shorts.

What did remain clear, as everyone trudged off the red clay in the gloaming, was that Monfils and his fine French generation are running out of time.

Monfils, Simon, Jo-Wilfried Tsonga and Richard Gasquet have long been referred to here as the new Musketeers. That is an ode to the four amateurs Ren Lacoste, Henri Cochet, Jean Borotra and Jacques Brugnon, who put tennis and Roland Garros Stadium on the French map nearly a century ago by winning the Davis Cup.

Their breakthrough victory in 1927 was the impetus for the construction of Roland Garros, the current site of the French Open, which was finished in a hurry for a defense of the Cup in 1928.

Monfils and the new Musketeers have won plenty of matches, cashed plenty of checks, entertained millions and become stars â though not quite megastars â in their home country â which is not, it must be said, their country of residence. (They all live officially in Switzerland, largely for financial reasons.)

What the new Musketeers have not done is win a Grand Slam singles title or the Davis Cup. They lost last year in the final of the Cup, the gameâs premier team competition, to Federer, Stan Wawrinka and the Swiss on indoor clay in Lille, in northern France.

That same Swiss pair was back on French territory to bedevil their hosts on this intermittently rainy Sunday, with Wawrinka eliminating Simon, 6-1, 6-4, 6-2, in the fourth round. Wawrinka, who was greeted with a few boos from French fans as he walked on court, did not appear intimidating. With his bedhead and what looked like boxer shorts, he appeared as if it would have been more appropriate had he been carrying a toothbrush instead of a racket.

But on a day when playing conditions were heavy, Wawrinka had ample strength to drive his marvelous, percussive one-handed backhand past the usually more dangerous Simon.

Now for the better local news. There are still four Frenchman in the singles: Monfils, Gasquet, Tsonga and Chardy.

In the fourth round on Monday, weather willing, Monfils will finish with Federer, Gasquet will play the top-seeded Novak Djokovic, and Chardy will face No. 3 seed Andy Murray. Tsonga is already into the quarterfinals after defeating Tomas Berdych, 6-3, 6-2, 6-7 (5), 6-3, on Sunday.

Based on the strength of the opposition, Tsonga could soon be a solo act. He remains the only one of his French generation to have reached a Grand Slam singles final, and it came early, at the 2008 Australian Open, where Djokovic won his first major title.

Djokovic has gone on to greater things. Tsonga and France are still waiting. At 30, Tsonga remains a sotto voce charmer in the right frame of mind, but he can also strike a defensive crouch â all the more so since the disappointment of the Davis Cup final, in which he lost to Wawrinka on Day 1 and then pulled out of the doubles and the final dayâs singles, citing a lingering arm injury. He soon decided to play in a big-money team tennis league in India, a scheduling move that did not go unnoticed or uncriticized in France.

Did he feel on Sunday that he was putting an end to six or seven tough months?

“No,” Tsonga answered. “Because I think I’ve had difficulties for the last 15 years. Today, I’m following my path. I know when I play my best tennis I’m capable of beating these guys. But I haven’t pulled off the exploit of the century, either. Iâm into my tournament. I won four matches. VoilÃ . I will continue to do what I have to do, do it the best I can and see where it leads.”

That all sounds eminently reasonable, but it will still feel like a collective underachievement if none of the new Musketeers manages a big breakthrough before they all ride off into the Swiss Alps.

There are caveats, of course, chief among them the enduring excellence of Federer, Rafael Nadal, Djokovic and Murray, who have hoarded the hardware in this era.

“Statistically, there has never been a time in professional tennis when four guys were dominating that much, and I’m talking about Grand Slams and Masters Series,” De Witt said. “You really have to take that into consideration. There’s no way around that.”

But if Wawrinka and Marin Cilic can win Grand Slam singles titles, as they did last year, why not Monfils or Tsonga?

Monfils, in particular, remains intriguing at this stage. He is still just 28: prime time for greatness in an age when there were six players 30 or older in the fourth round of this tournament.

Hiring De Witt, a German who is deeply committed to analytics and rigor, could create a new dynamic. For now, Monfils continues to be viewed by many in tennis as an outrageously talented underachiever, capable of turning too many routine matches into epics but also capable of showtime brilliance.

If any Musketeer can beat the odds and the Big Four ogres, and parry and thrust his way to the crown jewels, Monfils seems the most likely candidate.

“If this in the end is enough to win the big thing, I don’t know. But I believe he has it in him, and my job is to push him every single day to get closer to his limits on the normal days, not on the big days. On the big day, he’s great anyway. But on the normal days, when it’s a question of do we practice two hours more or we don’t, that is one of the main things.”

The main thing for the moment is to get past Federer, whom Monfils routed on clay in the Davis Cup final but failed to put away in the United States Open quarterfinals last year despite holding a two-set lead and two match points.

De Witt said he was happy for Sunday night’s intermission here because, he said, Monfils was fighting a cold as well as Federer.

“For us it was good that it stopped when it stopped,” De Witt said.

For now, and perhaps quite a while longer, the last Frenchman to win a major singles title remains Yannick Noah, who won the French Open in 1983 and long ago grew weary of being trotted out every spring.

But Noah, now a popular singer and the father of the N.B.A. player Joakim Noah, was more visible than usual this year: recording a series of short television spots for French television reflecting on his cathartic, dreadlocked victory.

More constructively, he made an appearance at Roland Garros in the first week to help advise one of France’s rare very promising next-generation men’s players: Lucas Pouille.

Pouille, 21, lost in the first round.

“We know we’re going to have a bit more of a down period coming than we’ve experienced in these last years,” Gilbert Ysern, the general director of the French Tennis Federation, said in an interview before the French Open.

All the more reason then for the Musketeers to swashbuckle their way to a big prize, just one would do before it’s too late.

When it comes to ransomware, you don't always get … END_OF_DOCUMENT_TOKEN_TO_BE_REPLACED

Peyton Carr is a financial advisor to founders, … END_OF_DOCUMENT_TOKEN_TO_BE_REPLACED