You are here: Home / Science / One Neighboring Galaxy Is a Bright Smear Across Space 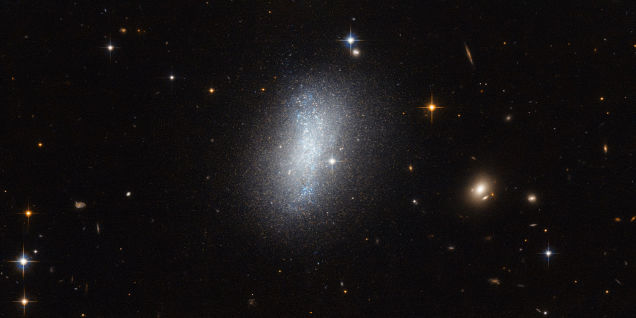 The sphere surrounding the Milky Way is called the Local Volume, and it is 35 million lightyears in diameter. In the Local Volume is PGC 18431, a galaxy the Hubble caught as part of a mission to figure out how galaxies cluster and move.

Hubble’s high resolution allows astronomers to explore star populations within these moderately distant galaxies — specifically, stars known as tip of the red giant branch stars — in order to get an idea of the galaxy’s composition and, crucially, its distance from us. Knowing galactic distances enables us to accurately map a galaxy sample in three dimensions, a method key to understanding more about our cosmic neighbors, and to dismiss perspective and line-of-sight illusions.

When it comes to ransomware, you don't always get … END_OF_DOCUMENT_TOKEN_TO_BE_REPLACED

Peyton Carr is a financial advisor to founders, … END_OF_DOCUMENT_TOKEN_TO_BE_REPLACED