You are here: Home / World / One Year Later in Ferguson, No Lessons Learned 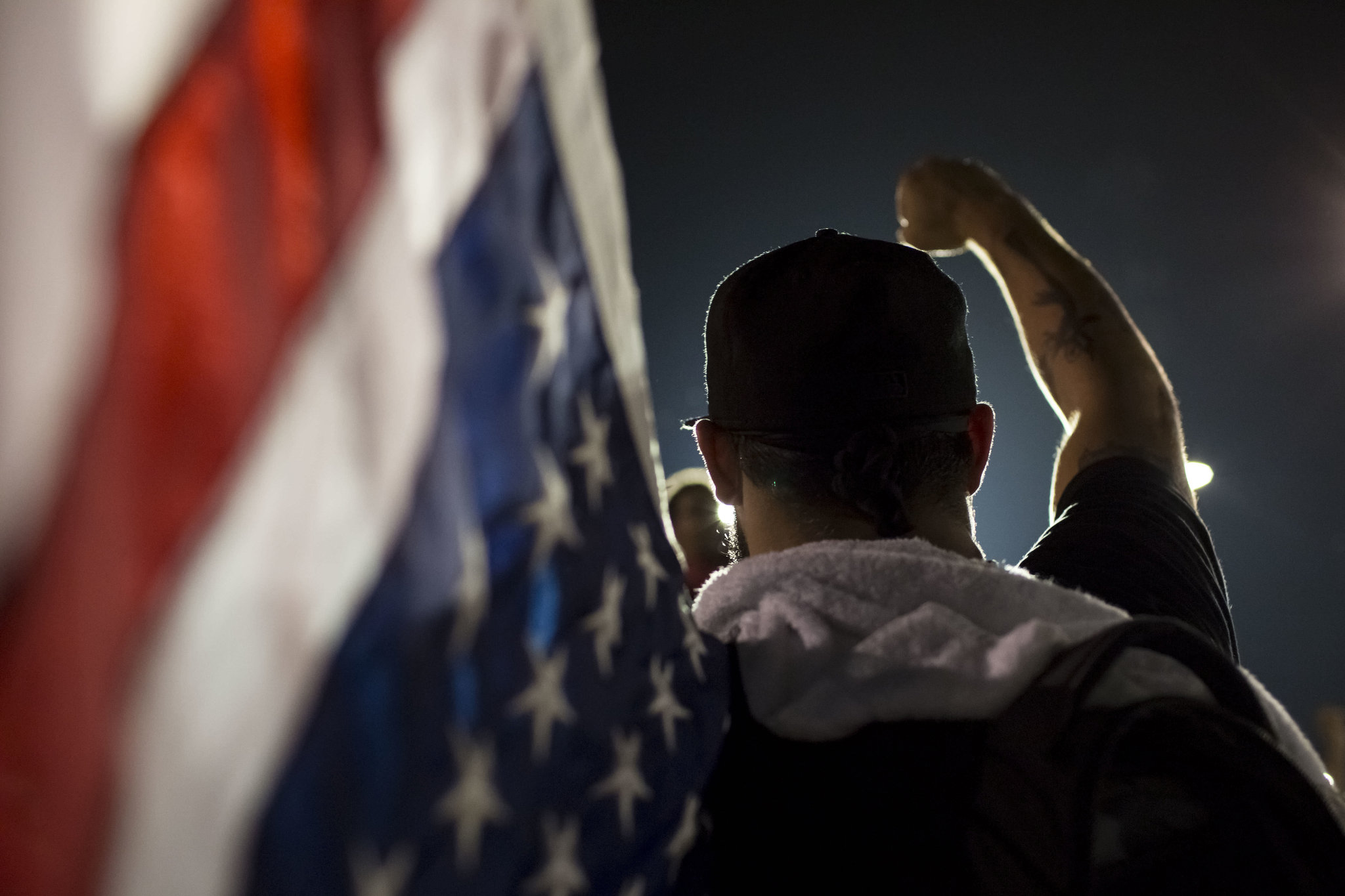 A day of peaceful protest commemorating the killing of Michael Brown, an unarmed black 18 year-old, by a white police officer one year ago ended in gunfire late Sunday as multiple shots rang out on West Florissant Avenue, the commercial district hit by rioting last summer.

A St. Louis County police officer was involved in the shooting, which occurred at about 11:15 p.m., after coming under heavy gunfire, the department said in a post on Twitter. Another department post said, “At least 2 unmarked cars took shots.”

About 100 people who had been milling about in the street scattered, seeking cover behind cars. Police officers sought protection behind their riot shields and drew their weapons. The streets cleared as an eerie silence took hold, the only sound coming from a helicopter overhead. There was no immediate word from the police on injuries.

The event during the day drew a range of political leaders, national activists and ordinary people who said they felt a connection to the events of a year ago. With the writer and academic Cornel West behind them, Mr. Brown’s family stood over the freshly repaved patch of Canfield Drive where Mr. Brown died. Relatives of Eric Garner and Oscar Grant, two other black men who died in confrontations with the police in Staten Island and in Oakland, Calif., also attended.

A year after the death of Michael Brown, protesters marched in Ferguson to mark the anniversary of the shooting of the black teenager by a white police officer.

Assembled around a makeshift memorial of colorful stuffed animals, several activists urged the crowd not to let Mr. Brown’s death be in vain. They held a four-and-a-half-minute moment of silence — symbolic of the four and a half hours that Mr. Brown’s body was left in the street after the shooting — and then marched a mile and a half through the muggy air to a local church for a service.

“They didn’t give us no justice, so they ain’t going to get no peace,” Bud Cuzz, the leader of an activist group, Lost Voices, told the crowd on Canfield Drive to boisterous cheers.

Darren Wilson, the officer who shot Mr. Brown and has since resigned from the Ferguson police force, was cleared of criminal wrongdoing by a local grand jury in November. And while a Justice Department investigation concluded that the city unconstitutionally targeted black people for an array of fees and fines largely intended to raise revenue, it also concluded that the shooting did not warrant criminal charges.

But people here spoke of the need to overhaul the system, calling for an end to racism and what they see as the unfair treatment of blacks by the police. They invoked the names of other blacks killed by the police. They demanded that national politicians address the grievances of blacks. They called for a national day of resistance on Monday through acts of civil disobedience.

“Every city, I want us to close it down!” Anthony Shahid, a local activist, screamed into a microphone before leading the crowd in a chant, “If we can’t get it, shut it down.”

Throughout the weekend, protesters and activists held rallies and vigils remembering Mr. Brown and others who were killed by the police or who died in custody in cities around the world.
In New York, protesters gathered on Sunday at the Barclays Center in Brooklyn and at a government building in Harlem before a planned vigil in Manhattan’s Union Square. Two people were arrested during a demonstration that blocked traffic near Brooklyn’s Fulton Mall.

In Ypsilanti, Mich., demonstrators gathered at a library park for a rally demanding an end to racial injustice. Similar demonstrations took place in Pittsburgh and at Harvard Square in Cambridge, Mass. Others were planned for Denver; at the Washington State Capitol in Olympia; at the Waller County Jail in Hempstead, Tex., where Sandra Bland was found dead; and in St. Petersburg, Fla.

In London, demonstrators picketed outside the American Embassy. More demonstrations were planned for Monday in St. Louis and in Philadelphia, where organizers have adopted the hashtag #MoralMonday on social media.

Although things remained peaceful during the day on Sunday, a tension pulsed through the air. Mr. Brown’s killing set off weeks of unrest that included arson fires and looting, and the police responded with tear gas and rubber bullets. As police officers escorted marchers through the streets on Sunday, they seemed determined to appear welcoming. At one point, law enforcement officials asked the marchers to hold up after gunshots rang out a few blocks away in a nonfatal shooting unrelated to the march.

“This is all good right now,” Chief Jon Belmar of the St. Louis County Police Department said as the marchers paused while officers tried to make sure it was safe for them to continue.

But after one of his department’s police cars came racing out of a side street, siren blaring, and turned in the direction of the demonstrators, Chief Belmar became irked. He mumbled an obscenity, looked at some of his officers standing on the side of the road in the distance and twirled his finger in the air, saying, “Turn him around.”

The situation was quickly cleared and the march resumed to the church. The chief said he had himself been reflecting on the day of Mr. Brown’s shooting as he stood on Canfield Drive.

“I’d been a policeman over 28 years when that happened, and I tell people all the time, ‘You think you have all the answers and you think you’re experienced and have seen everything; well, you haven’t,’ ” he said. “Last year’s events serve as a reminder that just about the time you think that you really have a depth of understanding of anything that can happen, you don’t.”

The city of Ferguson, which is about two-thirds black, has taken some steps to address concerns about policies that the Justice Department described as discriminatory. It has hired a black interim city manager and a black interim police chief. It has released city officials who were discovered to have sent racist emails. It has hired a new municipal judge.

On the state level, the Legislature passed a law capping the amount of revenue that cities can collect from traffic tickets, responding to accusations that municipalities were targeting mostly black motorists with unfair fines and fees.

Erica Garner, the daughter of Eric Garner, applauded the activists who climbed on stage with the Democratic presidential candidate Bernie Sanders and demanded an opportunity to talk about police killings during an event in Seattle on Saturday. Mr. Sanders left the event without addressing the crowd.

“We got to hold our elected officials accountable,” Ms. Garner said. “If he’s not going to talk about our issues, he shouldn’t talk at all.”

Belden Lane, a 72 year-old white man, held a sign that read, “These are my sons, too … dying in the streets.”

At one point during the march, Mr. Brown’s father, Michael Brown Sr., said, “This moment was sponsored by Darren Wilson.”

The march ended at Greater St. Mark Family Church, where rap music blared outside before a service that was part somber, part strategy, part fiery.

The Rev. Tommie Pierson, the pastor at Greater St. Mark and a state representative, encouraged people to seek change through the political process.

“If we’re going to change the system to work for us, we need to run for office and vote for ourselves,” Mr. Pierson said. “Protesting is good, but it only brings attention to the problems. Solving the problem requires doing other things.”

When it comes to ransomware, you don't always get … END_OF_DOCUMENT_TOKEN_TO_BE_REPLACED

Peyton Carr is a financial advisor to founders, … END_OF_DOCUMENT_TOKEN_TO_BE_REPLACED