You are here: Home / Featured / Over 120,000 Saiga Antelopes Have Inexplicably Died Since Mid-May 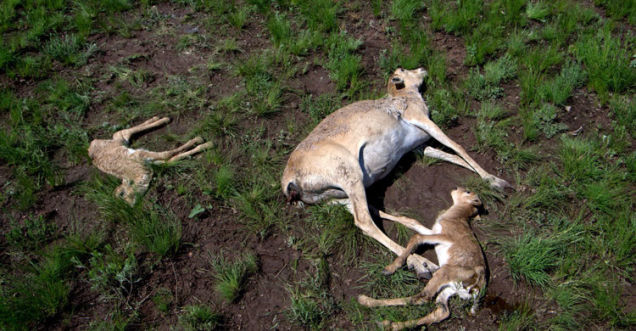 Scientists are trying desperately to understand the cause of a mass die-off that has cut the global population of the critically endangered saiga antelope nearly in half. Saiga antelopes, known for their distinctive flexible proboscises, live in large herds on the steppe grasslands and semi-arid deserts of central Asia. More than 120,000 have died in Kazakhstan over the past several weeks, leaving scientists scrambling to identify a cause.

“This is a major blow for conservation efforts given that saigas have in the past ten years only just started to recover from a global population size of less than 50,000 animals following a 95% crash in numbers,” noted the Convention on the Conservation of Migratory Species of Wild Animals in a statement, adding that “Not a single animal survived in the affected herds.”

Adding insult to injury, the endangered species has also been hit hard by poaching; the saiga’s horns are used in traditional Chinese medicine.

Preliminary analysis suggests that a combination of environmental and biological factors is to blame. Writing in Nature News, Henry Nicholls presents some theories:

Nobody collected detailed data for past events, so there was no way to address this question. But since the 2010 die-off, the Kazakh authorities — assisted by the United Nations’ convention on migratory species and the wider international community — have been strengthening their capacity to collect, process and analyse samples from the field. “We managed to do full necropsies on 50 saiga,” says Kock, who returned from Kazakhstan on 28 May.

The cause is unlikely to have been an infectious agent that was transmitted from one animal to the next. “Epidemiologically, you cannot get a directly transmitted disease to kill a whole population in seven days,” says Kock. “I’d say it’s a polymicrobial disease,” he says. This involves pathogens such as pasteurella and clostridia that are often present in the body but have seized an opportunity to run riot.

The pathogens may have been responsible for the deaths, but something must have caused the saigas to fall victim to them. Given that two discrete sub-populations some 300 kilometres apart suffered similarly and simultaneously, it seems likely that an environmental factor is part of the story.

It appears that this latest die-off episode is over, so there’s still hope the species can recover.

Source: io9 Over 120,000 Saiga Antelopes Have Inexplicably Died Since Mid-May

When it comes to ransomware, you don't always get … END_OF_DOCUMENT_TOKEN_TO_BE_REPLACED

Peyton Carr is a financial advisor to founders, … END_OF_DOCUMENT_TOKEN_TO_BE_REPLACED