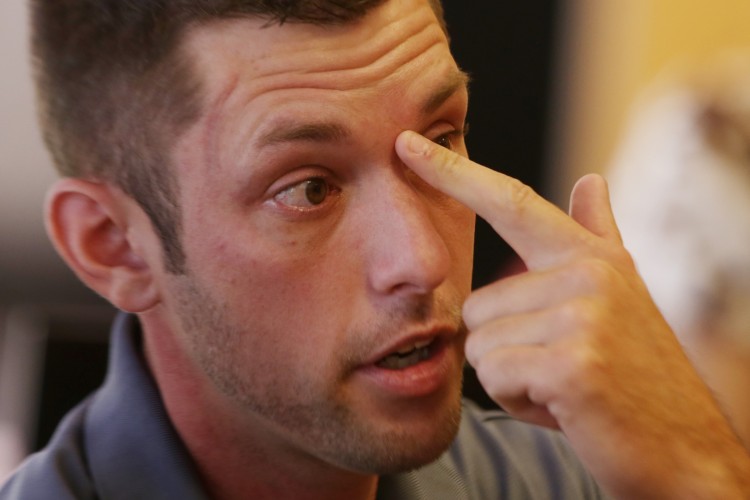 Dabbing tears from his eyes, a Detroit police officer testified Thursday how fellow officers helped pull him away from a woman who slashed his face five times with a rusty razor blade.

Scarred streaks remain visible down the face of Joel Dobis, 31, who had more than 60 stitches and three plastic surgeries before recovering from the Dec. 6 attack. The new hire, who’s been called a hero for stepping in to protect a veteran female officer, was cut on both sides of his face and down the middle, including his upper lip and across the bridge of his nose.

Dobis moved his arm up and down to illustrate how he was slashed.

“I had my hands in my face,” he said, “trying to figure out where all this blood is coming from.”

He testified against Angel Terri Birch, 34, the woman charged with assault with intent to murder, along with six related charges, in connection with the slashing. Birch has since been charged in a separate felony case with one count of assault on a prison employee while incarcerated in the slashing case.

Dobis said he was trying to intervene as the woman spat and lunged at another officer from the doorway of a vacant house on Detroit’s west side. They’d been called to the house that morning on a report of a suspicious person. As she emerged, spouting obscenities, the officer hadn’t noticed the roughly inch-long blade in her hand, he said.

Birch’s attorney, Linda Perkins-Moore, said afterward that Birch has a history of mental illness. She wants Birch evaluated to find whether she knew her actions were right or wrong at the time, in hopes that she could be hospitalized rather than put in prison.

“What she did was tragic, but she does not understand what she did,” Perkins-Moore said.

Before Thursday’s exam, the court had an evaluation conducted that found Birch competent to stand trial. Betty Birch, her grandmother, said she’d been off her medicine used to treat bipolar and schizophrenia when the officer was slashed. Betty Birch said she apologized to Dobis and sent him a package.

The morning of Dec. 6, Dobis and two other officers went to the house and saw the woman inside, asking her to come out. Dobis stood on the opposite side of a door from Officer Robin Hill, 50, who had been on the force nearly two decades.

The woman said, “(Expletive) the police. I’m gonna cut you (expletive),” according to Dobis.

Lunging and spitting, she came within inches of Hill when he jumped in between, Hill previously told the Free Press.

As Dobis on Thursday described the two officers who came to his aid, his eyes watered. He stopped testifying for a moment and used tissues to dab his eyes.

Dobis had worked as an officer three years in Saginaw County before joining the Detroit police force about three months before the incident. He returned to work in Detroit about six months after the slashing.

Officer Marvin Stribling testified that when he saw blood “jumping out of his nose” he pushed Dobis out of the way and forced Birch to the ground. A razor blade flew out of her hand, he said.

Officer Joseph Molinaro, who drove Birch to the detention center, testified briefly on Thursday about how she responded when asked whether she wanted to hurt herself or others.

“Her answer was, she wants to kill a police officer and she almost had one today,” he said.

When it comes to ransomware, you don't always get … END_OF_DOCUMENT_TOKEN_TO_BE_REPLACED

Peyton Carr is a financial advisor to founders, … END_OF_DOCUMENT_TOKEN_TO_BE_REPLACED