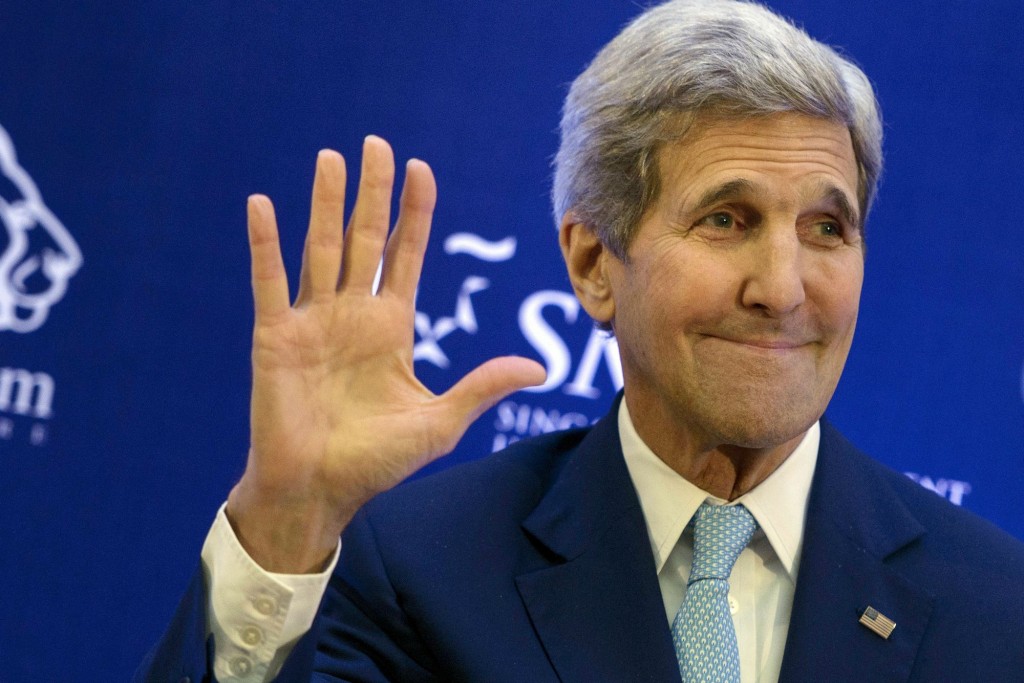 In a recent interview with the Huffington Post, Secretary of State John Kerry defended the Obama administration’s decision to allow Shell to drill for oil in the Arctic, pushing back against claims that such a decision is at odds with the administration’s action on climate change.

“These are leases that were granted some time ago prior to President Obama becoming president,” Kerry told Huffington Post reporter Sam Stein. “So the leases existed, and Shell and other companies are going to be drilling somewhere over the course of these next years, because we’re not going to suddenly be weaned from oil.”

Moving to a de-carbonized economy, Kerry continued, could take up to 40 years. He noted that during that transition the United States would still be dependent on oil to meet some of its energy needs.

“I’d rather have our supply come from an American-controlled source in that respect than somewhere else,” he said, adding that “in the long run, we have to wean ourselves from a carbon-based economy,” and that the country isn’t moving quickly enough toward a carbon-free economy.

“We have to do it much faster than we are right now. I think the president understands that, I understand that. We’re advocating as powerfully as we can,” Kerry said.

Kerry cited Congressional Republicans’ reluctance to act on climate change as a major obstacle toward quickly transitioning toward a carbon-free economy. Without Congress’ support, the administration is forced to enact climate policies through executive action — like the Clean Power Plan — which Kerry said slows the rate of progress.

In the interview, Kerry called reaching an international climate agreement in Paris at the end of this year the next item on his bucket list for his remaining time in office. Calling reaching a deal at the United Nations Climate Change Conference a “very, very important priority for [the administration],” he cited his trip to China two years ago as a critical moment for creating an international climate deal.

“My hope is that this began when I went to China two years ago, and we began to open up the participation with China in a historic agreement with China. And hopefully that comes together to produce something in Paris,” he said. “I mean that’s really critical.”

Kerry’s comments come just days after President Obama concluded his trip to the Arctic, where he spoke candidly on the issue of climate change. During his final stop Wednesday, he spoke to a crowd of more than 1,000 people in the Alaskan village of Kotzebue.

“If another country threatened to wipe out an American town, we’d do everything in our power to protect it,” Obama said. “What’s happening here should be America’s wake-up call. It’s the world’s wake up call.”

Activist Bill McKibben chided the president earlier this week for touting such a strong stance on climate action during his trip to the Arctic, while allowing Shell to drill in the region. Shell has been trying to obtain access to the Arctic for years — in 2012, its first attempt ended in disaster when dangerous ice conditions and equipment failures forced the company to abandon its efforts. Earlier this year, the Obama administration gave Shell the green light to begin drilling up to six wells approximately 70 miles northwest of Wainwright, Alaska in the Chukchi Sea. Environmentalists were outraged, citing Shell’s history of failure in the Arctic, the area’s remote and dangerous conditions, and an analysis by the the Department of Interior’s Bureau of Ocean Energy Management (BOEM) that showed a 75 percent chance of a large-scale oil spill if Shell’s current plans were carried out to completion.

Despite an ongoing chorus of criticism, the Obama administration has defended its decision at every turn. During a May Twitter chat, Obama said that he chose to approve Shell’s proposal because “we can’t prevent oil exploration completely in region,” and that allowing Shell to drill under his administration would ensure that the company followed the highest possibly standards.

Technically, Obama could prevent Shell — or any other oil company — from drilling in the Arctic, either by canceling Shell’s lease or attempting to name the area a marine sanctuary, the aquatic equivalent of a wilderness area. But as Vox’s Dave Roberts argued on Twitter, it might be that allowing Shell to drill in the Arctic really is part of his climate plan: by allowing Shell to drill in the Arctic, he ensures the production of a (cleaner) fossil fuel while supporting policies that ultimately reduce demand for that fuel.

When it comes to ransomware, you don't always get … END_OF_DOCUMENT_TOKEN_TO_BE_REPLACED

Peyton Carr is a financial advisor to founders, … END_OF_DOCUMENT_TOKEN_TO_BE_REPLACED