You are here: Home / Entertainment / Skirting Comedy Limits in Myanmar 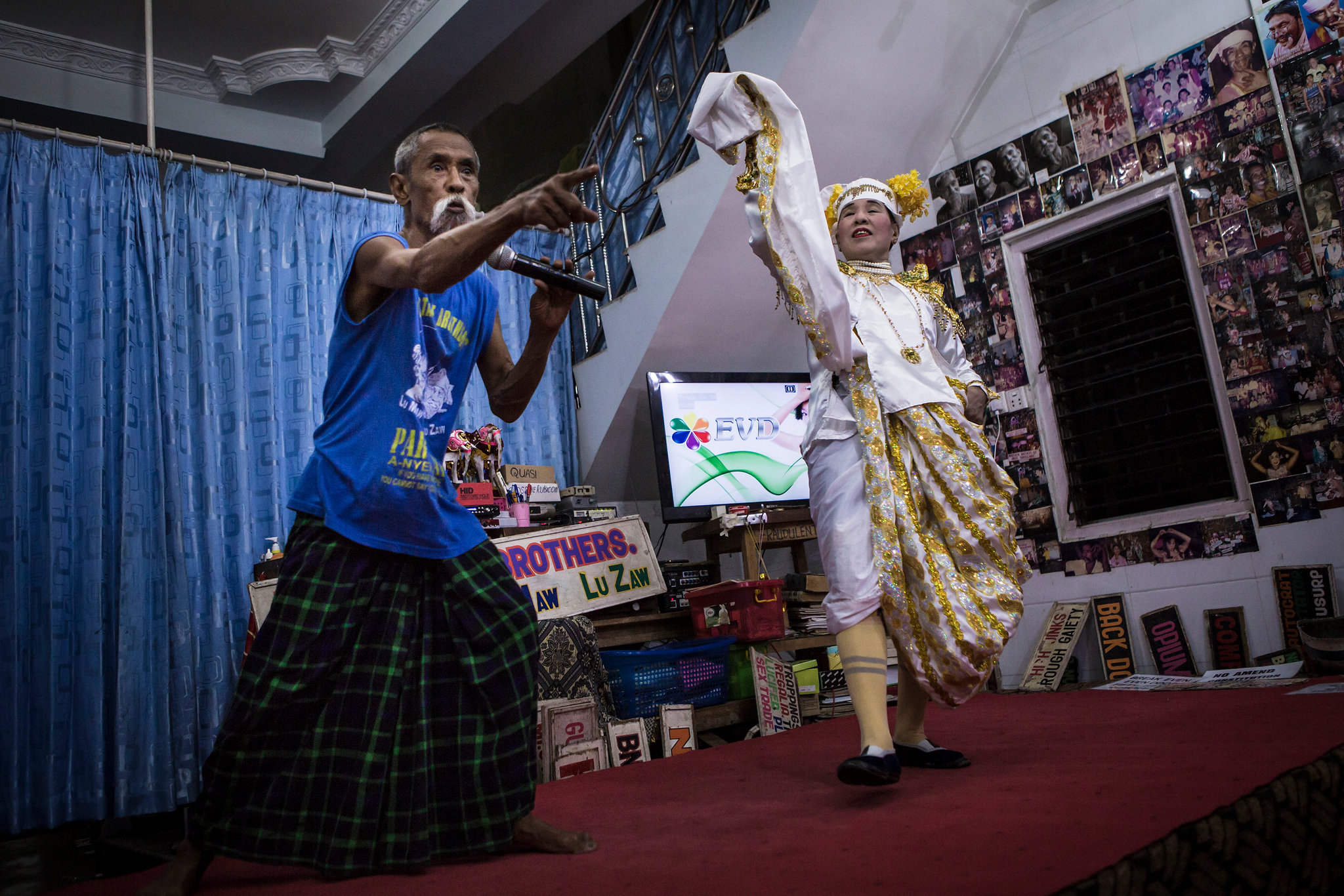 Emerging from behind a tawdry blue curtain in the garage of his three-story home here in Myanmar’s second largest city, U Lu Maw made his way onto a makeshift stage to do what he does best: tell jokes.

“I had a toothache, so I go to the dentist in Thailand,” Mr. Lu Maw, 66, bellowed into the microphone in English one evening last month to an audience of foreigners. “He said, ‘Don’t you have dentists in Burma?’

Though his attire is modest — a traditional wraparound skirt known as a longyi under a red T-shirt emblazoned with “The Moustache Brothers,” the name of his comedy troupe — Mr. Lu Maw delivers jokes that are a dark and bold reminder of what life was like under decades of oppressive military rule in Myanmar, formerly known as Burma.

The group, which has been performing for more than three decades, is renowned in the country for a political satire that can carry a prison sentence if performed in a public venue in Burmese. Since 2001, the troupe’s members have shared their popular comedy act from their garage seven nights a week for gatherings of as many as 40 foreigners, who pay the equivalent of $10 each.

It was jokes like the dentist one that landed two of the three founding performers, U Par Par Lay and his cousin U Lu Zaw, in a hard-labor prison camp for five years in the late 1990s. And the performances have continued even after the death of Mr. Par Par Lay, who was Mr. Lu Maw’s brother and the group’s leader, two years ago.

It was not until 2011 that the military regime, which had jailed an estimated 2,000 political prisoners, was succeeded by a quasi-civilian government determined to open the country. Many of those prisoners have since been released, though as of last month, 169 political prisoners remained incarcerated, with 446 activists awaiting trial, according to the Assistance Association for Political Prisoners, a human rights group in Thailand.

Mr. Par Par Lay was himself a pro-democracy activist and avid supporter of Daw Aung San Suu Kyi, now the country’s opposition leader, and took part in the violent nationwide democratic 1988 uprising before dying in August 2013, at the age of 67. His cause of death was never verified, but Mr. Lu Maw blames a kidney infection caused by years of drinking contaminated water at two prison camps in northern Myanmar.

“My own brother passed away from a government killing, but not only my brother — over 2,000 people died,” he said, referring to Myanmar’s general population of prisoners, which ran into the tens of thousands. Many of them died from prison-related injuries or illnesses. Myanmar’s poor treatment of its political prisoners has for decades drawn sharp criticism from human rights groups and the international community.

When the trio began performing more than three decades ago, comedy troupes like theirs were a regular fixture at celebrations and public events throughout Myanmar. More than 40 touring troupes from Mandalay each employed a mix of apolitical slapstick comedy and traditional dance together known as a-nyeint pwe.

The field of troupes became so oversaturated, however, that Mr. Par Par Lay and Mr. Lu Maw grew mustaches to differentiate themselves and then sought to push the boundaries of a-nyeint pwe even further. During an event in 1996 at the house of Ms. Aung San Suu Kyi for Independence Day, the pair introduced a far riskier brand of political satire to more than 1,000 of her supporters, poking fun at the junta.

“They confirmed the disdain of great parts of the population for the generals and their methods of ruling,” said Franz-Xaver Augustin, the Yangon director of the Goethe-Institut, the German cultural center.

At the show last month, Mr. Lu Maw repeated the brand of humor showcased at the 1996 performance.

“I don’t trust the government,” he told the crowd. “The cronies — they like to take things for free, like Jesse James. It’s the five-finger discount.”

Mr. Lu Zaw, now 64, said that after the 1996 event, later that evening, the military police arrested him and Mr. Par Par Lay.

“I was here in the house when it happened,” he said. “K.G.B. came knocking on the door that night and said ‘follow me,”’ Mr. Lu Zaw said in a jocular tone.

They were sentenced to seven years of hard labor for their act, and the Moustache Brothers were forbidden to perform publicly in Myanmar.

Of his time in the labor camp, Mr. Lu Zaw said, “At nighttime we were all scabby from working, but every day before bed the other inmates asked us to perform for them and show them what we told Suu Kyi.”

When Mr. Lu Zaw and Mr. Par Par Lay were arrested, the Moustache Brothers were so well known as advocates of free speech that their detention provoked an international outcry from rights groups and American entertainers like Bill Maher and Rob Reiner as well as a petition by the cosmetics retailer Body Shop that produced three million signatures.

Partly as a result of those efforts, the sentence was commuted to five years and seven months, and in July 2001 the two rejoined Mr. Lu Maw and began performing every night from their home to skirt the ban on performing for the general public.

Without a change at the helm of government, the risks were high. Still, they refused to back down. Even though police officers were stationed outside the house, “the tourists and journalists continued coming,” Mr. Lu Zaw said, explaining that the presence of a foreign audience probably prevents the authorities from cracking down again.

Now, on the second anniversary since the death of Mr. Par Par Lay, the troupe is made up of the two surviving members, their wives and five other relatives. Their determination to continue defying the government, they said, is in part a tribute to their lost brother, and today they perform an updated version of the very jokes that Mr. Par Par Lay created and still play well in a country where the military remains in control.

“Before shows, I am very sad in my heart,” Mr. Lu Zaw said before the June performance. “When I start to perform though, I have to change my face. Now, I talk about my brother’s story and I have to put on a smile. I have to be strong.”

Most other comedy troupes in Myanmar have long since disbanded as performers struggle to make a living. Today, fewer than five remain, Mr. Lu Maw said.

“The tourists demand us, so we cannot stop,” he said. “My life depends on them and that’s why I cannot leave them.”

Mr. Lu Zaw and Mr. Lu Maw consider their work a calling and plan to continue it for the rest of their lives, or at least as long as they can keep performing.

When it comes to ransomware, you don't always get … END_OF_DOCUMENT_TOKEN_TO_BE_REPLACED

Peyton Carr is a financial advisor to founders, … END_OF_DOCUMENT_TOKEN_TO_BE_REPLACED