You are here: Home / Featured / SNORT Is Where NASA Engineers Destroy Next-Generation Parachutes 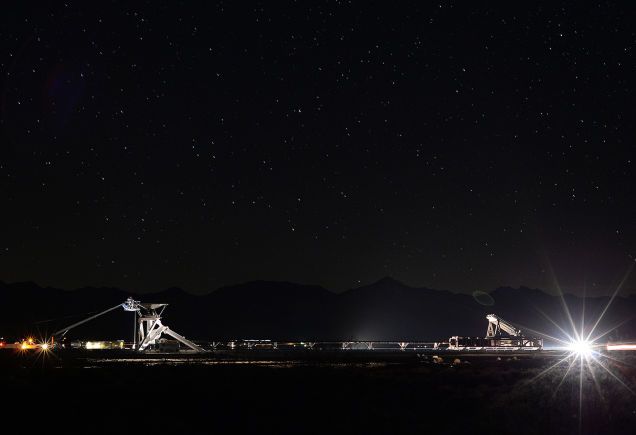 The fantastically-named Supersonic Naval Ordnance Research Track, or SNORT, is a naval facility in the heart of the Californian desert. It’s also where NASA engineers let their evil side run free by wreacking havoc on innocent objects, using a rocket sled to destroy prototype parachutes destined for Mars.

We’ve been using the same basic parachute technology to land robots on Mars since the Viking era. In order to land bigger and bigger payloads, we need to upgrade our current initial parachute system used to slow incoming robots as they burn through the thin atmosphere. We also need to upgrade the landing systems if we ever want to drop a payload at higher elevations like mountains, volcanoes, or the high-elevation southern plains. To address this challenge, NASA engineers are developing the Low-Density Supersonic Decelerator (LDSD), a rocket-powered flying saucer complete with an inflatable diameter-increasing donut and a massive parachute.

The system is designed so the donut inflates first, slowing the vehicle from over Mach 3.5 to Mach 2, at which point the parachute deploys and further slows the payload to subsonic speeds. The 30.5 meter (100 feet) diameter parachute is the largest supersonic parachute ever designed. At 740 square meters (8,000 square feet) of synthetic fiber and ripstop nylon, it is more than twice the size of the Viking-era parachutes most recently used to deliver the Curiosity rover to Mars.

During the first field test in Hawaii in June 2014, the donut worked great, but the parachute didn’t behave as expected, shredding during the test flight when deploying at 3,200 kilometers per hour (2,000 mph). In the post-test debrief, Principle Investigator for LDSD project Ian Clark explained:

“The parachute was moving and inflating faster than we ever thought possible. Suspension lines were all over the place. There was canopy asymmetry, parts of the envelope trying to inflate inside out, and holes starting and propagating wherever you looked. There was so much going on in that video in all sorts of gory detail that we did not understand. We quickly realized to solve this thing we were going to need all the help we could get. If I had a Bat-Signal I would have used it.”

The first field test was meant to test just the donut so the parachute’s failure wasn’t a critical problem, but it does mean the project engineers have a lot of work to do to understand what went wrong before the next round of field testing this summer. Clark was distinctly optimistic about the earlier failure:

“That test was such a blessing to this program. We got an early look at the parachute we were going to test in 2015 and found we needed to go back and rethink everything we thought we knew about supersonic parachute inflation.”

Determined to harness as much knowledge as possible, he rounded up global experts in SCOPE, the Supreme Council of Parachute Experts. In classic fashion, they all denied expertise to Clark:

“There is an old saying in the parachute community — the only parachute expert is the person who admits there is no such thing as a parachute expert,” said Clark. “It was pretty funny to hear that come from some of the people I called. Here they were, with 40 to 50 years of parachute experience, saying they were no expert. Well, they may be no experts but still they are the most knowledgeable in the world.”

After harnessing the council, the parachute was full redesigned. It was stronger and with a more curved crown to hopefully survive the shock of first snapping open in supersonic wind. In the lead-up to the second round of testing scheduled for this week, the engineers rigged up rocket sleds at China Lake push the new version of the Supersonic Disk Sail Parachute to its limits and beyond.

NASA engineers have every intention of beating the ever-living crap out of this parachute by any means necessary. Image credit: NASA
To beat the ever-living daylight out of innocent inanimate objects destined for Mars, SNORT designed an entirely-new test system just for the LSDS project employing everything from helicopters to rocket sleds.

The basic test sequence is that the packed parachute is lifted to altitude by a helicopter while attached to a tow rope and a chunk of ballast (a “bullet”). The parachute is dropped, and the bullet falls into a funnel. Once the bullet locks into place, it engages a pair of rocket engines on the sled, then another pair, yanking the parachute to full-load within seconds of being dropped.

Everything about the test design reads like a variation of “If you give a mouse a cookie, it’s going to want a glass of milk.” The pulley yanking on the parachute needs to withstand 90,700 kilograms of force (200,000 pounds of force), which means it needs a massive tripod with 30-centimeter (12-inch) square beams spanning 12 meters (40 feet), which in turn needs to be anchored by 52 thick bolts to a massive block foundation constructed from over 907,000 kilograms (2 million pounds) of concrete. The carry-on effects of needing to modify every part of the setup to accommodate the massive forces involved doesn’t stop there:

Any slack in the pulley system would be catastrophic, snagging or snatching at inopportune moments, so the tow rope also needed its own hydraulic winch. That one was smaller only by comparison, capable of pulling with nearly 160 kilograms of force (350 pounds of force) at 160 kilometers per hour (100 mph).

The rocket motors can be tiled up or down to tune how much force is exerted on the parachutes, allowing for the most fine-tuned of tests.
To keep constant tension on the tow rope while moderating acceleration and deceleration on the sled, concrete ballast blocks were mounted onto the sled to bring the total weight up to 61,000 kilograms (136,000 pounds).

Rocket motors are hot, hungry beasts with flaming jets licking out great distances to endanger delicate ropes, so the sled has a 36 meter (120 foot) long tow bar to keep the rope at a comfortable distance.

The best part of this completely bonkers system is that it works. During a test in October 2014, the team harnessed a Navy Seahawk helicopter, a rocket sled with four solid rocket motors capable of producing a total of 127,000 kilograms (280,000 pounds) of thrust, a 300-horsepower winch, and nearly 1,200 meters (4,000 feet) of rope in order to torment the parachute to its breaking point.

The test starts by the helicopter lifting the packed parachute, rope trail, and a chunk of ballast (the “bullet”) to 1,200 meters (4,000 feet) altitude, then dropping it. The winch slams into action, yanking the rope down at 24 kilometers per hour (15 mph) as the parachute inflates. As the whole packet descends, the bullet gets funnelled into a latching mechanism on the rocket sled, slamming it into action with two rocket motors firing up to produce 32,000 kilograms (70,000 pounds) of thrust. Seconds later, the next pair of rockets kick in, applying the full load to the parachute canopy within seconds from the helicopter releasing the load.

Tests like these are where the sandcastle-stomping, explosives-loving, destructive child inside every engineer comes out to play. During the lead-up to the 1-1B test sequence in October, LDSD project manager Mark Adler gleefully explained:

“Whenever you get to see a rocket sled in action, that is a good day. When you watch the sled rip apart something you worked very hard in creating, and be happy about it, that is a great day.
Our parachute has a not-to-exceed load during normal operations of 80,000 pound-force of pull. Then there is another load rating well beyond that, where we expect the chute to fail. That is 120,000 pounds-force of pull. Well, to ensure we get to see how the chute fails and at what load, we configured the sled so it can get up to 162,000 pounds-force of pull when all the rockets kick in.

The details of the failure will be used to calibrate our models, and if the failure is earlier or in a different place than expected, we will address that in the parachute design before our supersonic flights this coming summer.

This is going to be fun. Basically, we are going to watch this test with every instrument we can get our hands on and then watch the parachute be destroyed. Then we will apply what we learn to our future parachutes.”

Months later, the rocket sled test results have been thoroughly reviewed and it looks good. But, we won’t know for certain how it worked until it drops in the skies above Hawaii again for another round of field testing. Even so, Clark’s standards for success during this week’s prototype test are modest:

“As long as our chute opens to the point where the canopy is fully inflated, and I think we will do that, we will have learned something valuable. After that, it is just take it as it comes. The physics involved is so cutting edge, we learn something profound every time we test.”

Originally scheduled for June 2nd and rescheduled for every day since then, the test flight for the prototype keeps being thwarted by waves and weather. The next launch attempt under consideration is the morning of Saturday, June 6, 2015. The launch window for this round of testing closes on June 12th.

When it comes to ransomware, you don't always get … END_OF_DOCUMENT_TOKEN_TO_BE_REPLACED

Peyton Carr is a financial advisor to founders, … END_OF_DOCUMENT_TOKEN_TO_BE_REPLACED