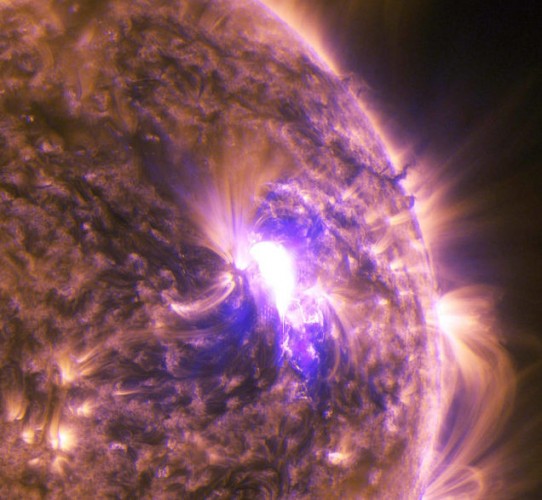 NASA’s Solar Dynamics Observatory captured an image of a mid-level solar flare that pealed at 4:16 EDT this morning. It comes from the sunspot group that’s been flaring up since it was spotted.

Today’s flare was classified as an M7.9, M-classes being one tenth the size of X-class flares, the most intense. Luckily, (or unluckily, if you love seeing pictures of intense auroras) this flare won’t have nearly the effect of the G4 geomagnetic storm of earlier this week.

The Space Weather Prediction Center says that the flare will hit Earth Saturday around 1 p.m. EDT, with an G2 electromagnetic storm — the second weakest of the five levels of severity. The advisory for the storm starts on the 27 and lasts into the 28.

Here’s another set of images of the flare, taken 45 minutes apart, showing the ejection traveling 2.5 miles in that short period of time.

When it comes to ransomware, you don't always get … END_OF_DOCUMENT_TOKEN_TO_BE_REPLACED

Peyton Carr is a financial advisor to founders, … END_OF_DOCUMENT_TOKEN_TO_BE_REPLACED