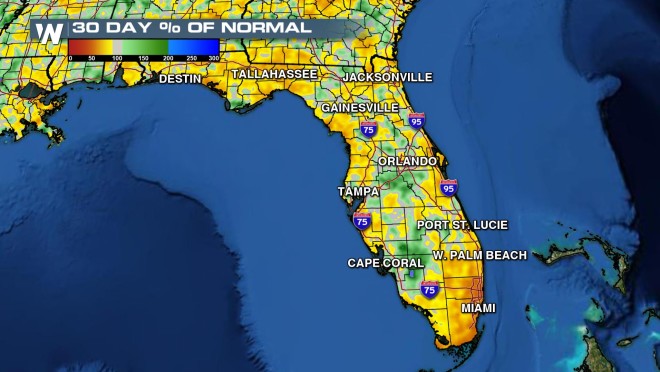 In Miami and Fort Lauderdale, Florida, rain deficits were drastic during the month of June, enhancing what has already been an unusually dry start to 2015 in south Florida.

Unfortunately for dry Florida, the 30-day Climate Prediction Center outlook puts Florida in the heart of the center’s anticipated below average precipitation zone, potentially leading to a worsening of existing drought conditions. Much of Dade and Broward Counties, including Miami and Fort Lauderdale, are now in a “severe” drought, as determined the the United States Drought Monitor.

A large dome of high pressure parked over the Southeast for much of June, deflecting most moisture around the low (which also contributed to scorching temperatures across the Southeast for much of the month as well), leaving Florida, for the most part, high and dry. An anticipated below-average hurricane season, in all likelihood due to El Nino, likely will keep downpours from tropical systems at a minimum this summer and early fall.

But while parts of the Southeast are dry, further north, a wet June made headlines across the Northeast. Baltimore, Maryland recorded its wettest June on record with 13.09″ of rainfall, almost a full 10 inches about average, and much of the Northeast and Midwest saw well above average rainfall amounts during the month.

Stay with WeatherNation for all the latest on Florida’s drought and rain chances over the next few days.

When it comes to ransomware, you don't always get … END_OF_DOCUMENT_TOKEN_TO_BE_REPLACED

Peyton Carr is a financial advisor to founders, … END_OF_DOCUMENT_TOKEN_TO_BE_REPLACED