You are here: Home / Entertainment / The 13 Strangest Deities in Dungeons & Dragons 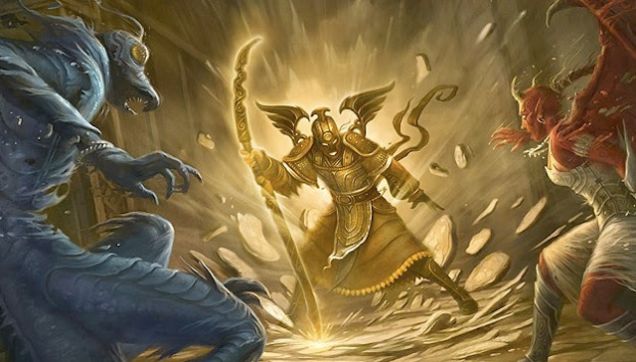 Every fantasy land needs a fantasy religion for the locals to believe in. When you have a fantasy setting as sprawling as D&D, that means various peoples, races, and even monsters pray to countless gods and goddesses. Here’s a baker’s dozen of the most bizarre divinities your players can worship.

1) Hextor
Hextor is a god of war, which makes him a pretty major player in the D&D pantheon. Many of his other domains fall in the same spectrum, like discord, conflict and massacres. However, he’s also the god of tyranny… and fitness. Hey, I hate exercise as much as the next guy, but I find it strange that if I want to get into shape I need to pray to the same deity tyrants pray to when they need help oppressing their subjects.

2) Erythnul
Standard god of evil stuff like hate, envy, malice and slaughter, which is somehow different from massacres, which is of course Hextor’s domain. I imagine it can get pretty tricky deciding whether you’re going to massacre somebody or slaughter them, which makes it difficult to know who to pray to. Erythnul is also the god of ugliness, which seems like a very weird thing to pray for. Do you ask Erythnul to impart ugliness on others? If you’re ugly, do you pray to him to keep you ugly? What if you’re attractive, but just have really low self-esteem?

3) Karaan
It’s the werewolf god! Everybody has to have a god, and since in D&D lycanthropy doesn’t have to be a horrible curse — there can be an entire race of werewolves, or there can be noble werewolves — they’d certainly need someone to pray to. Karaan is also the god of wild savagery, which makes a certain amount of sense, and urban decay, I presume because if you’re a werewolf you generally prefer nature to cities and want them all to go to hell. Strangely, Karaan is also the god of cannibalism, which seems like a domain that was assigned to him when he missed a meeting or something. I can’t imagine the werewolves are particularly happy about this, because it’s not like lycanthropy makes them suddenly want to eat humans. Plus, this means somewhere, there’s an actual cannibal praying to Karaan to help him be the best cannibal he can be, and that’s ridiculous.

4) Evening Glory
The goddess of love, beauty, and the seemingly unrelated “immortality through undeath.” I mention her mostly because her name is Evening Glory, which even the other gods must find preposterously obnoxious.

5) Fenmarel Mestarine
This minor Elvish deity is the god of the wild elves, who are differ from the other races of elves because they eschew civilization. As such, Fenmarel is also the god of isolation, which makes sense as wild elves seldom want anything to do with anybody, and outcasts, which is a little weird, because wild elves weren’t thrown out of society as much as they just left. Last and presumably least, Fenmarel is the god of scapegoats, which is vastly confusing. Do you pray to him when you need a scapegoat or when you are a scapegoat?

6) Baravar Cloakshadow
This Gnomish deity is the god of illusions, protection and deception. He’s also the god of “hatred of goblinoids,” the races of monsters who tend to gives gnomes the hardest time. While goblins are patently evil in the D&D-verse, they are sentient, making Baravar is a God of Very Specific Racism.

7) Eilistraee
To know Eilistraee, you have to know the Drow. The Drow are a race of evil elves who live underground and basically spend all their days murdering each other because they’re so damn evil. The has been one good Drow in the hstory of D&D, and that’s Drizzt Do’Urden, who is one of the Mary Sue-iest characters in all of fiction — and he’s been the star of countless novels and is the only reason any D&D player has even been interested in the Drow, of which now there is a terrifying amount of material. Anyways, Eilistraee is apparently the goddess of good Drow, which means she has one worshipper on the planet. This is nonsense.

8) Khurgobaeyag
The Goblin god of slavery, oppression and morale, the last of which seems completely incompatible with the first two. It’s like being the god of fire, heat, and popsicles — it just doesn’t make sense.

9) Wastri
The god of amphibians… and a god of self-deception and bigotry. Now, obviously, being a god of frogs and bigotry is amazing, especially this very like means that all amphibians in Dungeons & Dragons are unrepentant bigots, to the point where they pray for help in maintaining their bigotry. But let’s not overlook the fact that Wastri is also the god of self-deception. If you’re praying to Wastri so you don’t realize something… haven’t you already failed? And if you have deceived yourself, how do you know to pray to Wastri for thanks? I don’t think Wastri thought this through. Probably too busy dealing with all those racist frogs.

10) Amaunator
This deity from the Forgotten Realms was the god of bureaucracy, and actually died because no one worshipped him. Seriously.

11) Sharess
This minor Forgotten Realms goddess is the “deity of hedonism, sensual fulfillment, festhalls, and cats.” Her commitment to both hedonism and cats is such that her appearances is of a very well-endowed woman with a cat head. Wikipedia states “She has the individualistic and hedonistic personality of a feline and she is constantly grooming herself to ensure her appearance is always up to standards.” I think if you’re a god with the power and desire to clean your butthole with your tongue, then you have definitely earned the right to be the deity of hedonism.

12) The Lady of Pain
So technically, no one really knows if this immensely powerful entity from the D&D’s Planescape setting is a god or not. That’s because any time someone tries to worship her, she kills them in the most painful way possible. However, she’s definitely immortal, giant, and if her shadow so much as falls on you, you will die in incredible agony.

13) Blipdoolpoolp
The goddess of the Kuo-toa, who are basically merpeople in the Creature from the Black Lagoon sense. According to Wikipedia, Blibdoolpoolp usually takes the form of a 20-foot-tall (6.1 m) nude human female, with a lobster’s head and claws in place of humanoid parts. At close range, her gaze causes insanity” which makes perfect sense to me. Still, best deity name ever.

When it comes to ransomware, you don't always get … END_OF_DOCUMENT_TOKEN_TO_BE_REPLACED

Peyton Carr is a financial advisor to founders, … END_OF_DOCUMENT_TOKEN_TO_BE_REPLACED