You are here: Home / Weather / The Moral And Scientific Urgency Of EPA’s Clean Power Plan 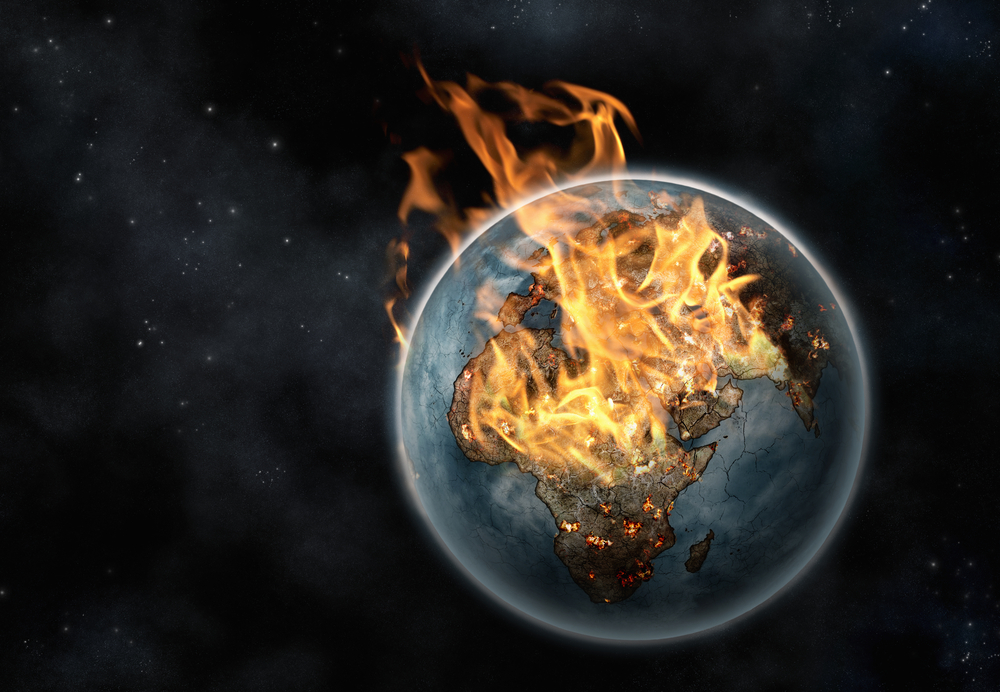 The next few years are unprecedented in human history. We know with unusually high scientific certainty that the near-term choices we as a nation and a species make about carbon pollution will determine whether or not we will destroy our livable climate in the coming decades — thereby ruining the lives of billions of people irreversibly for centuries to come.

We have no right to destroy the soil (and other elements of a livable climate) for our children and future generations — a point founding fathers like Thomas Jefferson made clear he viewed as universally self-evident in a letter 1789 letter to James Madison.

And so we as a nation have a moral imperative to act. The world’s top scientists and governments could not be clearer on that point. Nor could the Pope be in his recent climate encyclical.

We can and should debate what type of action is necessary to act in a moral fashion in these unprecedented times. But it is no longer a rational or moral option to continue being entranced by the Siren song of “technology, innovation, blah, blah, blah” from conservatives like Jeb Bush and other rejectionists who simply oppose all strategies that could plausibly achieve the kind of steady and serious ongoing reductions we need — pricing carbon pollution or regulating carbon pollution.

The stakes behind the CPP are simply too high, as the leading opponents of action have made all too clear. For instance, Senate Majority Leader Mitch McConnell (R-KY) has not merely urged states to ignore the law’s requirement for them to put forward a state implementation plan to meet the EPA’s proposed Clean Power Plan standards. In one of the most shocking statements ever issued by any U.S. political leader, McConnell actually admitted publicly that his goal is to stop a global deal to avert catastrophic climate change. I’ll return to this key point below.

It was the (primarily) conservative opposition led by McConnell that brought down the 2009 House climate bill in the Senate. That opposition left President Obama and the EPA no choice but to put on the table a plan to enact carbon pollution standards for existing power plants.

Obama’s actual Clean Power Plan is the bare minimum the United States can do and remain a moral nation. Here’s why.

The Law Says So

First, it’s the “bare minimum” because the Supreme Court made clear back in 2007 that the EPA is legally obligated to put in place standards to reduce carbon pollution from mobile sources like cars (which it has done) and then stationary sources like power plants (which is what the Clean Power Plan covers) — once carbon pollution is found to be endangering public health, which it obviously is. After Senate conservatives rejected new legislation that would have reduced carbon pollution from power plants, something like the CPP became legally inevitable.

The Rest of the World Is Acting

Second, the CPP is the bare minimum because it’s part of an overall U.S. carbon reduction target that itself is the bare minimum we can do. The current U.S. climate target announced in advance of the big Paris climate talks this fall is a 26 to 28 percent reduction in U.S. greenhouse gas (GHG) emissions by 2025 compared to 2005 levels. That is “equivalent to 14–17% below 1990 levels of GHG emissions.” We can compare that target to the one from the European Union, which is “at least 40% domestic greenhouse gas emissions reductions below 1990 levels by 2030.”

“The US climate plans are at the least ambitious end of what would be a fair contribution,” as the Climate Action Tracker (CAT) puts it. “The reduction target could therefore be strengthened to reflect the United States’ high capability and responsibility.” The CAT is “independent scientific analysis produced by four research organisations tracking climate action and global efforts towards the globally agreed aim of holding warming below 2°C, since 2009.”

The U.S. should be doing at least as much as the European Union if not more, as this chart of cumulative carbon pollution from 1850 to 2011 makes clear.

It is cumulative carbon dioxide emissions that determine a country’s total contribution to the climate crisis. Since the EU is more than two dozen countries, this chart makes clear that the United States is the biggest historical contributor to current atmospheric CO2 levels of any country by far. Again, U.S. inaction is immoral.

At the end of his encyclical, the Pope called on God to “Enlighten those who possess power and money that they may avoid the sin of indifference, that they may love the common good, advance the weak, and care for this world in which we live. The poor and the earth are crying out.” So not only do we bear the most responsibility for the current problem, we are the country with the most power and money to do something about it — power and money we achieved to a great extent by fossil fuels.

The Alternative Is Catastrophic

Third, the Clean Power Plan is the bare minimum we can morally do because it’s part of an overall U.S. carbon reduction target that itself is not adequate to avoid the 2°C (3.6°F) total that the world’s leading scientists and governments have repeatedly agreed is the absolute limit the world can risk. That temperature target in turn requires rich countries such as the United States to reduce CO2 emissions by more than 25 percent in 2020 versus 1990 levels — a cut that even our 2025 target doesn’t achieve — and ultimately cut CO2 emissions by more than 80 percent in 2050 versus 1990 levels. Even with the CPP, we are nowhere near that target.

Moreover, a truly rational and moral species would stay as far below 2°C as is technically possible. If that point wasn’t obvious before the last year, it is painfully obvious now. As we reported in May, the parties to the U.N. Framework Convention on Climate Change (aka the world’s leading nations) set up a “structured expert dialogue” from 2013 to 2015 to review the adequacy of the 2°C target. The 70 top climate experts reviewed the IPCC Fifth Assessment report — and all the literature in the past two to three years that the IPCC didn’t make use of. Their bottom line:

“The 2°C limit should be seen as a defence line … that needs to be stringently defended, while less warming would be preferable.

Why? Because “Significant climate impacts are already occurring at the current level of global warming” (which is about 0.85°C) and so additional “warming will only increase the risk of severe, pervasive and irreversible impacts. Therefore, the ‘guardrail’ concept, which implies a warming limit that guarantees full protection from dangerous anthropogenic interference, no longer works.“

And it always bears repeating that inaction is doubly immoral because every major country has the knowledge that action is so damn cheap — especially compared to inaction — because that’s what all the independent economic analyses and all of our real world experience cutting emissions demonstrate.

Given the science discussed above, readers may wonder how the CPP is even the “bare minimum” we can do. The answer to that is simple.

The 2025 target that Obama has pledged — and which the CPP enables — was sufficient to get China to make its three game changing commitments last year: 1) to peak CO2 emissions in 2030, 2) to peak in coal use in 2020, and 3) to double its carbon-free power capacity between 2015 to 2030, essentially building an entire new U.S. electrical, but one with no carbon emissions.

That dual commitment broke the long-standing logjam in international climate negotiations between developed and developing nations — and it resulted in a flood of commitments from other countries, which has created the genuine possibility of a breakthrough climate deal in Paris.

You can’t judge our CO2 commitment or any country’s commitment on whether it is sufficient to keep the world below 2°C — because none of them are. As I explained in February and again in July, that’s because 2°C will require deeper and deeper commitments for 2040 and 2050 and beyond until total global emissions hit zero and then beyond that until they go negative. No major country is prepared to take on such long-term obligations, especially given the last quarter-century of relative inaction by so many major countries — especially ours.

Again, Paris is focused on stanching the bleeding with a tourniquet. The goal has always been to get firm global commitments from the big emitters to meet serious targets in the 2025-2030 timeframe so we can get off our current emissions pathway — a pathway that would blow past 4°C (7°F) warming, ruin a livable climate for centuries and make feeding 9 billion people post-2050 an unimaginably difficult task.

The significance of the Clean Power Plan in enabling a climate deal is clear from the fact that the fossil-fuel-funded opponents of action, led by Sen. McConnell, have desperately been trying to kill a Paris deal by persuading the rest of the world that America won’t meet its obligations.

But the truth is that we can and will meet those obligations — and I am certain in fact this nation will surpass them. Why? As morally and scientifically urgent as the EPA’s Clean Power Plan is now, that urgency is going to grow exponentially over the next few years, as global temperatures and extreme weather soar, as the dire nature of our situation becomes painfully obvious to more and more people.

As Dr. Martin Luther King, Jr said (“echoing the words of 19th century abolitionist and Unitarian minister Theodore Parker”): “The arc of the moral universe is long, but it bends toward justice.” The bend occurring now is a true inflection point in human history. Some may bet against justice and morality prevailing, but not me.

When it comes to ransomware, you don't always get … END_OF_DOCUMENT_TOKEN_TO_BE_REPLACED

Peyton Carr is a financial advisor to founders, … END_OF_DOCUMENT_TOKEN_TO_BE_REPLACED