You are here: Home / Technology / This Huge Engineering Project May Be Our Best Chance At Colonizing Space 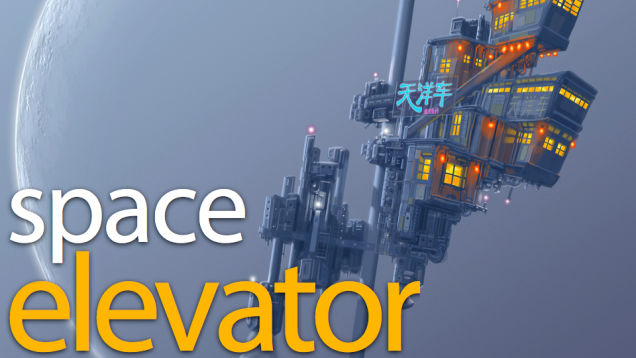 Space colonization has reached an impasse, for reasons far more fundamental than a lack of money for the Space Shuttle program. There is simply no way humans can travel easily offworld without using massive amounts of rocket fuel to escape the gravity well — and that’s both expensive and environmentally unsustainable. So how will we get off this rock?

That was the subject of a three-day conference I attended at Microsoft’s Redmond campus in 2011, where scientists and enthusiasts talked about plans to build a space elevator. This enormous engineering project would allow us to haul materials, and eventually people, into high orbit without rockets. Some say the project could get started within a decade, and NASA is offering prizes of over $1 million to people who can come up with materials to make it happen. Here’s what needs to happen before you can ride an elevator into space, according to speakers at the Space Elevator Conference.

Physicist and inventor Bryan Laubscher kicked off the conference by giving us a broad overview of the project, and where we are with current science. The working design that the group hopes to realize comes from a concept invented by NASA scientist Bradley Edwards, who wrote a feasibility study of space elevators in the 1990s called The Space Elevator. His design calls for three basic components: A robotic “climber” or elevator car; a ground-based laser beam power source for the climber; and an elevator cable, the “ribbon,” made of ultra-light, ultra-strong carbon nanotubes.

Edwards’ design was inspired, in part, by Arthur C. Clarke’s description of a space elevator in The Fountains of Paradise.

The elevator’s design is fairly simple. It’s attached to the Earth at the equator, probably on a floating platform off the coast of Ecuador in international waters. The ribbon stretches 100,000 kilometers out into space, held taut by a counterweight that could be anything from a captured asteroid to a space station. Along the thread would be way stations where people could get off and transfer to orbiting space stations or to vessels that would carry them to the Moon and beyond.

We have some basic problems to surmount, from weather and space junk wrecking the elevator ribbon to the legal status of such a structure. Who would it belong to? Would it be a kind of Panama Canal to space, where everybody pays a toll to the country who builds it first? Or would it be supervised by the UN space committees? But before we get to the point where we’re dodging micro-meteorites and dealing with elevator tolls, we need to surmount some technological obstacles to building the space elevator.
Here’s where we are in terms of the space elevator’s basic components.

The Robotic Climber, or Elevator Car

It turns out that this is the easiest part of the equation. We already have robotic climbers that can scale ropes and lift incredibly heavy objects. This aspect of the space elevator is so widely understood that the Space Elevator Conference sponsored a “kid’s day” which included lego space elevator climber races. Robots designed by teens and kids competed to see which could climb “ribbons” attached to the ceiling and place a “satellite” at the top.

Of course it will take some effort to get from lego climbers to lifters big enough to haul components of a space hotel up through thousands of kilometers of atmosphere and space. But this is within the capabilities of our current technology. So we’ve got our elevator car.

One of the many arguments in favor of a space elevator is that it will be environmentally sustainable. Without chemical rockets, how will we send our robot lifters scuttling up that cable? The dominant theory at this point is that we’ll have lasers on the space elevator platform, and a dish on the elevator that will capture the beam and convert it to power. This technology is also within our reach.

In 2009, NASA awarded $900,000 to LaserMotive for their successful demonstration of this so-called “wireless power transmission” for space elevators. In 2012, NASA will offer a similar prize for a power-beaming lunar rover. The biggest problem with the power beaming idea currently is that we are still looking at fairly low-power setups, and as the space elevator ascends higher into the atmosphere the beam will scatter and be blocked by clouds. Some conference participants estimated that only 30 percent of the beam would reach the dish.
Still, we have seen successful demonstrations of this technology, and companies are working on refining the technology. We don’t quite have our perfect power beam yet, but it’s on the way.

This was by far the most interesting and contentious topic at the Space Elevator Conference. An entire day was devoted to technical discussions about cutting-edge nanomaterials research and carbon nanotube production. Scientists from nanomaterials labs at Rice University and University of Cincinnati gave presentations on everything from how to spin carbon nanotubes into fiber that looks like soft, black cotton, to how radiation in space could rip the molecular bonds of a carbon nanotube ribbon.

Carbon nanotube material is so light and strong that the elevator cable itself would be thinner than paper. It would literally be a ribbon, possibly several meters across, that the robotic cars would grip all the way up into space. Every year at the Space Elevator Conference, people bring carbon nanotube fibers and compete to see which can withstand the greatest strain before breaking. Winners stand to gain over a million dollars from NASA in its “strong tether” competition; sadly, this year, nobody had fibers that were strong enough to place (but you can always enter next year!).

The problem that all these researchers pointed out to us is that we are years away from having a working “ribbon” made of carbon nanotubes. Though the microscopic tubes on their own are the strongest material we’ve ever discovered, we need to make them into a “macromaterial,” or something that’s big enough to actually build with. And making that transition into a macromaterial can be difficult, as University of Cincinnati chemical engineer Mark Haase told io9 in this interview.

Basically the elevator cable is our showstopper. As Haase puts it, we need to invent an entirely new material and then figure out how to string it between the Earth and a counterweight without it breaking. That’s not a trivial problem, even once we reach the point where we can create a carbon nanotube ribbon. Breakage could come from storms back on Earth, which toss the platform around; they could come from lightning striking the incredibly conductive carbon nanotube material; and they could come from space debris, micro-meteorites, or even just radiation.

How do you dodge an incoming piece of space junk that’s headed right to your elevator ribbon? Engineer Keith Lofstrom suggested mounting the ribbon on a massive maglev platform designed to move the line in any direction very rapidly, basically yanking it out of the way. Rice University materials science researcher Vasilii Artyukhov suggested that we might not want to use carbon nanotubes at all, because they break in several predictable ways, especially when they’re under constant strain and bombarded with cosmic rays from the sun. He thought an alternate material might be boron nitride nanotubes, though these are even more experimental than carbon nanotubes at this point.

So we’ve got your elevator; we’ve got your power source; but we still don’t have a cable you can use to climb out of the gravity well. When will we have it? We only have educated guesses, but it could be as soon as five years from now and as far away as decades. It all depends on whether carbon nanotubes turn out to be the material that changes the world. And help us leave the Earth in the process.

When it comes to ransomware, you don't always get … END_OF_DOCUMENT_TOKEN_TO_BE_REPLACED

Peyton Carr is a financial advisor to founders, … END_OF_DOCUMENT_TOKEN_TO_BE_REPLACED