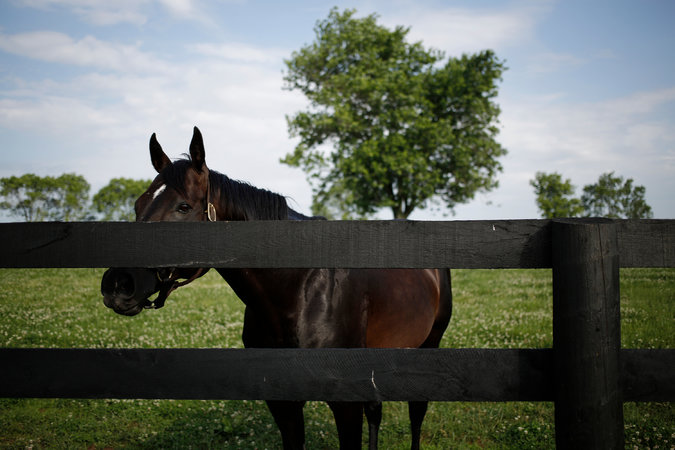 VERSAILLES, Ky. - One by one, the stallions marched into the brick-and-stone breeding shed for a date that, if successful, would cost the mare’s owners anywhere from $5,000 to $100,000. Most of the stallions - including Bellamy Road, whose nickname around the barn is Bam Bam –  knew exactly why they were there and consummated the relationship within minutes.

But one stallion at the bucolic WinStar Farm was having none of that. He has to be in the mood and tends to be picky, especially when it comes to the opposite sex. The problem is that this stallion is no ordinary horse; Pioneer of the Nile is the sire of this year’s Kentucky Derby and Preakness Stakes winner.

Because of his quirks, Pioneer of the Nile is the last stallion brought into the breeding shed, often directly from his three-acre paddock, and he and his date are able to have complete privacy, except for four handlers wearing gloves, helmets and flak jackets who coax him along with soothing sounds and phrases like “Come on, buddy.”

The mares take hours to get ready. They are bathed, bandages are placed on their tails to keep them out of the way, a leather shield is placed over their necks to protect them from biting, and bootees that resemble boxing gloves are placed on their hind hooves in case they kick. There is a teaser horse named Spots who gets things started by warming them up. The stallion merely needs to show up and get aroused.

During a recent mating session, Pioneer of the Nile was a perfect gentleman while nuzzling and licking his date. He required nearly 20 minutes of foreplay, which included a whiff of pheromones from a thawed cup of mare urine, and four mounts to finish the job.

Afterward, Pioneer of the Nile was in no rush to leave.

“He’s a little bit of a prima donna,” said Larry McGinnis, WinStar’s stallion manager, who is also known as the farm’s resident horse psychologist. “Part of this job is learning how to get along with these guys. They develop strong personalities over years of breeding and being a good racehorse, but one thing in common that I see with all these guys is that most of them are pretty smart.”

WinStar has 20 stallions, a who’s who of the racing world that includes three horses who were raced by American Pharoah’s owner, Ahmed Zayat. Before the Derby, the Zayat family came to see its horses and dined in the opulent lobby of the stallion barn, which was built in 2013 and houses photographs and trophies of the stallions inside, notably Super Saver, the homebred winner of the 2010 Derby. The farm’s star logo is omnipresent.

“We just have a real good relationship with Mr. Zayat, so when he gets stallion prospects, we get a seat at the table,” said Elliott Walden, who since 2010 has been the president and chief executive of WinStar, which owns 25 percent of Pioneerof the Nile. “Typically once you get one and you do a good job, then it creates more business, and that’s sort of what’s happened.”

Stud fees, which are due when a foal stands and nurses, are determined ahead of each breeding season, which runs from mid-February to June. Pioneer of the Nile, who has sired Derby, Preakness and Belmont contenders, currently commands $60,000 per foal. Because of American Pharoahâs Derby and Preakness victories, his fee is expected to jump next season to about $100,000, which would tie him with Distorted Humor as the priciest sire on the farm. Walden said he was unsure how much the fee would jump if American Pharoah were to win the Belmont Stakes on Saturday and become the first Triple Crown winner since 1978.

“That’s certainly something to think about,” he said while watching the farm’s 2-year-olds train. “It’s neat to think about the possibility of having the only living sire of a Triple Crown winner. So we’re definitely tied in and interested to see what happens.”

That did not stop WinStar from planning to enter in the Belmont the 10th-place Derby finisher Carpe Diem, who is co-owned with Stonestreet Stables. (He was later withdrawn from consideration.) Walden, who trained Victory Gallop and denied Bob Baffert and Real Quiet a Triple Crown sweep in 1998, said he had been rooting for Carpe Diem in the Derby. But when the horses turned for home and he was not a factor, Walden jumped on the American Pharoah bandwagon.

“It happens with some regularity that we’re running against ourselves,” Walden said. “The way that Kenny Troutt, who owns WinStar, looks at it is, he’s not comfortable until he can have 12 entries out of 12 entries.”

Pioneer of the Nile likes to do things his way, which includes standing facing the breeding shed while his counterparts face forward for prospective breeders. Because he does not like to be hot, he is the only horse in the barn who has his own fan in his stall, a corner suite that has sweeping views of the farm. He prefers peppermints to carrots, which are American Pharoah’s snack of choice. Like American Pharoah, Pioneer of the Nile has a gentle nature.

“He’s a really good horse to be around,” said McGinnis, who lives on the farm near the stallion barn. âNot too many stallions you can go up and pet them without them trying to bite you. And he just lets you rub all over his face and do whatever you want.”

Other similarities between father and son are on display when American Pharoah steps on the racetrack. Baffert trained both horses, and while Pioneer of the Nile, who finished second in the 2009 Derby, had a longer body, they moved the same way.

“Pioneer of the Nile had a big, long stride,” Baffert said. “And he had that same springing motion as American Pharoah, whose acceleration is pretty remarkable. He can get to a spot really quick.”

Baffert said he thought American Pharoah’s success could be traced to the top of his pedigree, which includes Pioneerof the Nile’s sire, Empire Maker, who won the Belmont in 2003, and his dam, Star of Goshen. (American Pharoah will go to Coolmore’s Ashford Stud when his racing career ends.)

“Every time I work him, I go back and look at the pedigree, and I go, What is going on here?â Baffert said jokingly. “I think it comes from Pioneer of the Nile, and it comes from his mother, Star of Goshen. She was a freaky filly, really, really fast.”

As American Pharoahâs Triple Crown quest draws to a close, so does Pioneerof the Nileâs breeding season. He breeds twice a day and three times every other day, at 8:30 a.m., 2:30 p.m. and 6:30 p.m. Like the other stallions, he spends the night in his own lush paddock, under the supervision of security guards. There are also security cameras throughout the grounds. In the morning, he eats breakfast and is groomed, and then the breeding routine begins anew.

On Saturday, when American Pharoah tries to secure a place in the history books, Pioneer of the Nile and his handlers will be hard at work trying to produce future champions. The handlers do not allow themselves to think about the possibility of a Triple Crown sweep, but they know it would change things.

“I don’t usually get nervous about values of horses, but I’d be a little nervous with him,” McGinnis said of caring for the sire of a Triple Crown winner. “But at the end of the day, he’s a horse, and that’s the way you have to treat him.”

When it comes to ransomware, you don't always get … END_OF_DOCUMENT_TOKEN_TO_BE_REPLACED

Peyton Carr is a financial advisor to founders, … END_OF_DOCUMENT_TOKEN_TO_BE_REPLACED