You are here: Home / World / U.S. Finally Getting Pipeline Safety Chief After Year Without One 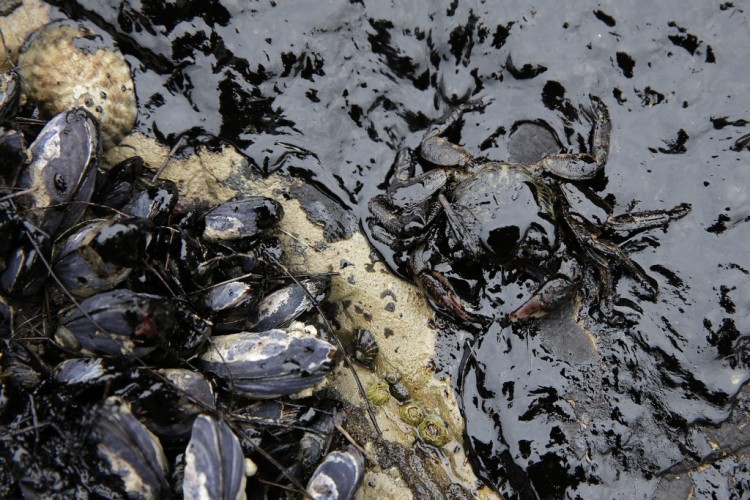 California mussels and a crab are covered in oil at Refugio State Beach, after a pipeline spilled more than 7,700 gallons of oil this May. The important but little-known agency responsible for ensuring the safety of oil pipelines hasn’t had anyone officially sitting in the top spot since October of 2014.

But that will soon change, at least if a recent Senate hearing was any indication.

On Wednesday, the Senate’s Commerce Committee held a confirmation hearing for Marie Therese Dominguez, slated to be the next administrator of the Pipeline and Hazardous Materials Safety Administration (PHMSA). And though confirmation hearings for Obama administration appointees have often been tense, senators from both sides of the aisle appeared ready, if not eager, to confirm Dominguez for the position.

“I didn’t get any sense that anybody didn’t want to confirm her,” Carl Weimer, executive director of the nonprofit Pipeline Safety Trust, told ThinkProgress. “I think everybody recognizes that there’s a void there, and they want to fill that void.”

The House also seems to have bipartisan support to improve pipeline safety by tackling problems at the agency. At a subcommittee hearing last week, members of the House Energy and Commerce committee pressed acting PHMSA head Stacy Cummings on what they saw as a greater need for pipeline inspection and enforcement of rules.

Along with ensuring the safety of America’s 2.5 million-mile oil and gas pipeline system, PHMSA (pronounced “fim-sa”) is supposed to protect humans and the environment from oil trains and other transportation methods for hazardous materials. But the agency has faced serious challenges in implementing safety measures. POLITICO, which has covered the agency’s failures extensively, noted in May that the agency often allows industry to self-police, which has “helped stymie safety initiatives for years.”

Meanwhile, a boom in fossil fuel production in the United States is increasingly stressing pipeline infrastructure to the point of catastrophic failure. As POLITICO reported in May, pipeline accidents have caused more than 170 deaths, 670 injuries and $5 billion in property damage in the last 10 years. Without an official chief of U.S. pipeline safety, those accidents have been all the more marked.

Dominguez has been acting as deputy administrator of PHMSA since just a few weeks ago, and Wednesday marked her confirmation hearing to be the official administrator. Her nomination by President Obama back in May came as a surprise to some, as Dominguez — who last served as principal deputy assistant secretary of the Army — had no experience dealing with pipelines or hazardous materials.

“She’s kind of an unknown quantity,” Weimer said. “It was kind of a surprise when she got the nomination, because we thought we knew all the names who would be in the hat, and hers was a name new to us and industry groups.”

Dominguez’s strength, however, may come from somewhere else — not experience with pipelines, but experience with stress. Weimer said that, from what he has heard, Dominguez had a lot of experience “going through organizations with significant change.”

“While she doesn’t have a lot of experience on pipelines and railroad safety, maybe they’re looking for someone who is going to lead PHMSA through an expansion,” he said.

An attempted expansion is certainly underway. Congress recently approved a $250 million budget bill for the agency, an increase by $120 million over last year. Dominguez said at Wednesday’s hearing that, as deputy administrator, she has been using that money to expand the agency’s staff by more than 100 people. She said a large majority of those new employees would be pipeline safety inspectors, though she also noted the agency faces stiff hiring competition with actual oil pipeline companies who are looking for people with similar expertise. About 40 of those 100 positions have already been filled, Dominguez said.

While Dominguez did face questioning from Democrat and Republican senators at Wednesday’s confirmation hearing, most of them were decidedly softball. Sen. Dan Sullivan (R-AK) arguably pressed her the hardest, at one point asking Dominguez whether she agreed or disagreed with President Obama’s decision to veto a bill approving the controversial Keystone XL tar sands pipeline.

Dominguez responded with a pause and an awkward laugh, and Sullivan walked back the question.

“You don’t have to answer that,” Sullivan said. “I won’t hold that against you.”

When it comes to ransomware, you don't always get … END_OF_DOCUMENT_TOKEN_TO_BE_REPLACED

Peyton Carr is a financial advisor to founders, … END_OF_DOCUMENT_TOKEN_TO_BE_REPLACED